Reader's Choice: The Place Without Limits (1978) 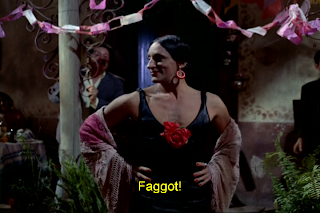 After finally watching the film, I'd be remiss not to bring up the fact that the above synopsis is slightly inaccurate. Manuela is indeed a transvestite who runs a bordello with his daughter, and he's also quite fond of flamenco. There's also a land baron named Alejo, whose finally conquest in the small Mexican town where the film takes place is the acquisition of Manuela's whorehouse. The synopsis, however, paints him as the antagonist when it's in fact not the case at all. And his "henchman" is actually his grandson, Pancho, who has no business ties to Alejo whatsoever.

The movie opens with Pancho returning to the town where the film takes place after being gone for a few months. Manuela becomes aware of his return and suddenly panics. Judging by Manuela's reaction, it's apparent they've had an encounter in the past which ended violently and not in Manuela's favor. We're then introduced to Japonesita, who everyone calls "Jap" for short, as well as the prostitutes who reside with Manuela; collectively they function as more of a family than a business. As with all families, though, there's bickering: Manuela wants to sell the house, but Jap's pride and stubborn nature prevents her from agreeing to do business with Alejo. 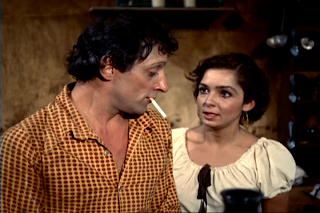 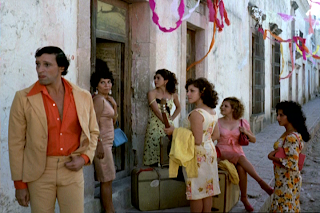 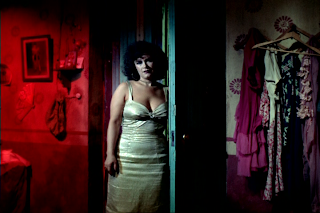 So, how does friction between a transvestite and his daughter, and the potential acquisition of their home, act as a commentary on "machismo culture" and homophobia? Well, it doesn't, but without spelling the entire movie out for everyone, I'll just say that there are numerous moments in the film that are obviously a commentary on homophobia and prejudice, as well as what appears to be director Arturo Ripstein using the film to take a jab at men (Pancho) who use macho attitudes to mask sexual insecurity. The message is as plain as day by the time the film comes to its conclusion, but the film as a whole is more or less a soap opera with a social commentary.

I honestly wasn't expecting to like THE PLACE WITHOUT LIMITS (I thought maybe Neil was pulling a fast one on me, what with the crazy synopsis and all), but I ended up enjoying it quite a bit. I was impressed with the visuals in particular - the vibrant color scheme, the set and costume design, and the general cinematography. I especially liked the lengthy flashback sequence placed in the middle of the film, which is shot beautifully and also explains how Japonesita came to be, considering her father (who's always referred to in the film as a female) is 100% homosexual. The flashback sequence also puts Manuela into perspective; he went from being an outgoing and flamboyant person to being somewhat sheltered as a result what he's endured emotionally. Otherwise, I can't think of much to say about it. My only complaint is that the first act was extremely talky and I spent the duration of it trying to follow along with the subtitles instead of watching the actions unfold, but other than that it was surprising in many ways, paced well, and thoroughly engaging.