SIX-STRING SAMURAI is an ambitious indie film that was apparently all the rage at various festivals upon its release, and it's gained a cult following ever since. I guess. I tried watching it a while back and couldn't even get through it, for one reason in particular that I'll eventually get to, but seeing as I'm a man of the people I decided to give it another go and put my patience with this film to the test.

The is a post-apocalypse film that follows Buddy (a Buddy Holly lookalike), armed with his trusty samurai sword and guitar, as he embarks on a quest to the rock n' roll sanctuary known as Lost Vegas, which sits in the middle of the desert like a mirage amidst the nuclear wastelands. It's apparently Buddy's destiny to replace the fallen "King" of Lost Vegas, which would explain his determination to trek through hundreds of miles of desert and battle numerous post-apocalyptic warriors in the process. For some reason, Buddy's also being trailed by the Grim Reaper and his minions, but his main concern, ironically, is his only ally - an obnoxious orphan who relentlessly follows him around since being rescued from a group of barbarians by the guitar-slinging samurai. 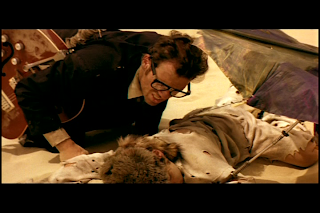 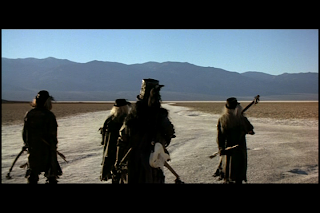 SIX-STRING SAMURAI is all over the place in terms of its style. I wouldn't go so far as to call it "genre bending", but it's like the director blew his load and tried to incorporate as many ideas as he possibly could into the film. The results could have been a disaster, but thankfully the final product shows evidence of a filmmaker who at least had a solid vision of what he wanted to do. Despite lacking what I assume would be the ideal budget for such a project, director Lance Mungia and his crew took full advantage of their outdoor shooting locations and got some outstanding production value. Regardless of what anyone thinks of the film, one can't deny how well it's shot and how great a majority of it looks.

In case anyone's wondering, the reason I quickly (and gladly) gave up on the film during my initial viewing of it is the kid. That motherfucking fucking kid. As I mentioned earlier, he spends the film following Buddy around, which is understandable since his mother was slain early on and he has nowhere to go. The thing is, the kid's apparently a mute, so he constantly grunts, screams, and moans as a means of communicating. It wasn't so much this character trait bothered me, but rather the voice of the child actor, which I found to be extremely annoying and almost unbearable to listen to. I obviously persevered this time around, but it didn't change the fact that I wanted this kid to get his throat ripped out by vultures. 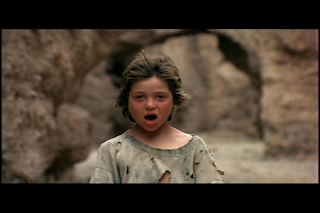 I have to say, I'm somewhat glad that I gave SIX-STRING SAMURAI another shot. I didn't find the story or the characters, or even the cast for that matter, to be particularly interesting, but I was very impressed with the film's style. The cinematography is great despite the abundance and over-use of Spaghetti Western trademarks, and the score - the SCORE, not the surf rock soundtrack by the Red Elvises - is quite good. Part of me still doesn't really care for the film, but another part of me will be fair and give credit where credit is due: SIX-STRING SAMURAI is an entertaining, stylish, and strange little film. An ideal movie to have on in the background when you're busy and don't have the time or patience to invest in something. Unfortunately for Lance Mungia, his career didn't quite take off and he only made one other feature-length film after this.