Led by the squeaky-voiced Lace, the Dagger Debs are a gang of no-bullshit broads who find themselves in the midst of a power struggle once an influential outsider named Maggie joins the fold. Meanwhile their male counterparts, the Silver Daggers, are involved in a war with a rival gang, which spirals out of control and culminates with a deadly shootout in a packed roller rink. Helmed by the man who directed SPIDER BABY and championed by Quentin Tarantino, who released it under his old Rolling Thunder label back in the day, SWITCHBLADE SISTERS is a Shakespearean tale under the guise of a campy and highly-quotable exploitation movie.

It's established right away that the characters come from poverty and are a product of their hard-knocks surroundings. The first time we see the Debs, the slowly pile into an elevator before turning their attention to Lace's mom's landlord and beating the ever-loving shit out of him. Lace is the obvious alpha female, and she's even somewhat attractive in a butchy-but-cleans-up-well kinda way... until she speaks, that is. Actress Robbie Lee seemingly keeps her jaw clenched throughout the film and lets her high-pitched squeal of a voice slip out through her teeth. Lace's second in command is Patch - a skinny blonde gal with an eye-patch over her left eye and a bad attitude. Donut (played by Lenny Bruce's daughter, Kitty) is the overweight gal and the butt of everyone's jokes. 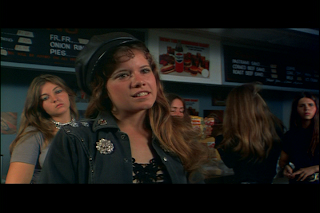 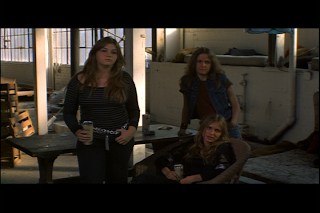 I didn't outright mention it earlier, but the Debs are (for the most part) the girlfriends of the Silver Daggers. If I were one of the Silver Daggers I'd probably date Donut, because 1) she's attractive for a big gal, and 2) most of the Debs either look like dirty lesbians or drug addicts. I bet Donut was great in the sack. Speaking of Donut, one thing I love about gang movies from the 70's and 80's are the nicknames of the members. Most of the nicknames are obviously the result of certain character traits, but I'm still fascinated by the idea of the screenwriters of these sorts of films sitting around and thinking up nicknames. I think this probably has to do with the fact that I'm horrible with coming up with names for anything; if I had a pet dog, I'd probably name it "dog". 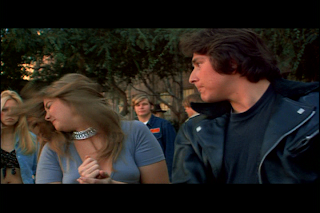 One of the many great things about SWITCHBLADE SISTERS are the visuals, and I mean almost every aspect of the visuals, be it the physical mannerisms of the actors, the costumes, etc. Visually, this movie is very loud; you could watch the entire thing on mute* and still know exactly what's going on. For example, the second you see Lace, before you even know she's a gang member, you know right away that she's someone with a certain level of power. She looks like the chick in prison who'd have control over an entire stable of bitches, so it comes as no surprise when you find out that she's in charge of an entire gang. When you see Patch, you know based on her mannerisms and where she positions herself that she's Lace's right hand. And when you see Maggie for the first time... you know she's trouble. 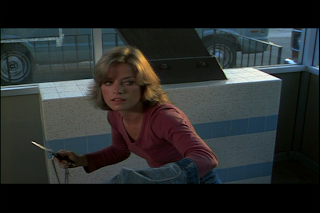 Being the diverse exploitation filmmaker he is, Jack Hill incorporates a tiny bit of the Women in Prison genre into SWITCHBLADE SISTERS when the Debs are sent to a Juvenile Detention Center early on in the film, where they waste no time inciting a riot with the wicked warden and her cronies. Some chick's boobs pop out of her top and you don't even have to look closely to see the wicked warden's stunt double (a male doubling for a female) trying to keep his wig in place as he's getting the tar kicked out of him.

I'd be lying if I told you that I've read any Shakespeare, but I'm familiar enough with some of his stories and have seen enough movies based on his work (thanks, Kenneth Branagh) to understand that the power-struggle aspect of the story is somewhat based on his work (for what it's worth, Hill admits to an Othello influence and Tarantino points out Patch's similarities to Iago on the DVD commentary track). Regardless of the Shakespeare influences, the power struggle and the betrayal elements of the Debs' storyline is something that almost anyone who's familiar with cliques can relate to. There's always the alpha male or the alpha female. In some cases there's someone who inadvertently or purposely jeopardizes the alpha's status. There's always the member of the clique who's level-headed, and there's always the member of the clique who gets picked on. The characters being easy to identify with (despite their absurd behavior) and the fact that it successfully ties into the gang aspect of the film has a lot to do with why SWITCHBLADE SISTERS is so interesting. 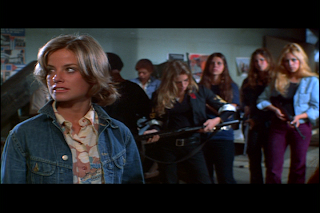 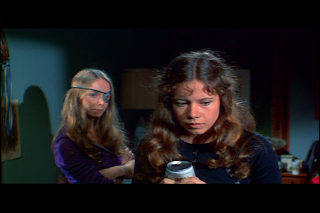 OK, so maybe the Shakespeare talk is a little too deep for a movie like this, or maybe you just don't care. The best way that I can sum up SWITCHBLADE SISTERS is to just say that it's fun. It's not one of those "so bad it's good" movies, or one of those movies that people praise in spite of its shortcomings; it's just GOOD. The story is great, the characters are amazing, and it's very high on replay value. The exploitation elements? Violence, colorful language, a funky musical score, obligatory female nudity, and rape: all present and accounted for.

On a side note, the lovely Marlene Clark, who played Ganja in GANJA AND HESS, appears in the film as the leader of a militant all-black female gang. Robbie Lee and Janice Karman (one of the Debs, identifiable by her trademark white armbands around her jacket sleeves) went on to do voicework on such children's shows as Rainbow Brite and Alvin & the Chipmunks, respectively.

*You could watch the film on mute, but I wouldn't necessarily recommend it; you'd be missing out on some truly great dialogue, like "My old man, God rest his ass.", or "Why don't you stick your head up my ass?"