In the days leading up to Halloween, the aftermath of a bizarre murder-suicide sees an unlikely pairing of the murder victim's daughter, Ellie, and a doctor (Tom Atkins), who team up to get to the bottom of the incident as the police work on their own investigation. Their search takes them to the small town of Santa Mira, where they spend lots of time having sex in a motel room and eventually uncover a conspiracy involving terrorists, Stone Henge, and a plan to sabotage Halloween, spearheaded by an inventor of practical jokes! 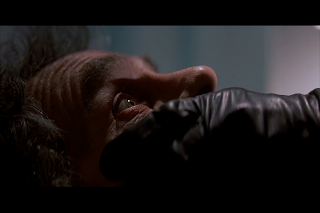 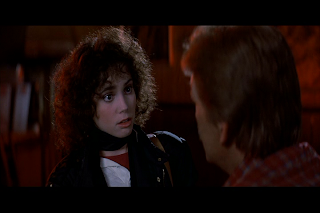 I'm a fan of Tom Atkins, but I'm sorry: the fact that his character hooks up with Stacey Nelkin's character is pretty ridiculous to me. The thing is, Ellie is the one who instigates it - on their first day together, no less! I found it strange that the film portrayed the protagonists as scumbags to a certain extent. Ellie is established as a slut and somewhat of an airhead, while Tom Atkins's character is a deadbeat dad who bails on his kids right before Halloween to basically get out of town for a few days with a much younger woman. 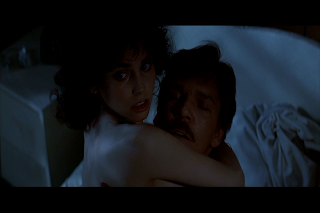 On second thought, maybe Tom Atkins is my hero.

Despite the absence of Michael Myers, HALLOWEEN III still has elements about it that connects it to other films in the series. It's written and directed by Tommy Lee Wallace, but yet it's more of a "John Carpenter film" than some of Carpenter's own output. Scored by Carpenter and shot by Dean Cundey, who also shot the first two films and worked with Carpenter frequently, HALLOWEEN III comes pretty damn close to its predecessors in terms of atmosphere. Also impressive are the amount of effective jump scares in the film, most of which are enhanced by sudden jolts of Carpenter's music (a technique also utilized in the first two HALLOWEEN movies). At times this film can be relentlessly frightening, with a great example being the numerous false conclusions of an encounter towards the end of the film involving Atkins and a certain character who refuses to die.

Some shots in the film reek of ASSAULT ON PRECINCT 13, and the portion of the film where Ellie and Tom Atkins pull back the proverbial curtain to reveal the Wizard is similar to THEY LIVE for reasons that needn't necessarily be mentioned. Plus, there's the whole subliminal message thing and how society is susceptible to being brainwashed because of their exposure to mass media, which is also addressed in THEY LIVE; coincidences, I'm sure, but still noteworthy. As far as other common threads that link HALLOWEEN III to the rest of the franchise, it features a supernatural and astrological twist to the story - a sign of things to come, with later HALLOWEEN entries introducing druids, cults, and other stupid shit. Dick Warlock, who plays Michael Myers... sorry, "THE SHAPE" in HALLOWEEN II, appears in this film as one of the bad guys, and there are two occasions where the first HALLOWEEN film is being shown on television.

I can see why horror fans would champion this film and latch onto it come Halloween season, especially when nostalgia plays a factor. The film looks amazing, the technical aspects are very impressive and parts of it are enjoyable, but HALLOWEEN III tends to drag in spots and I have issues with the pacing (which, to be fair, are issues I have with the first two HALLOWEEN films as well). As someone who has no nostalgic attachment to HALLOWEEN III, I enjoy it because of its atmosphere and visuals, but I could take it or leave it.