I had seen RING OF DARKNESS sitting on the shelf at my local video store for a while now and had planned on checking it out sooner or later, but after reading Heather's review for it (a spot-on review which I recommend checking out) and finding out that it's a horror movie that revolves around a boy band, I knew I had to make seeing it a top priority. The thing is, her review makes it sound like a certain aspect of the film is a mystery, which is what I expected going into the movie, only to find out that this supposed mystery element of the story is spoiled in multiple places: the back of the DVD cover, the trailer, and, of course, the IMDB synopsis. That being said, I'm not even gonna try to tip toe around the film's big reveal (a reveal that comes early in the film, mind you) in this review. 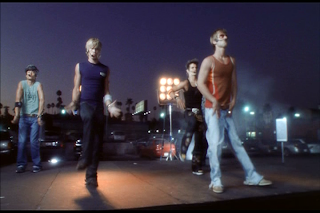 The lead singer of a boy band called Take Ten goes missing after a run-in with a group of hooded figures in the beginning of the film. The band and their publicists blame it on a drug problem. They hold a competition to find a new singer, at which point we're introduced to Shawn, who's the frontrunner to win the whole thing despite his lack of enthusiasm. Shawn claims to be a "real musician" and it's obvious that he's against the whole boy band trend, but his girlfriend Stacy convinces him to at least give it a shot and capitalize on the free exposure should he make the cut. Shawn and a few other guys do a little dance routine on a stage to an audience of about thirty screaming women. The band's manager (Adrienne Barbeau!) looks on in approval, damn near salivating when Shawn hits the stage. 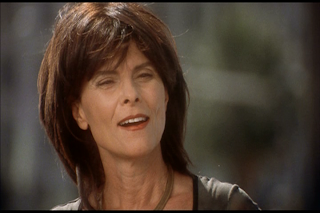 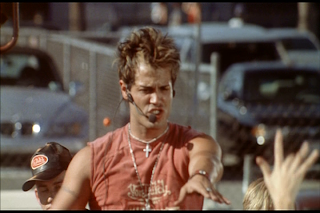 After the initial audition process, the band selects Shawn and two other guys and put them up in a rather luxurious home, where the band will continue to test their candidates for lead singer and see if they have what it takes. Luckily, Shawn brings Stacy along to prevent the rest of the movie from becoming a metrosexual sausage party. That being said, Ryan Starr (former American Idol contestant) is adorable. I love Ryan and would let her do unspeakable, humiliating things to me if the opportunity presented itself, and, because of that, I won't bring up how bad her acting in this is or how she sounds deaf when she talks. 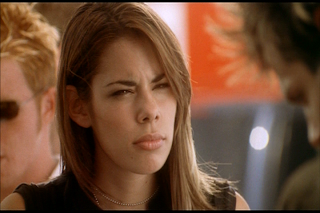 Without giving you a rundown of the whole movie, I'll just say that the lesser two contestants go missing sooner than later. By that time, Shawn makes some bizarre discoveries about the boy band and can't help but notice their generally strange behavior. To say that the boy band are responsible for not only their former lead singer's disappearance, but the disappearances of the guys who were picked to replace him, would be stating the obvious. Again, this is something that's made very clear in the film. It's apparent there's something up with the band, but the "revelation" would be what exactly they're up to. I don't really need to get into details about that, so I'll just say that there's a supernatural twist to the proceedings. Faust much?

One thing that Heather pointed out in her review is that, during the audition process, all of the people who tried out for the band had the same singing voices. I'm not sure if they were actually supposed to be singing or if they were lip-syncing, but whatever the case, this was one of the many cheesy and entertaining aspects of RING OF DARKNESS. It's hard to hate on this movie; it doesn't take itself seriously and it's obviously a lighthearted commentary on the music industry and the boy band trend that was HUGE at the turn of the century and in the early 2000's. The whole aesthetic of the film alone makes it ripe for a party viewing because the characters are such tools. Also, I don't think I've ever seen so much Von Dutch in my life. Throughout the film are these corny music video scenes that feature Take Ten with their previous singer, obviously a dig at how N Sync, the Backstreet Boys, etc. were portrayed in an inherently homoerotic manner in their videos back in the day. While the acting wasn't stellar by any means, everyone at least looked the part. Jeremy Jackson of BAYWATCH fame in particular is great and really hams it up as the douchey spokesperson of the band. A quick glance at his IMDB picture reveals that perhaps this role wasn't too much of a stretch for him. 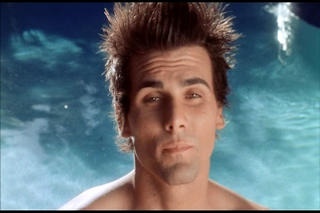 Considering the type of movie it is, there's a certain limit as to how good this movie can be. It's indeed entertaining at times, but story-wise the film spells everything out far too early for it to be remotely interesting. It fails at being suspenseful when it needs to be, and, as I mentioned earlier, the mystery element is non-existent. RING OF DARKNESS is good for a laugh and would be great to watch with a group of people, but like I said, the story isn't particularly compelling, and the outcome is far from original. For what it's worth, Adrienne Barbeau actually plays an important role in the film rather than it being a case of the distributor simply capitalizing on a cameo she made, and the lead actor, Stephen Martines, is decent.