To kick off a very special month on The Death Rattle, I have an interview with a gentleman by the name of Mike Malloy for your reading pleasure. Mike is a journalist, filmmaker, and 70's tough-guy cinema aficionado. In this interview, we talk movies and discuss a few of his current projects, including a highly-anticipated documentary he directed called EUROCRIME!: THE ITALIAN COP AND GANGSTER FILMS THAT RULED THE '70S (currently in post-production), and an upcoming "Abortion Western" he starred in called THE SCARLET WORM. Mike also did an interview with the fellas at the Gentlemen's Guide to Midnite Cinema a while back that you can listen to here, in which Mike goes into great detail about his Eurocrime documentary and a number of other film-related topics. Below you'll also find some exclusive screenshots from the EUROCRIME! documentary provided by Mr. Malloy himself! Enjoy. 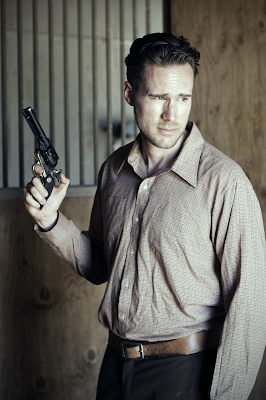 The Death Rattle: It's obvious you're very passionate about film because of how busy you keep yourself with writing, directing, and even acting. Was there a certain turning point in your life that made you a film fan, or was your love for film gradually developed over the years?
Mike Malloy: When I was a sophomore in high school, I somehow ended up with a bunch of friends who were seniors. So after they graduated, I felt very alone at school in my junior year. I started gravitating towards -- and identifying with -- all these loner characters in cinema: Bronson's Depression-era drifter in HARD TIMES, a bunch of Spaghetti Western antiheroes -- hell, even Kowalski in VANISHING POINT. I also identified with characters who were greatly out of their element -- like Jon Voight's character in DELIVERANCE and Joseph Cotten's character in THE THIRD MAN. I went on to get a book contract to write Lee Van Cleef's biography when I was 19 (which was really too young), and I moved out to L.A. and joined the staff of the (now-defunct) CULT MOVIES MAGAZINE. I think I was the only guy working in those cult-film circles who didn't care much for horror, sci-fi or fantasy. To me, it's all been about the tough-guy shit.

DR: Your upcoming EUROCRIME! documentary seems like a promising reflection of the genre. What was your gateway Eurocrime film, and was there anything in particular (movie, director, etc.) that compelled you to want to tell the story of the genre?
MM: There seem to be two general routes to discovering Eurocrime: (a) Horror movies ---> Italian horror movies ---> Italian genre directors' other works ---> Eurocrime. And then there's (b) U.S. tough guys ---> U.S. tough guys' Italian movies ---> Eurocrime. I took route (b), through actors like Van Cleef, Bronson, Savalas and Palance. Again, I dig cinema that rings true to life. And in a way, you can't get much more authentic than the Eurocrime genre, as the real-life organized crime of '70s Italy bled over into the making of the films. Also enhancing the realism was the fact that actors -- even leading men -- performed their own stunts. So once I learned how these films were made, I wanted to tell the story in a documentary. 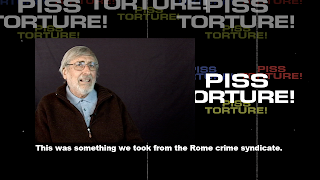 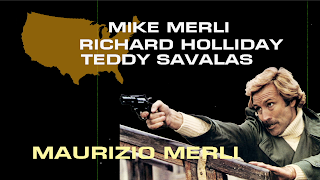 DR: Any particular favorites of the genre, as far as actors, directors, or films?
MM: It's been said a million times before, but actor Maurizio Merli is incredible. Here's what I say about him in the narration of the doc: "In countless polizieschi, he displayed his prowess for one-tracked policework, almost like a flesh-and-blood Robocop. He possessed not only the usual physicality of Eurocrime stars, but also crime-fighting reflexes that seemed almost involuntary, proving that busting no-good hoodlum punks was in his blood down to the cellular level."

DR: In your own words, how would you sum up the documentary, aside from the obvious?
MM: It strives to be exciting and briskly paced, yes. But it also isn't afraid to slam on the brakes now and then and go beneath the surface on a particular subject. That sets it apart, I feel, from some of the recent cult cinema documentaries we've seen, which just beat you over the head with the most sensationalistic soundbites and clips. 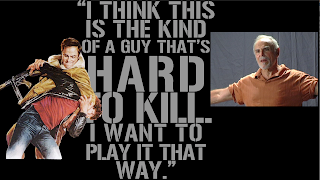 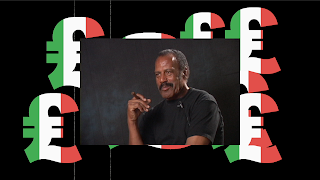 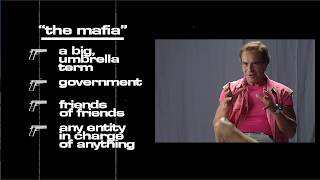 DR: Are there any actors or directors you wanted to interview for the documentary but couldn't for whatever reason?
MM: Well, the one creative demographic we never could get was a composer. We were very close to getting two, but neither interview materialized. It's a shame, as the angry funk soundtracks are almost more popular now than the films themselves.

DR: Is there anything specific about the finished product that you're proudest of?
MM: I'm proud of all the graphics I created that kept this from being a talking-heads doc. We really had a tough time getting behind-the-scenes or historical photos, so I tried to create production value where there was none. It took a lot of extra time, but I'm pleased nonetheless. Talented animator Chad Kaplan also helped in that respect, dramatizing behind-the-scenes stories so that we had cutaways. 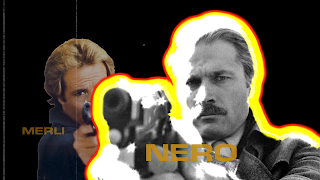 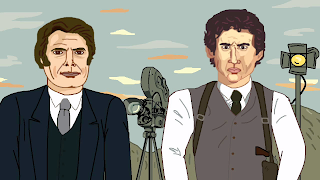 DR: The documentary was quite the project for you, and now that it's pretty much out of your hands are there any other big projects you have lined up?
MM: I'm involved with a number of feature-film projects in development, and I'll be playing my first mobster soon, in a Prohibition bootlegging film. And I have two cinema docs I've been working on -- one of which even takes me out of my beloved 1970s. 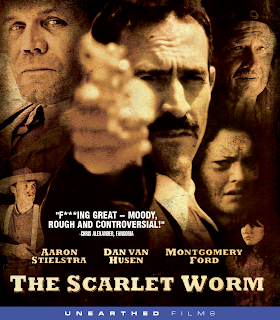 DR: Acting wise, you're starring in an upcoming Western called THE SCARLET WORM. Can you please briefly talk about the film, what it's about, and the character you play?
MM: I'm the secondary villain, er, "heavy," even though my role is just a few scenes. The primary heavy is a demented brothel owner played by cult actor Dan van Husen (SALON KITTY, CUT-THROATS NINE), who mandates abortions on his whores, whether they want them or not. That, in fact, is the story element that sets our Western apart. Without being a message movie, it dares to center around brutal cathouse abortions in the early 20th Century West. I guess that's why, without being a horror Western, we keep getting press in places like FANGORIA and keep getting selected by festivals like The Telluride Horror Show. We had a mainstream distributor approach us about SCARLET, but they wanted to re-title it, downplay the controversial material, and re-package it as a generic shoot-em-up. So we're happy to have ended up with the fearless distributor Unearthed Films. The Blu-Ray and DVD street on December 6.

DR: I'm sure you've seen your share of hard-to-find films, casually and as part of research for the documentary and an aborted book project you worked on years ago, but in this day and age when pretty much everything is accessible, are there still any holy grail films on your radar? And on that note, what's a holy grail film you've actually seen that was the hardest to come by?
MM: I know everyone is on the edge of their seat about THE FARMER -- will Code Red DVD release it or not? That '70s revenger has somehow managed to elude the grey market. Based on the trailer, I don't expect it to be a lost masterpiece of gritty cinema, but I'm curious to see it. Then, there are plenty of rare films that I'm interested to see, and they may be out there, but I've never put enough effort into finding them. Like, I know Roy Scheider did a pair of French Eurocrime movies in the early '70s, but the only one I've seen is THE OUTSIDE MAN. I loved -- LOVED! -- that movie, but for some reason, I've never put any effort into tracking down the other one he made, THE FRENCH CONSPIRACY. Again, it may be out there, but I've never run across it on the gray market or with traders.

As for rare movies I've found, I've collected numerous copies of the hard-to-find pre-record VHS (both British and Italian) of YOU AND ME, the "lost" David Carradine biker movie. Even though David directed himself in the movie, he lost track of the elements and the workprint, and he didn't even have a decent copy on tape. So I was very pleased to give him one of mine. The film was never *really* finished to David's satisfaction; the version released on tape is a pretty rough cut, and that's the version that got a little-seen theatrical release in spotty pockets of the globe. I'd still love to find one of those release prints somewhere, which is something David once e.mailed and asked me to do for him.

DR: Any guilty pleasure movies? Come on, I know there's at least one title you can drop on us.
MM: I wrote the Van Cleef biography while in college, and the cable provided in my apartment building accidentally had some of the premium channels still connected. I remember DISCLOSURE -- the Crichton story starring Demi Moore and Michael Douglas -- was playing in steady rotation, and that was my favorite film by which to procrastinate.

DR: Is there anything you'd like to say or promote before we wrap this up?
MM: At risk of sounding like a dogmatic jerk, I'd just like to say we cult film fans should toughen up a bit. I know some of us dig watching ninjas versus sharktopuses, and mega-crocs versus dino-zombies. But I think we should all watch more Lee Marvin instead. Let's evolve beyond manboys.

DR: Thanks for taking time out of your busy schedule, Mike. Best of luck to you, and I speak for many people when I say that I can't wait to see the EUROCRIME! documentary.
MM: You're the coolest. Most Eurocrime fans are.