It somehow eluded me throughout the 80's and 90's, and it wasn't until a couple of years ago when researching dark fairytale movie adaptations that I came across Neil Jordan and Angela Carter's sexual, nightmarish take on the Little Red Riding Hood folk tale, THE COMPANY OF WOLVES, which features a then 12 year-old British actress by the name of Sarah Patterson in certain scenes that would likely be considered taboo by today's standards.

COMPANY OF WOLVES is written by Angela Carter, who took elements from a number of short stories that she wrote and incorporated them into her screenplay. The film literally plays out like a fever dream, as it opens with a teenager named Alice attempting to wake up her sister, Rosaleen (Patterson), who locked herself in her room prior to falling into a deep sleep. We then apparently go inside of Rosaleen's head, and what follows is a surreal cautionary tale, full of sexual connotations, under the guise of a werewolf movie. 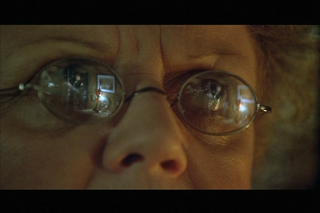 Set in a small, isolated village in the middle of a dreary forest that would make even the most misanthropic of Black Metal musicians feel right at home, THE COMPANY OF WOLVES focuses on young Rosaleen as she experiences a sexual awakening of sorts, while her Granny constantly reminds her of the dangers that lurk in the woods should she "stray from the path" and disobey a set of rules presented to her. It's established early on that a vicious wolf lurks in the woods - the wolf being symbolic of a sexual predator, which is a bit redundant to mention when you consider the source material and werewolf folklore. Rosaleen has obviously reached the point of transitioning from a girl to a young woman, and so her new-found curiosity in the male sex leads her to stray from the path, thus making way for an encounter with a much older stranger who harbors a dangerous secret. 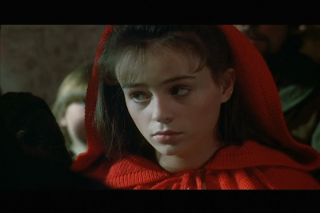 It should be noted that the "monsters" in the film are actual wolves and not the traditinal werewolf or wolf-man, although the wolves do manifest through a transformation process involving their hosts (grown men). But, for the sake of keeping it simple, I'll just refer to them as werewolves. Speaking of which, this movie features some of the most painful-looking werewolf transformation scenes I've ever witnessed in a horror movie; the most notable example being Stephen Rea's transformation scene, in which his skin is completely ripped from his body to reveal the raw muscle, at which point a snout suddenly emerges from his face and the metamorphosis begins. Though cheesy-looking in terms of special effects, the transformation scenes are quite unsettling. 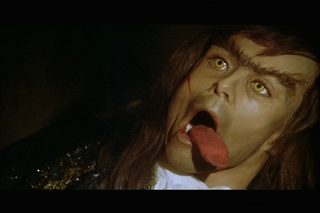 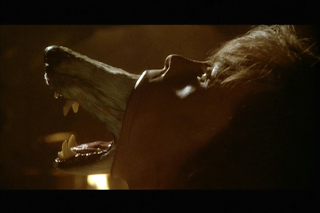 "What ever happened to Sarah Patterson?" is the question I ask myself every time I watch this movie (only seen it twice now, but still). Apparently she lost interest in acting after starring in this particular film (her debut) and went into her next project (Cannon's SNOW WHITE) knowing that it would be her last. She resurfaced over a decade later in a pair of films, seemingly as a favor to filmmaker and friend Lisa Gornick, before vanishing from the acting scene once again. Patterson showed promise and it's a shame that she didn't continue acting, but knowing that her career was voluntarily brief adds a certain amount of cult credentials to THE COMPANY OF WOLVES.

THE COMPANY OF WOLVES is remarkable for its weirdness and ambiguity, and it wouldn't be fair to simply label it as just a horror movie. It actually resembles the surrealist Czech film VALERIE AND HER WEEK OF WONDERS in many ways. Both lead actresses were about the same age, and both were sexualized to a certain extent in their respective films (more so in the case of VALERIE, in which 13 year-old Jaroslava Schallerová appeared nude and was even groped by an older man in one scene). Also, both have a dreamlike atmosphere about them and are littered with sexual symbolism and bizarre imagery. Overall, this is an extraordinary little film and, in my opinion, a cinematic dark fairytale of the highest order. For tons of interesting pieces of trivia on the film, go here.