Starring Ryan Kwanten of TRUE BLOOD fame and Steve Bisley, who's most commonly for his portrayal of Goose in MAD MAX, RED HILL is a modern-day Western set in the Australian outback.

A young by-the-book cop named Shane Cooper (Kwanten) - having just moved his pregnant wife out of the city to reduce her stress levels - spends his first day on the job with the police department of the small rural town of Red Hill hunting down a vicious murderer who just escaped from prison. Under the tutelage of a crusty, hard-assed cop who everyone calls Old Bill (Bisley), the next twenty-four hours will prove to be the longest day of Shane's life as the aforementioned murderer bulldozes through everyone associated with the police department like an unstoppable Aborigine killing machine, be it the cops themselves or trigger-happy locals. It should be said, a revelation early in the film explains why the killer is seemingly going out of his way to target members of the police department. 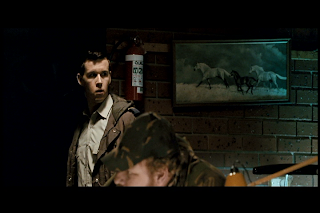 I found a few subtle similarities between RED HILL and other films of the traditional Western and neo-Western varieties. The killer in particular, who's named "Jimmy", reminded me a lot of Anton Chigurh from NO COUNTRY FOR OLD MEN and, to a lesser extent, Leonard Smalls from RAISING ARIZONA. Trust me when I say that I'm not spoiling anything when I explain my reasoning for those comparisons, but if you wanna go into the movie absolutely fresh, feel free to skip ahead to the next paragraph. Though he's not even close to being as intimidating in stature as Chigurh or Smalls, Jimmy, an Aborigine man with Freddy Krueger-esque facial scars, reminded me of those characters because he's almost supernatural in the way that he's presented. You don't know a lot about him, his motives are vague, and you'd think he was invincible judging by how effortlessly he dispatches his targets and miraculously avoids being shot.

Initially, I wasn't particularly impressed with RED HILL because it was a little too straight-forward in its storytelling for my taste, and it plays out in pretty much exactly like I expected it to. Nothing wrong with an uncomplicated film, and at least RED HILL turned out to be a lot more stylish than I anticipated, at times bearing a dark but quirky aesthetic and tone that would be more akin to Nordic cinema. In saying that, however, RED HILL is a film that made me feel like an asshole by the time it was over. You see, I thought I had it all figured out. As soon as the characters were introduced and I got a sense of what direction the film was headed, I gradually began to lose interest, especially since it actually played out just like I had called it. It isn't until around the third and final act of the film that certain revelations are made in regards to... well, just about everything. Without ruining it for anyone, pieces of information are revealed at a certain point that, in theory, should change your perception of the entire film. 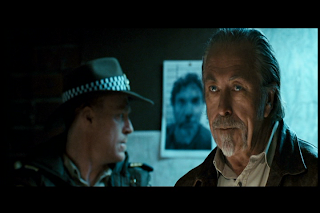 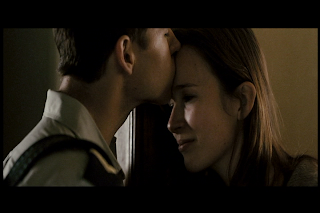 Basically, what you read in the last paragraph was just my fancy way of saying that there's a twist; not a knock-you-on-your-ass twist, but rather a twist that simply sheds light on everything you've seen up until that point in one fell swoop. Native Australian actor Ryan Kwanten has been really impressive in what little I've seen him in outside of TRUE BLOOD, and here he does an excellent job playing the vulnerable young cop and concerned soon-to-be father. Also, being a massive fan of the MAD MAX trilogy, it was great to see Steve Bisley in something recent. Bisley is excellent as the stubborn old cop, and he has an absolutely dominating presence whenever he's on screen. Overall, an outstanding film that I can confidently recommend to fans of Westerns (both modern and classic) and fans of those certain types of films that revolve around small towns that harbor dark secrets.