Picked by Richard of DM

SHINJUKU TRIAD SOCIETY could potentially be a problem for anyone whose knowledge of Asian culture ranges from non-existent to moderate. You see, it takes place in Japan, but there are both Japanese and Chinese characters in the film, and their respective languages are spoken throughout. The fact that the word "Triad" is in the title could lead one to believe that this is a Hong Kong production, but a quick look a the cast and crew reveals that it's indeed a Japanese production. Whether or not the Triad (basically the Chinese equivalent of the mafia) have ever been prominent in Japan, I have no idea, as neither Asian culture nor organized crime are my fields of expertise. Whatever the case, both the Triad and the Yakuza are featured in the film as opposing entities, which one would expect, but yet SHINJUKU TRIAD SOCIETY isn't necessarily about organized crime so much as it's a character-driven film that just so happens to take place amidst some nasty and utterly bizarre criminal activity. 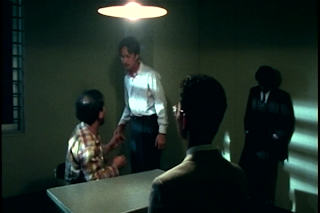 A renegade cop named Kiriya is tasked with solving a brutal execution-style murder, leading him to a Triad made up of homosexuals and led by the eccentric Wang Zhi-Ming, who's a bit of an exhibitionist and is usually accompanied by a young male prostitute at all times. While attempting to crack the case, which he does fairly easily since it's not what the film revolves around, Kiriya discovers that his younger brother is working as an attorney for the Triad. Needless to say, Kiriya's involvement in the case becomes personal and he gets himself in some deep shit with a variety of criminals when he oversteps his boundaries.

I'm sure most of you reading this are probably somewhat familiar with director Takashi Miike. In the event that his name doesn't sound familiar, I'm sure you've at least seen AUDITION, which is his most well-known film amongst the average horror fan. While I'm personally not very up-to-date on his filmography, I've seen enough of Miike's films to know that he's one of the more interesting Japanese directors of genre cinema working today. My gateway Miike film was AUDITION, which I saw about seven years ago. Since then, I've had a love-hate relationship with the director, but I purposely avoid his films for the most part because of his inconsistency when it comes to delivering the goods. Miike is a very prolific director who seems to go back and forth between accessible films and bizarre genre films that feature a strange blend of awkward perversity and extreme violence, and apparently SHINJUKU TRIAD SOCIETY is one of Miike's earliest examples of the latter. 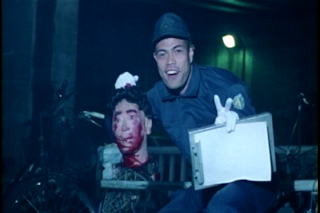 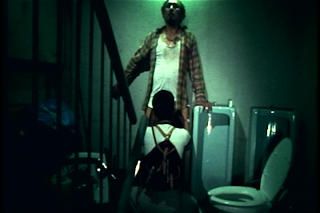 You know right from the jump that this isn't gonna be your typical crime movie when, during the fast-paced opening sequence, a crime scene photographer tells a cop to say "Cheese!", at which point the cop responds without hesitation by holding up a severed head and posing for the camera. Within the next couple of minutes, the film cuts to the back hallways of a nightclub where a young male prostitute is performing oral sex and a client. Though "unconventional" to say the least, the opening of the film is strong and does a great job of setting the tone and letting you know what sort of shenanigans are in store. Rapid-fire editing and jarring imagery over a dancehall reggae soundtrack. Once the film gets moving and the seeds are planted, Miike comes at you full force with as much weird scenarios as he sees appropriate. The highlight of the film's many WTF moments involve a criminal getting ass-raped during an interrogation. Yes, the cops in this movie are so dirty they will ass-fuck information out of you.

The problem, though, as I mentioned earlier, is that it's somewhat hard to follow in terms of keeping track of the characters, keeping track of the gangs, and trying to figure out exactly where certain scenes in the film were taking place. This could simply be due to the fact that I'm apparently a racist who thinks all Asian people look the same, or maybe I was just distracted by other things during crucial moments of the film. Whatever the case, I found it quite easy to tune out and not give a shit about what was going on in the film, especially during the middle section of the film when the pace slowed down considerably. But then something weird would usually happen and suck me right back into the film, leaving me feeling dirty and wanting desperately to take a shower. 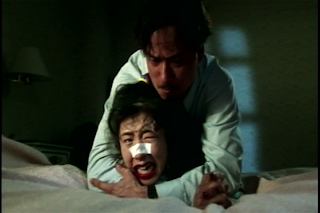 While I'm typically not a fan of Miike's more absurd films, I've found pretty much all of them to be tolerable and entertaining for at least a single viewing, mainly because of how unpredictable they are. SHINJUKU TRIAD SOCIETY is no exception, as it delivers a fairly compelling story and balances it nicely with moments of the aforementioned sex and violence. It should also be said that this is the first in a trilogy of "Black Society" films that are loosely tied together.