Matthew Stolarz is the vocalist and bass player of L.A.-based indie rock band The Active Set. I first came across The Active Set last year when someone e-mailed me and asked me to post their "Famous for Dying" video on my blog - a gory video which sees them getting torn to pieces by zombies. I've been following them ever since, and you should too by clicking on any of the links below. Their latest album "11" is available on iTunes and Amazon. 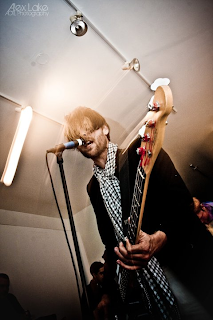 "With a healthy nod to '80s post-punk and new wave, the Active Set offer a high-energy dose of indie, intelligent and upbeat. They love quirky, driven melodies with smart hooks. Then they like to change their minds, and change it up."

1. Who are you and where are you from?
We're the Active Set from Los Angeles, CA.

2. Where might people know you from?
We've been around for 4+ years, so it's likely you've read a blog post about us, seen us live, etc. We toured with Neon Trees in May, and that brought us a lot of new fans and exposure.

3. When it comes to what you do, who or what are your major influences?
Guitar interplay, great melodies, songs that make you excited as well as make you think.

4. What four peoples' faces would you put on your own personal Mt. Rushmore?
Four of the same face: 'Bad' era Michael Jackson.

6. What are the last movies you saw in theaters and on DVD/Blu-Ray?
My brothers made me watch Thor, Iron Man 1 and 2 and Captain America so we could see The Avengers in the theater. 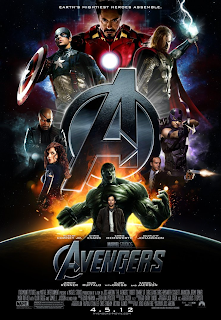 7. What's the last podcast you listened to?
It's been years, so I don't recall.

8. What's the last video game you played?
One of the Grand Theft Auto games, don't recall which one. It was my first time playing one.

10. What are your favorite sports teams? 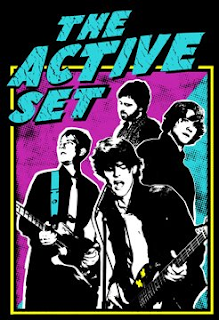 Not a super sports enthusiast, but I like watching soccer mostly.

11. What cartoon or comic book character can you relate to the most?
Spidey's always been my boy, because he's such a 'regular guy'.

12. Create a playlist of ten songs that give people an idea of your musical taste.
XTC - Respectable Street
Angelo Badalamenti - Twin Peaks Theme
Chairlift - Amanaemonesia
Bloc Party - The Prayer
Hot Hot Heat - Island Of The Honest Man
They Might Be Giants - Till My Head Falls Off
Bob Dylan - Girl From North Country
Elvis Costello - This Is Hell
Brian Eno - Burning Airlines Give You So Much More
The Clash - Straight To Hell

13. If you could spend the day at an amusement park with one person from the entertainment industry, who would it be and why?
I'd love to go on all the slow rides with David Bowie, and just hear stories stories stories.