It seems that Marilyn Manson was the last of a dying breed, in that there aren't any Heavy Metal bands and musicians these days that unintentionally stir up controversy just for the mere fact that they exist and that parents are scared of them. The 80's was a big time for Heavy Metal hate (and we can't forget Gangsta Rap either), as bands like Judas Priest and even AC/DC (really?) were accused of inspiring people to commit heinous crimes with their lyrics. And then of course there was Tipper Gore, who, in a way, was the most recognizable symbol of parents everywhere who were scared of rock n' roll and would do anything they could to ban certain types of music, or at least shelter their children from what they perceived as "the devil's music". Most of the time - if not all - it was a case of parents failing to live up to their responsibilities as such and putting the blame on musicians. Well, what if those parents were right? What if Heavy Metal really was the devil's music and that lyrics were powerful enough to literally brainwash teens? Ladies and gentlemen, meet Black Roses. 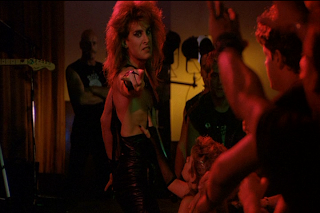 Black Roses are a Metal band who infiltrate the small town of Mill Basin, where they're booked for a run of shows at a high school. According to their frontman and posterboy (literally), Damian, the band - a studio project, essentially - wanted to play some shows in a small town as a way of building some chemistry as a live band before heading out on a major city tour. This is a dream come true for the bored teens of Mill Basin considering a concert's never been held there before, but the parents, naturally, are in an uproar and get together with faculty members of the school to get the performances shut down. During the first Black Roses show, various parents and teachers are present and watching from the back row, but when they see the band members come out dressed in white and playing a song that reeks of positivity (but can still be interpreted as evil if you pay close attention to the lyrics), they figure that maybe they'd unfairly passed judgment on the band and end up leaving the teens unattended for the rest of the show.

The scene mentioned above is great, because even before you know anything about the band, you can tell they're full of shit and are simply putting on a show for the parents. In fact, this scene of the first Black Roses show is a highlight for me, if anything for the sinister look on Damian's face as the parents are leaving, and how the camera keeps cutting back and forth between his face and the door to the gymnasium slowly closing. Once the door closes, the lights go out, and when they turn back on a second later, the band members are dressed in black, the tone of the music has changed, and Damian is rocking a leopard print speedo over his leather pants. 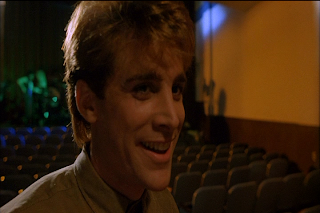 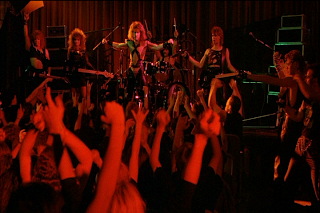 Long story short, with each show that the Black Roses play, the teenagers (old-ass teenagers played by twenty-somethings mind you) become progressively more rebellious and violent (and way sluttier in the cases of the girls), and in some cases even resorting to committing murder. They're obviously not themselves, and it soon becomes apparent that the Black Roses' music has brainwashed them into becoming footsoldiers for Satan. 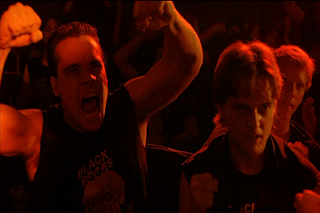 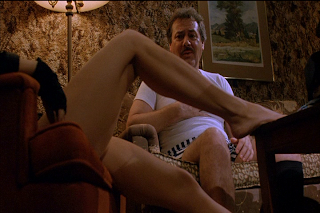 Being a Heavy Metal Horror enthusiast, I'm surprised it took me so long to get around to seeing BLACK ROSES. It wasn't until a few years ago when researching the sub-genre that I learned about it; for some reason it never crossed my path back in the day on home video or television, possibly due to how obscure it may have been at the time. On top of that, I'd heard a lot of great things about it, so my expectations for the movie were about as high as they should be (in other words, not expecting something life-changing, but a top-notch Heavy Metal Horror movie full of amazing 80's fashion and fun Hair Metal music). And, oh wait: there's more! It's directed by the same guy who made ROCK N' ROLL NIGHTMARE, which I honestly didn't even know until I put the movie on.

So, did BLACK ROSES live up to its reputation? Yes and no. It ended up playing out exactly like I expected it to, but it won't go on a list of favorites anytime soon - be it for great "bad movies", Heavy Metal horror favorites (well, maybe, but it won't be at the top of the list), so on and so forth. I liked certain things about BLACK ROSES, but there was a major problem that kept me from loving it, and that was the lack of actual Black Roses. No, not the flowers, but the band. They turn up when they need to be in the film, but I would have loved it if the band were more of a focus, or at least shoe-horned into the plot a bit more somehow. As it is, one of the teachers of the high school is the lead character, along with a female student who he's rumored to be having an affair with, and there are little plot threads and side-stories involving some of the lesser teenagers and even the adults. The band are more or less a catalyst for Mill Basin being turned inside out. And, on top of that, I found their music to be pretty generic and not very catchy in terms of 80's Hair Metal. To be fair, director John Fasano stated on the commentary track that he had to trim the movie down by like twenty minutes, so I'm wondering A) if that's why the band isn't featured as prominently as they should be, and B) where the fuck the extra footage is because I would love to see it.

As for the positives of BLACK ROSES, for one, it's so fucking 80's, which is always a plus with me. It just reeks of mid to late 80's in so many ways. Leather, big hair, fingerless gloves, and lots of denim jackets. There's also some great gratuitous nudity, including a scene where some chick is just standing in front of a mirror and massaging her breasts for no apparent reason. Also, I have to say, some of the makeup effects and puppets were pretty cool; not amazing by any means, but the fact that people put a lot of effort into creating some interesting effects for the film is something to applaud. Speaking of which, another great thing is that you don't even have to wait long to see some of these makeup effects, but I won't spoil the film's bizarre opening sequence for anyone who hasn't seen this yet. I also dug Sal Viviano as Damian, but mostly because he looked eerily identical to Christian Bale. Overall, though, kinda boring at times and the heavy-handed Richard Band-esque synth score was pretty distracting for the most part, and of course the disappointing amount of Black Roses screen time. BLACK ROSES is still weird enough to recommend, so give it a shot if you're into 80's horror, and at least it's better than HARD ROCK ZOMBIES.