I normally don't quote any other sources in my reviews, but director Koen Mortier's synopsis of EX DRUMMER is too good to not use, and of course who better to synopsize a film than the person who made it:

"Every village has its band of fools, trying to get to the top, following their idols in drug habits, but staying losers till the end of their pathetic days. They all do this in the name of rock & roll. Three disabled rock musicians are looking for a drummer. Dries, a well known writer, seems the right guy for the job, were it not for the fact that his only handicap is that he can't play the drums. He joins the group as a perfect, but evil god walking down his mountain to play with the populace. With the arrival of this infiltrator, personal disputes and family feuds start to jeopardize the band's fragile future. Dries will manipulate them till they are willing to drink each others blood and their only future is written down in many Punk lyrics: 'No Future'." 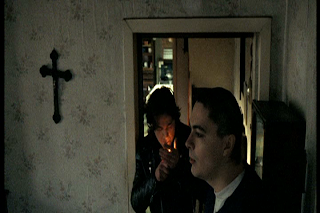 That pretty much sums up EX DRUMMER as far as what little there is of a plot. Three musicians who are basically the scum of society and claim to be handicapped (one has a lisp, another is gay and has a gimp arm, and another is almost deaf) seek out a drummer for their band, which is where lead character Dries comes into the picture. Dries is a well-known writer with no drumming experience whatsoever, but for whatever reason the band members go out of their way to track him down and ask him to join the band. He accepts the position and names the band The Feminists. Dries sees the opportunity as a means to perform an experiment of sorts, in which he initially assumes the role of a babysitter who gets them to where they need to be (a Battle of the Bands type of showcase), only to become the person who dismantles them in more ways than one. 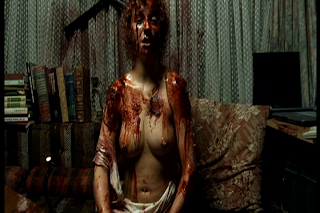 Going into EX DRUMMER, I expected something odd, violent, and a bit on the artsier side because of what I'd heard about it from various sources, but it ended up surpassing my expectations in a lot of ways, which isn't necessarily a good thing or a bad thing. In terms of the filmmaking, EX DRUMMER is something else. It constantly breaks the fourth wall - not in the sense that there are characters who address the audience (well, there's that too), but in ways that it reminds you that it's a film and contradicts the raw, documentary-style aesthetic of it. EX DRUMMER has the nihilism (and disorienting camera work) of a Gaspar Noe film, the exploitation of humanity that you'd see in a Harmony Korine film, and the mind-bending stylistic flourishes of a Spike Jonze or Michele Gondry film. For example, two characters exchange dialogue while inside of a woman's vagina, and the band's vocalist, Koen, is usually filmed upside down whenever there's a scene that takes place in his filth-soaked apartment. 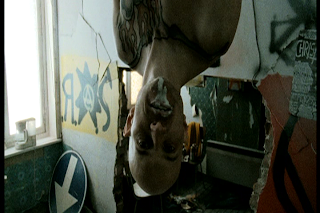 So yeah, not much of a plot in this one. It's character-driven, but the problem with that is there isn't a single likable character in the film, and only a few are genuinely interesting. I also found EX DRUMMER to be very pretentious and not as cool as it was trying to be, content-wise anyway. But, I dig the shit out of the bizarre style of filmmaking and the creativity of the overall presentation of the film. The visuals are absolutely top notch in my opinion, and the soundtrack is pretty amazing. Mogwai and ISIS are probably the more noteworthy bands with music featured in the film, but aside from that you have everything from indie rock to loud and abrasive punk rock, including Millionaire - a band fronted by early Eagles of Death Metal guitarist Tim Vanhamel and the band who actually provided the music for the fictional Feminists. For me, the band showcase towards the end of the film was a real highlight; the music is great, and the live performances are brilliantly shot and edited to create the genuine and chaotic feel of a punk rock show. 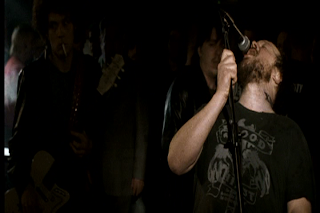 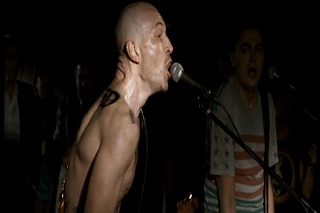 EX DRUMMER is a bit frustrating at times because of the lack of anything really happening other than scenes of group members arguing and yelling obscenities at each other, or Dries carrying himself with a God complex. During the nothingness, we do get a few memorable, weird, or darkly humorous moments, like the backwards opening credits sequence, The Feminists rehearsing a cover of Devo's "Mongoloid", or a meeting in a trailer home between Dries and the frontman of a rival band over who gets to perform a song called "Deep Fish" (both bands coincidentally have a song with the same title). Despite not getting much enjoyment out of it and not seeing what the point of the film was, I was too impressed by the filmmaking and the atmosphere to simply write it off as a "meh". EX DRUMMER is unique in spite of its many similarities to the films of the directors I mentioned earlier, and it's an interesting ride to say the least.