When it comes to punk rock, people have often argued as to where it was started and by whom. It's debatable, but I think it's safe to say that the the garishness of the punk style (multi-colored hair, mohawks, unconventional make-up application, and a form of anti-fashion that ironically became a trend) originated in the UK with the Sex Pistols, who, at the time, were reacting to the social and political climate of their home country and expressed themselves through an extreme form of music. JUBILEE came shortly after the formation of the Sex Pistols and the beginning of their version of the punk movement, so there's still a bit of anger, agenda, and anarchy underneath the film's loud punk aesthetic.

When the film opens it's presented as a period piece, with Queen Elizabeth and her entourage being visited by an angel named Ariel, who takes them on a journey into the England of the future so they can see what has become of their country. What they find is an almost post-apocalyptic and poverty-stricken version of England, where groups of young people exist outside the confines of the government and comment on war, currency, and laws as if they were an alien concept. The specific group that serves as the focus of the film are a very Warhol-esque collection of social oddities who teeter between free-loving drug-chic hipsters and rainbow-colored gutter punks who can't seem to decide whether they want to start a revolution or become rock stars. 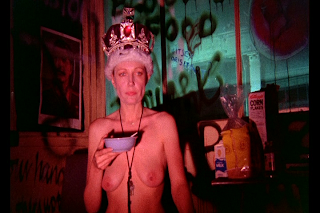 Among the central group of punks are Amyl Nitrate (a former ballet dancer), Mad (a bull-dykish pyromaniac with a bad temper and an orange buzzcut), Chaos (an androgynous Goth who rarely speaks), Sphinx and Angel (incestuous boy-candy brothers), Crabs (an actress who's "between jobs" and prefers to wear as little clothing as possible at any given time), and Bod (the matriarch and leader of the group). The characters are just as colorful and wild as you'd expect, and they're certainly one of the more memorable things about this strange film. The people who play them are also interesting, in that you have a mixture of actors and non-actors who were plucked out of England's thriving punk scene. 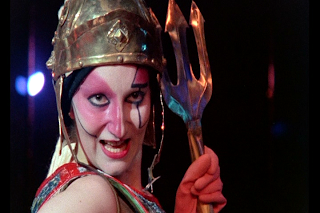 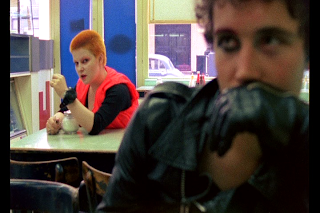 Jordan (Amyl Nitrate) is regarded as a pioneer of punk as a style and fashion trend. Toyah Wilcox (Mad) went on to be somewhat of a New Wave icon. Little Nell (Crabs) was immortalized a few years earlier as Columbia in ROCKY HORROR PICTURE SHOW. Another noteworthy casting choice is Adam Ant, who made his debut here as an aspiring musician who became an overnight success in the plot thread of the film that makes a blatant commentary on the music industry - a commentary that is probably even more relevant today than it was back then. Also appearing in the film is legendary transsexual Jayne County, who's quite entertaining in the little amount of time she's on screen as "Lounge Lizard". 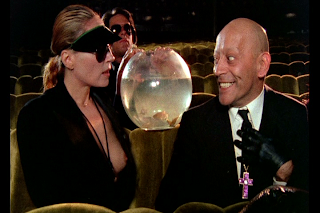 Jack Birkett, a flamboyant homosexual and blind actor who usually went by the stage name "Orlando", plays a character in the film named Borgia, who's an entertainment mogul and the film's satiric symbol of the music industry, and it's through him and Adam Ant's character that JUBILEE goes beyond punk as an aesthetic and subculture addresses the music business and how artists are disposable, which is a contradictory "punk" statement. Music-wise, we also get a cool soundtrack with songs from both Adam Ant and Jayne County, as well as a personal favorite Siouxsie and the Banshees, who were supposed to appear in the film but pulled out for whatever reason. There's a funny moment during the audition scene of Adam Ant's character where the neck of his guitarist's instrument gets tangled in Adam's jacket, and so the guitarist awkwardly follows him around for the duration of the song while trying to get it untangled. 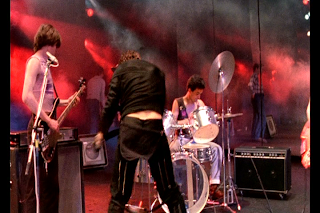 JUBILEE is a lot of things but it's an art film first and foremost. It's not so much a celebration of the punk subculture or punk music, or a film that tries to present an intriguing narrative, as it is an art film with a punk theme and message. It's a very odd and somewhat inaccessible film that has tendencies to be a bit pretentious at times, but pointing that out is a bit obvious considering JUBILEE is an art film after all. While I loved the gorgeous look of the film and the vibrant neon color scheme, I had a hard time getting into the movie itself, and by the time it was over it had almost completely lost me. A name that I brought up earlier was Andy Warhol, and he's the one person or thing that came to mind the most when watching this; not the Sex Pistols (who seemed to be a big influence on the film for obvious reasons) or the punk subculture in general, and I'm obviously far too detached from England and the country's history and political climate for me to relate to the commentary.