HINNON VALLEY is a zombie movie of the "virus" variety, and it starts out just as a massive outbreak is in its early stages and ordinary humans are being reduced to mindless flesh-eaters. A young girl named Erin finds herself suddenly orphaned in a cemetery when her parents are torn to shreds by zombies, but luckily she has a savior in the form of Allison - a female Special Ops type of badass armed with a machine gun. Allison rescues Erin, blasts some zombies, and takes her out of harm's way for the time being. Military types scramble to find a solution to the potential zombie apocalypse while our two female leads bond while seeking shelter and tag-teaming the infected. Speaking of which, one of the very few things I like about zombie movies is that they give filmmakers an excuse to kill children (and in some cases, babies!), and child-murdering is something that happens in HINNON VALLEY on more than one occasion. 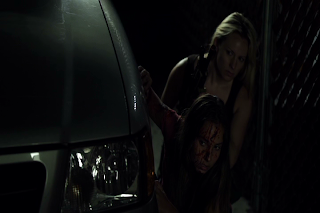 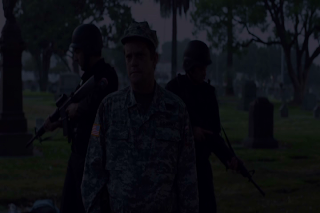 A few things immediately came to mind once the characters were introduced and things were set into motion (which didn't take long considering the movie's only twenty-eight minutes). First, it's really dark; not thematically per se, but visually. It was incredibly hard to get a good screenshot, or at least one that resembled more than just people or zombies surrounded by complete darkness. Granted it's not gonna look like the Las Vegas strip during a zombie apocalypse, but damn. Atmosphere is one thing, but not being able to see shit is another. If director Richard Greenwood Jr. chooses to make this a feature-length (which I hope he does), perhaps it would be wise if he invested in some lights or at least got a little creative with minimal lighting (THE DESCENT takes place in a cave and BURIED takes place in a casket, and both feature stellar examples of creative and believable lighting techniques). 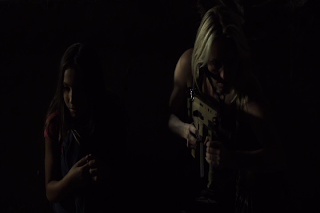 The other thing I noticed was that there was a bit of a WALKING DEAD vibe to the movie, in that you have these normal people suddenly thrust into a zombie end-of-days scenario. I don't typically seek out movies from the zombie or survival-horror genres, but to me they generally work just as long as the characters aren't irritating. Luckily the two protagonists in HINNON VALLEY (Allison and Erin) are easy to pull for; they don't give you any reason to dislike them, and you genuinely enjoy watching them once a relationship is established between the two - or at least it was the case with me anyway. 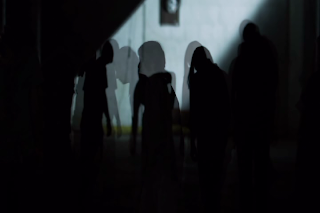 Something else of note (and, again, I purposely choose not to watch a lot of zombie movies, so perhaps it's a normal thing) is that throughout most of the movie neither Allison nor Erin make any attempt to wipe blood from their faces. They just walk around covered in the blood of whatever zombies they just slaughtered, and not only that but the blood is dangerously close to their mouths and it's actually been on their faces long enough to dry. Considering they're obviously in the midst of a pandemic, you'd think they'd be a little more sanitary, but I suppose it adds to the visual effect. Plus, an attractive blonde woman such as actress Alexis Zibolis covered in blood is kinda sexy.

One of the things that I liked about HINNON VALLEY (and one of the reasons I wouldn't mind seeing a feature-length) is that there's a back-story in regards to one of the characters that's never really touched on too much. Greenwood Jr. gives you enough information about said character to add some depth to this person, but he leaves out enough so that you could potentially become interested. I'm sure the short running time also played a factor in the limited amount of character development and exposition, but it works. Also, kudos to Greenwood Jr. for getting some great production value with a few of the locations, including an underground tunnel area and what appeared to be an abandoned warehouse. 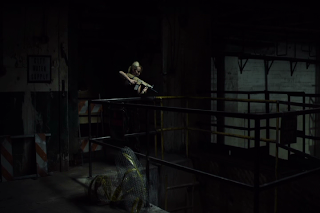 Whether you like this movie or not, you can't deny that Greenwood Jr. knows how to end a movie. There isn't some big set-piece or a scene in which some characters go out in a blaze of glory, but rather a simple formula that not enough horror filmmakers utilize, and that formula would be: suddenly cut to black (sorry, I don't know what the "industry term" for that is) and instantly cue a rock song of some sort. Pretty easy, right? Bonus points if you throw in something self-referential, or show something unexpected prior to cutting to black. The MY BLOODY VALENTINE remake. Dude breaks the fourth wall and looks at the camera. Cut to black, rock song. CHRISTINE (SPOILER ALERT). Possessed car shows signs of life after being crushed. Cut to black, "Bad to the Bone". Greenwood Jr. not only knows how to end a movie, but he even throws in a DAY OF THE DEAD reference.

Overall, I quite enjoyed HINNON VALLEY and will definitely be on the lookout for anything that Richard Greenwood Jr. wants to throw at us. Not a game-changing zombie movie by any means, but fun, economical, splendidly gruesome when it needs to be, and a nice teaser for something that's hopefully to come (or something that could have been).