When horror fans hear the words "body horror", the first person that comes to mind is David Cronenberg, which is understandable since Cronenberg is indeed the Master of Body Horror and the man who put the sub-genre on the map. It's a theme he adopted and ran with for a good portion of his career. Reviewing two Cronenberg movies for a Body Horror Double Feature would be too obvious, though, so I went with two movies from other directors that are solid examples of the sub-genre, one of which is considered a horror classic, and the other is arguably one of the better non-mainstream horror movies to have come out in the last ten years. Both films also share the theme of being confined, for the most part, to a single location as the protagonists in each film are more or less assaulted by "alien" parasites that do awful things to the human body.

First up is SPLINTER, which came out a few years ago and is a pretty minimalist horror movie that I can't imagine was made for very much money. And for me to say that it appears to have been cheaply-made is not a knock against the film in any way; it's a quality horror movie that looks great and has some awesome practical effects, but it's a very basic film in terms of characters, setting, and plot.

Prior to the central characters being introduced, it's established that there's some sort of body-destroying parasite that seems to be confined to a small area of a rural town for the time being, and it's being carried by a rabid dog who attacks a gas station attendant and presumably passes on said parasite, which looks like a bunch of splinters covered in oil. From there, we meet a happy young couple on a camping trip, Polly (Jill Wagner) and Seth (Paulo Costanzo). The pathetic boyfriend clearly hates the outdoors and uses whatever excuses he can come up with for he and his girlfriend to get a motel room instead of roughing it in a tent. She eventually obliges, but as they hit the road, they're car-jacked and held at gunpoint by another young - albeit more redneckish - couple, Dennis (Shea Whigham) and Lacey (Rachel Kerbs). 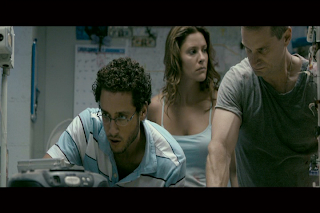 The two couples end up at the same gas station from earlier, and it's not long before one of them is attacked by the gas station attendant, who's now deformed and mutated with the aforementioned splinters protruding from his body. He kinda looks like the Brundle Fly, except, instead of a fly, if someone was genetically bonded with a sea urchin instead. The characters then book it into the gas station's convenient store and lock themselves in to keep from being attacked by this splintery zombie thing. Without giving too much away, I'll just say that the creature in the film has the ability to fuse its body to other victims to form a rather impressive-looking Voltron of flailing broken limbs that are twisted into unnatural-looking positions. And, with one of the main characters getting a laceration from one of the titular splinters earlier, the question remains as to how this character will be affected by the parasite and whether or not the others will be able to escape with their lives. 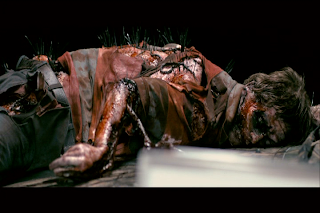 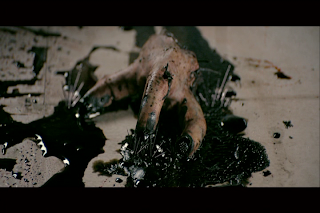 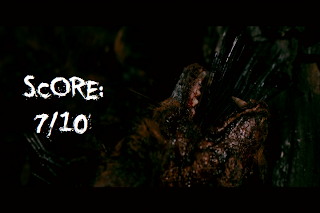 I first saw SPLINTER a few years ago when it came out and was very impressed with it for a number of reasons. Watching it now, though, it doesn't hold up as well as I would've hoped, but it's still a solid minimalist horror movie and I wish there were more films out there just like it. SPLINTER does a good job of grabbing your attention and getting your blood pumping right away. It starts out with some splattery stuff and doesn't waste much time showing you the goods in terms of the impressive special effects. There's also the fact that the filmmakers are taking something simple like a parasite or a virus but presenting it in a completely unique way; with the lack of an explanation in regards to the "splinters" and their origin, all bets are off and expectations are thrown out the window. So there's that, but the film eventually ends up turning into the characters doing some MACGYVER shit as they try to figure out how to either: A) kill whatever's terrorizing them, or B) distract it long enough to escape. That's all fine, but it isn't very exciting to watch. Aside from that small complaint, SPLINTER is a cool little horror movie with some outstanding practical effects that sort of reminded me of this movie...

John Carpenter's THE THING is a movie that I've purposely avoided talking about on a public forum until now. It's universally loved by horror fans, and I feel like I would be criticized if I called it anything less than a masterpiece, but now I'm at the point where I don't really give a shit what anyone thinks. It's also one of those movies that's kind of pointless to talk about anymore because everyone's seen it and it's been widely covered on pretty much every horror website or reference book by people who know much more about movies than I do 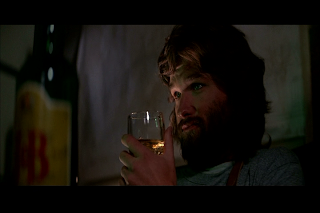 THE THING is the first in what John Carpenter calls his "Apocalypse Trilogy", and it was also produced in the middle of one of the most impressive runs by any director in the history of cinema. EVER. If you don't know what I'm talking about, just hit up Carpenter's IMDB page and look at the list of amazing films he made in a span of about five years starting with HALLOWEEN. THE THING takes place in Antarctica and revolves around an all-male group of scientific researchers with impressive beards who discover a frozen alien corpse. They also take in a stray dog that belonged to Norwegian researchers who were stationed at another base. Unbeknownst to them, the dog is carrying a gnarly alien parasite that eventually forces itself out of the dog in a gruesome spectacle and proceeds to terrorize the members of the research team. 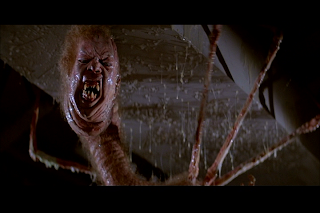 The manliest scientists ever make a series of disturbing discoveries throughout the film as they attempt to make sense of the craziness involving the dog, the alien corpse, and the team of Norwegians, who seemingly went crazy and died for whatever reason. They soon realize that this alien parasite that the dog was carrying can not only grow and manifest into a physical creature, but it has the ability to take over anyone's body and go unnoticed as it blends in with everyone else. Paranoia ensues, accusations are thrown in different directions, and no one knows who to trust. Everyone turns on each other as Kurt Russell's character basically assumes the leadership role and tries to maintain order. Even if you've seen this movie a hundred times and know who's in the clear and who's not, it always works because of the script and how well the ensemble cast carries the material. 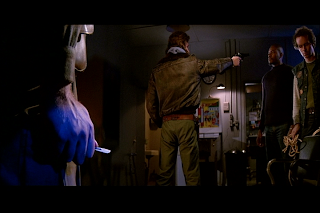 Earlier I sort of alluded to possibly not being a fan of this movie, but that's not the case. I have always been a fan of THE THING, but I don't worship it as much as other horror fans out there. It's not my favorite John Carpenter movie, but a lot of that has to do with how consistent Carpenter was in putting out great films in the late 70's to the mid 80's. He has so many great movies to choose from, and it's simply a matter of preference for me. Also, I think a lot of the love that people have for this movie is part of what turns me off about it. In most cases, when something is universally embraced, I'll try to find a reason to not like it, but never for the sake of being argumentative or contrary. That's just how I am. That being said, THE THING is a beast of a film and one that I grow to appreciate more and more with each viewing.

Like most people who are fans, what makes THE THING a special horror movie for me is the spectacle of Rob Bottin's awesome practical effects. What's great about THE THING is that there isn't just one big reveal in terms of the special effects. There are constant displays of practical effects throughout the entire movie, and there's a perfect balance of storytelling, character interactions, and horror set-pieces. THE THING is like a cinematic museum of grotesque creatures and the ensemble cast are your guides who make sure you get to wherever you need to be. Tentacles, slime, twisted limbs, disembodied heads that turn into spiders, and giant mouths that protrude from unnatural places barely scratches the surface of the many surprises that this film has in store. As much as people lament over how CGI has become so prevalent in filmmaking, at least we'll always have movies like THE THING to go back to and marvel at. 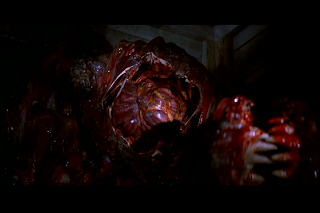 As usual, cinematographer Dean Cundey brings it. Cundey and Carpenter are one of those magical DOP/director tag teams that always worked well together and perfectly complimented each other. In THE THING, Cundey uses some terrific blue lighting to highlight the snow, and occasionally some red is thrown into the mix to contrast the blues when the characters use flares during the nighttime scenes. A movie that takes place in Antarctica really has no business looking gorgeous, but yet this one does, and never in a way that doesn't seem too unnatural or distracting. As far as the music, it's one of the few early Carpenter movies that isn't scored by the director himself. Instead, he brought in one of the greats, Ennio Morricone, to do the music, and the result is a cross between a more "classic" sounding horror soundtrack and the ominous electronic music that Carpenter's films are known for. 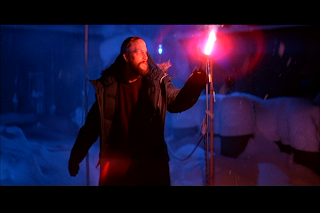 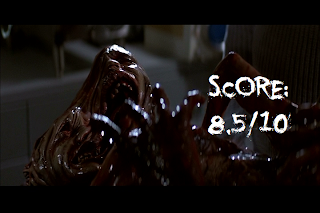 All of that being said, there isn't much that THE THING doesn't do right. We have some of the best - if not the best - special effects in the history of horror movies, some top notch visuals, a great score, and a metaphor for the AIDS epidemic to boot, which was a huge deal at the time. For the sake of not turning this into an essay on THE THING, I'll just say that the ensemble cast is great as well, and the all-male cast is definitely a product of the time and not something that would be likely to happen in a mainstream movie today, as evidenced by the 2011 pre-make of THE THING, where Kurt Russell's character was essentially split up into a role played by two actors: Joel Edgerton and Mary Elizabeth Winstead. Speaking of which, THE THING is further proof that Kurt Russell is one of the coolest leading men to have ever graced the screen, but the rest of the cast is great and each person contributes something special and unique. And, as strange as it is to see Diabeatus spokesperson Wilford Brimley without facial hair, him destroying a room with an ax is one of the film's highlights.