I was a little late to the game on this one. DON'T BE AFRAID OF THE DARK is regarded as one of the great made-for-TV movies, but I have no memories of watching it as a kid, and it wasn't until last year that I finally caught up with it. I was fortunate enough to have grown up during a time when cool made-for-TV movies were a thing. There are still tons of movies produced for television, but it's rare for one to be showcased on one of the major networks. Don't get me wrong, this is not me being an old fart and lamenting about how "they don't make movies like they used to"; I'm simply stating the truth. Television and films have evolved, and I'm sure the children of today will look back thirty years from now in wonderment of what it used to be like. When my illegitimate child starts his own blog many years from now, do you think he'll be writing about DINOSHARK in the same way that a lot of current bloggers write about movies like GARGOYLES and THE NIGHT STALKER? Probably. That said, DON'T BE AFRAID OF THE DARK is a very special film, and it's indeed something I watch in absolute amazement at the fact that it once aired on national television.

DON'T BE AFRAID OF THE DARK, which was remade last year by producer Guillermo del Toro and is already buried at the bottom of Wal Mart cheap bins, mainly revolves around a woman named Sally who moves into a new home with her husband. Well, it's not a "new home" per se, but it's new to them, and Sally realizes just how much of a history the home has once she settles in and makes some rather strange observations. For example: a fireplace in the basement that's completely bricked up and sealed. When she asks the home's caretaker about the fireplace, he gets all weird and simply advises that it be left alone. Sally, of course, doesn't listen (we wouldn't have a movie if she did) and decides to essentially break the seal on the fireplace. As a result, she unleashes little creatures who initially make their presence known by lurking in the shadows and whispering to each other about disturbing things in the night. 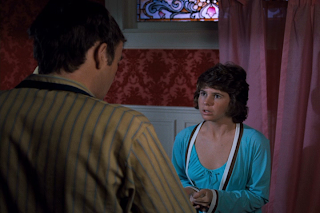 The creatures gradually reveal themselves, and only Sally can see or hear them. There's a reason for this, and it has to do with the fact that the creatures want to claim Sally and bring her back to their abyss - their darkness beneath the fireplace - so she can remain with them for the rest of eternity. Yeah, this aired on national fucking television, so I can only image the number of disturbed children who were exposed to this movie back in the day. But, that's one of the reasons why I love it. 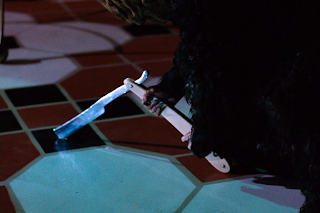 Throughout the film there's an increasing amount of paranoia on Sally's part for obvious reasons. She's never quite driven to the point of madness in the literal sense, but she becomes an emotional wreck as the movie progresses, especially since her asshole husband pulls a guilt trip on her and makes her feel like she's insane when she describes what's been happening in the house once the lights go out. At the same time, I can't really blame her husband. Not only does Sally have an awful haircut, but she's kind of an idiot. However, just because I can understand Sally's husband's logic (to an extent), doesn't mean I necessarily side with him. Rather than simply contrasting Sally, the old-fashioned, hard-working atomic age husband basically comes across as an antagonist by comparison 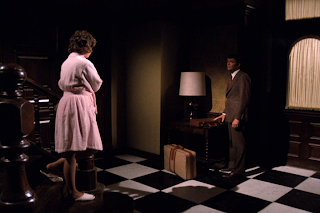 With that out of the way, let's get to the creatures. There are way too many things to talk about as far as why I like the creatures in this movie. First of all, I love their look. By today's standards (and, arguably, even by 1973 standards) they look kinda silly and probably wouldn't come across as scary to most people. They resemble miniature apes with peanut heads. The costumes are about as low rent as it gets (the mouths don't even open on the masks when the creatures speak), but at the same time I think the costumes are so effective and inherently disturbing because of how weird-looking they are. Secondly, I love that the creatures are clever and occasionally rely on teamwork to terrorize Sally throughout the film. Have you ever watched a horror movie and wondered what a monster does when it's waiting in the shadows to pounce on unsuspecting victims? Well, this movie actually SHOWS you. More often than not, when we see the creatures, they're communicating with each other and plotting to take out Sally. They can also make booby traps. For some reason, they also procrastinate a lot. On more than one occasion, they forgo attacking Sally and opt to just scare her instead as they whisper "Tomorrow we'll get her" to each other. Again, silly, but in the context of a movie playing on network television late at night as children could potentially be watching it, quite disturbing. 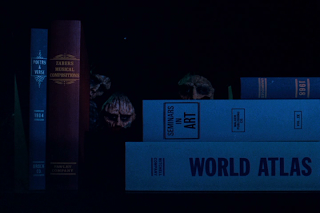 I'm sure DON'T BE AFRAID OF THE DARK didn't look particularly great on small televisions back in the day, which is a shame since it's actually beautifully-filmed in spots. Thanks to it being remastered and released through Warner Archives, we can now see just how gorgeous this movie is. It's not a showy film in terms of fancy camera work, but the lighting and cinematography is fantastic at times. There's a bathroom scene in particular that looks like something out of a Mario Bava movie because of the colors and the lighting. There's some great set design as well. I don't know whether or not they actually filmed this movie in a house or on a set, but, whatever the case, there's a nice balance of muted and bright color schemes depending on whatever mood that the film's trying to evoke. Also impressive are the large props that were built to contrast the dwarf actors in the creature costumes.

If an adult like myself were to watch DON'T BE AFRAID OF THE DARK for the first time in this day and age, I don't think it would necessarily be "scary", but it's still a strange and eerie little film thanks to the theme, the visuals, and the great score. However, there's no denying that it's very dark for a made-for-television movie, especially when you keep the ending in mind. My only major complaint would be that it drags for being a little over seventy minutes in length. For most of you, I'm sure this is just a trip down memory lane, but to those of you who haven't seen it, or to those of you who had a bad taste left in your mouth by the remake (I like the remake, personally) this is one you gotta see.