After quite the drawn-out opening credits sequence that establishes a sudden outbreak of people getting sharp, debilitating headaches, we cut to a bunch of friends at a house party. Aside from the fact that some dude who's apparently taken too much drugs thinks he's a bird, things seem to be going well. Out of nowhere, one of the party-goers goes from being social and completely normal to crazy-eyed and psycho when someone accidentally rips his wig off to reveal a patchy bald head. The reveal is both hilarious and utterly creepy at the same time. Baldy bolts out the door, leaving the rest of the party-goers - including his best friend Jerry (Zalman King) - stunned and party-pooped. Everyone leaves except for three girls, and as the night winds down, Baldy suddenly bursts through the front door and goes ape-shit, leaving two battered young women and a dead one in his wake. He's eventually put down like a crazed animal, but the question still remains as to what caused his sudden psychotic turn. 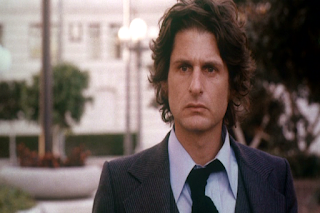 As BLUE SUNSHINE unravels, it's revealed that the doomed party-goer is simply the first of many to fall victim to a strange epidemic. The symptoms: headaches, hair-loss, uncontrollable murderous compulsions. Headaches, hair-loss, and murderous compulsions? Sounds like the Louis C.K.-approved personal Hell I've been living in ever since I turned 29. The difference between me and the people in this movie, though, is that I never dabbled in some wierd brand of LSD called "Blue Sunshine". Yep, the plot thickens. See what happens when you do drugs, kids? When you least expect it, you go bald and you kill people. 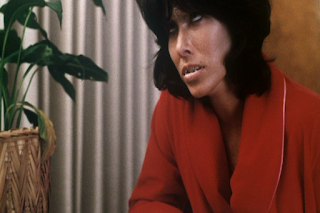 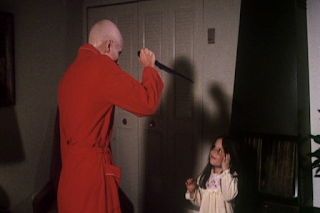 The guy who I mentioned earlier, Jerry, assumes the role of amateur investigator and tries to get to the bottom of the epidemic that claimed his friend's life. May as well since the authorities aren't paying much attention to the bizarre incidents. Naturally, the investigation reveals that the victims of the outbreak are tied together by much more than experimental drug-use, but the pay-offs are fairly underwhelming. Regardless, the journey to the anti-climactic and abrupt conclusion is an interesting (and odd) one. Aside from Jerry going from place to place and making gradual discoveries, a bulk of BLUE SUNSHINE consists of a few key characters succumbing to the mysterious epidemic and subsequently going ape-shit. These moments are effective and surprisingly chilling despite being fairly laughable at times, and they're accompanied by a shockingly good score that sounds like a cross between the music from DEXTER and Manfredini's more stringy arrangements from FRIDAY THE 13TH turned up to eleven. 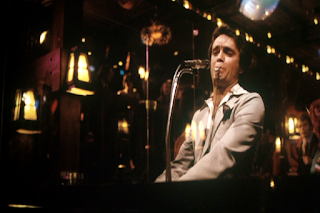 The 94 minutes breezes by and the score, which I already touched on, is pretty amazing. Other highlights include someone going berserk in a disco ("There's a bald maniac in there. He's going bat shit!"), a crazed babysitter attacking little kids with a kitchen knife, and a laughable mantra that our lead character recites every time he handles a dart gun. Speaking of which, Zalman King, who most people probably know for RED SHOE DIARIES, is pretty good in the lead role. While thematically dated (really, who does LSD anymore?) and underwhelming from a storytelling perspective, BLUE SUNSHINE is such a weird film that I can't not recommend it.