It's interesting to see how not only the vision of the future in cinema has changed over the years, but of the post-apocalypse aesthetic as well. Perhaps, as the years go by and there's an evolution of what society fears the most, our view of what's to come is a reflection of that. Post-apocalypse films used to be synonymous with giant shoulder pads, spikes, and costumes made of garbage. Now, post-apocalypse in cinema has become much more bleak, depressing, and colorless a la THE ROAD, STAKE LAND, etc. Instead of dystopian worlds controlled by megacorporations, or warriors who battle to defend what belongs to them, there's nothing. Just survivors. Such is the case with THE DAY, which sees a group of young people, who have apparently lived through something devastating, seeking shelter and living in fear of some sort of threat that exists. 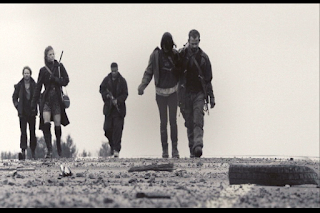 THE DAY doesn't waste a lot of time setting things up. You get the gist of it, and the stakes are raised before you know it. Without getting into specifics and spoiling anything, this is one of those movies where no one is safe. A character that you're invested in could be eliminated at any given moment, which is something that I personally appreciate. Most of the time, you can usually predict the order in which people will die because of the pecking order that's established, but if there's one thing that this movie does well, it's defy the "rules". The characters hole up in what appears to be an abandoned farmhouse after traveling many miles on foot and suffering from starvation. Again, without getting into specifics, THE DAY quickly turns into a survival/siege movie, in which the group of characters we're introduced to (all of whom are armed with their own little signature weapons) do battle with an entity that wants to invade their makeshift base. 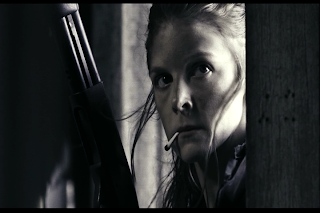 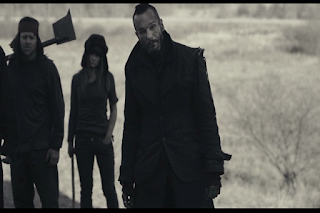 It should be said that the characters aren't your typical horror movie protagonists, in that they're not weak by any means. In fact, they're very organized and tactical, which would obviously be a necessity to survive in whatever conditions that plague the world they exist in. That said, the characters are somewhat impressive. Personally, I also found the cast to be surprising since I pretty much went into this blind and with zero expectations. Amongst the cast are Shawn Ashmore (FROZEN), Shannyn Sossamon, Ashley Bell (THE LAST EXORCISM), and one of the dudes from LORD OF THE RINGS. I love Shannyn Sossamon to death and I've had a crush on her for many years, but she's unfortunately one of the weaker elements of the film. I did enjoy her presence in the film, though, and there's something about her swinging a machete that really turns me on. Ashmore is usually good in whatever I've seen him in, and he's no different here. The standout, though, surprisingly, is Bell. She looks so fucking badass in this movie and her character is intriguing. 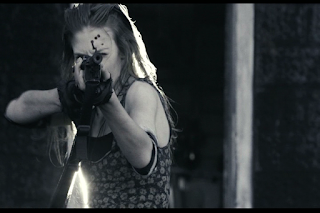 You know you have a good movie on your hands when there are things that happen only 30 minutes in that you have to avoid talking about, which kinda goes back to what I was saying about this movie raising the stakes rather quickly. As a result of things being shaken up so early on, THE DAY keeps you guessing throughout and wondering what will happen next and to who. As the film goes on, though, the twists and turns take a backseat to the action, and it turns into a pretty basic siege movie, but an enjoyable one nonetheless. Some of the violence is surprisingly nasty and cruel (particularly a scene where a female character is repeatedly punched in the face by a man). If there's a weak area to speak of, it would probably be some of the dialogue. Going into it, I wasn't thrilled about the lifeless aesthetic, but it actually works despite the visuals not being the most pleasant to watch. Otherwise, THE DAY is a nice surprise and a quick watch (a little over 80 minutes), with cool characters, axe-swinging galore, and lots of people shooting rifles and shotguns.