This week's 13 Questions guest is an amazing artist who I've known through Facebook for around a year now. Not only is he super talented, but he also has quite the collection of movie memorabilia! You can see some of his art right here in this post and at the link to Rodrigo's site below. 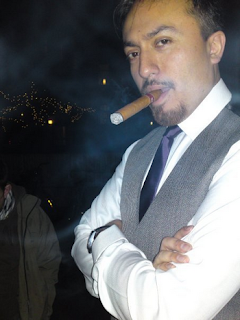 1. Who are you and where are you from?
I was born in Chile but I've been living in Sweden since I was 14.

2. Where might people know you from?
I'm quite locally known: People here in my hometown know me for a couple of things. First of all for my illustrations, I had a bunch of exhibitions and I designed the logos for a couple of bars and coffeeshops. Second: I used to run a local film club that showed exploitation and cult films. It was hard work keeping that thing running since I did everything myself, I booked the films, cut trailers that were shown before the movies and, of course,  drew the posters. I was getting burned out so I'm taking a break from that at the moment. Third: I wrote the screenplay for a couple of short movies, one of which won a bunch of awards and was shown in Swedish national television. 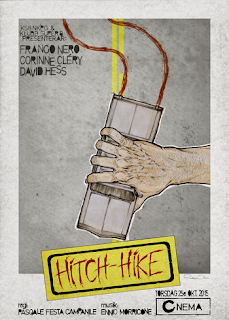 4. What four peoples' faces would you put on your own personal Mt. Rushmore?
Robert Ryan, Lee Marvin, Charles Bronson and Warren Oates.

6. What are the last movies you saw in theaters and on DVD/Blu-Ray?
The last movie I saw in the theaters was, sadly, The Great Gatsby. The last DVD I saw was Tight Spot, a noir starring Edward G.Robinson, Brian Keith and Ginger Rogers.

8. What's the last video game you played?
I'm not a video game fan so the last time I tried to play one was Tomb Raider 3 I think. I don't have the patience to play those things.

9. What's the last book you read?
Murrow: His Life and Times by A.M. Sperber. 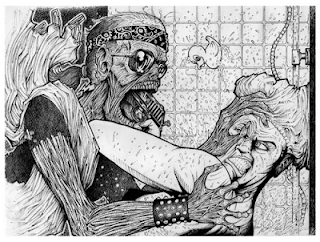 10. What are you favorite sports teams?
I don't care for sports so I don't have any. My father is quite disappointed in this as he is a huge Soccer fan and would love to spend some sports related quality time with his son. Sorry dad.

11. What cartoon or comic book character can you relate to the most?
Daffy Duck 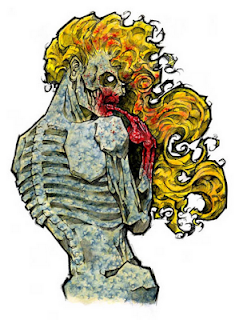 13. If you could spend the day at an amusement park with one person from the entertainment industry, who would it be and why?
Ennio Morricone. I think it would be a disaster as he seems to be quite a cranky old dude, but I wouldn't mind if he chewed me out as long as I got to meet him.