FUTURE KICK is set in a dystopic future where a large number of wealthy humans have moved to the Moon, leaving the scum of society to exist on Earth under the control of megacorporations. Said megacorporations have developed human-like robots known as Cyberons to keep the shitty humans on Earth in check. However, due to what seems like a lack of interest, the Cyberons are eventually phased out and eliminated, which is where lead character Walker comes into play. He was apparently a bad-ass Cyberon who went into hiding and now works as a bounty hunter. His help is eventually sought out by a Moon resident named Nancy, who's cheating-ass husband, while visiting Earth, was killed by shady members of a corporation known as New Body. 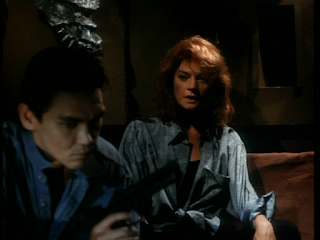 So, FUTURE KICK was sort of a leftover movie I had intended to watch when I went through a Cyberpunk/Sci-Fi phase a month or so ago, and one of the selling points for me was Action star Don "The Dragon" Wilson, whose films are somewhat of a blindspot for me. I recall seeing one or two of his movies back in the day, but he's never been an Action star that I've been particularly fond of. Well, after seeing this movie, I'm still not particularly fond of him, but perhaps I just picked a bad place to start. Another selling point was Meg Foster, who I've always been a mild fan of - despite her terrifying eyes - because of her ties to THEY LIVE and MASTERS OF THE UNIVERSE (both favorites of mine). Oh, and let's not forget the presence of the late Chris Penn. You'd think he'd be the main "heavy" in this movie, but he actually just plays a henchman who pops up at random times and barely has any lines. Penn's most memorable moment in this is probably when he oversells like a motherfucker during one of his fight scenes. 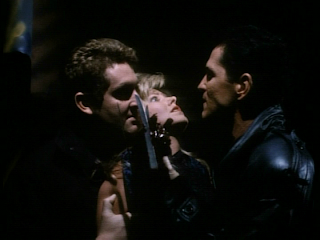 Speaking of the heavy, the bad guy in this is basically more of a perverted serial killer than the typical corporate villain you'd get in a futuristic dystopia film such as this. He's basically the enforcer for New Body who goes around and rips peoples' hearts out with some sort of claw. At one point it appears as if he violently retrieves a woman's heart through her vagina because of where he places his hand, but I'm pretty sure it's suggested that he enters his victims through the stomach rather than their crotch - although it'd be cool if he actually did tear out hearts through vaginas. Aside from his violent tendencies, the antagonist (whose name I already forgot) is pretty goddamn boring. 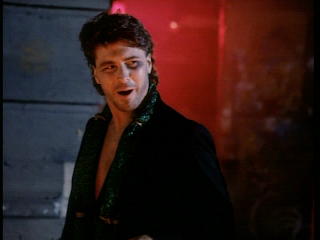 This is not the villain (unfortunately)

When it comes to 80s and 90s Sci-Fi movies such as this, I always get a kick out of seeing how these movies portray the future. In this film's version of the future, there are a ludicrous amount of fire barrels on the streets, and of course daylight is pretty much non-existent. The streets in FUTURE KICK may be crime-ridden, but apparently they're very warm due to the excessive amount of fire barrels. Hairstyles and fashion, however, are very much contemporary to the late 80s and early 90s - teased hair, mullets, etc. Also, to establish how crazy it is on Earth, Nancy gets insta-robbed as soon as her feet touch pavement. 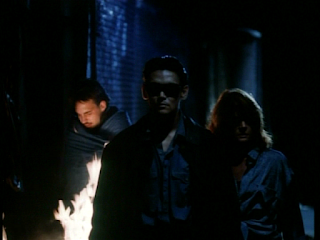 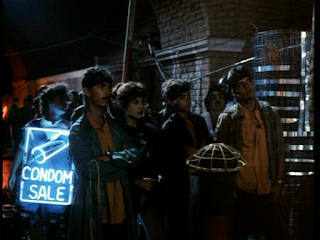 I'm pretty forgiving of a bad movie if it feels like there was at least an effort put forth by those involved, from the director to the actors to whoever. I can overlook a lot of flaws and obvious budgetary restraints and poor acting if there's any sign of care put into the product. Unfortunately FUTURE KICK lacks any heart whatsoever. You can tell that the makers of this film just pumped it out to capitalize on whatever trends were popular at the time, be it Action/Sci-Fi or the Virtual Reality craze. But it's not to say that FUTURE KICK is a complete waste of time. If you're a fan of unintentionally hilarious background ADR, you'll probably have a blast watching this movie based on the abundance of laughably-bad ADR alone. There's also a ridiculous amount of padding involving strippers; it seems like every five minutes or so - as if on cue - we get shots of topless women with teased hair and ass-lengthening panties dancing in some strip club. It got to the point where I found myself instinctively pulling folded-up dollar bills out of my pocket and waving them at the TV. 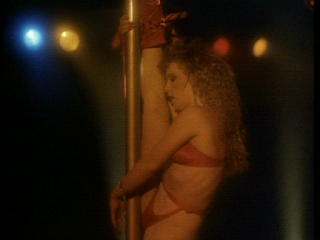 Another surprising element of FUTURE KICK was the violence. I mean it's no CANNIBAL HOLOCAUST or anything like that, but there's some decent gore in this nonetheless, ranging from a decapitation to a headsplosion to a mansplosion, and, of course, hearts getting ripped out like I mentioned earlier. Aside from the abundance of female nudity and absurd violence, though, FUTURE KICK doesn't really have much to offer. You'll get some laughs out of it, but not enough to justify me recommending it as a Saturday night beer-and-pizza movie to watch with friends. The whole Cyberpunk/Dystopia aesthetic is pretty lazy and clearly the result of a minimal budget and the filmmakers not giving a fuck, and the fight choreography and set-pieces are very lackluster. To be fair, though,  this was produced by Roger Corman. As much as we all love Roger, he was (and still is) known for pumping out movies at a fast pace; in 1991 alone, he produced eleven other movies besides this, and FUTURE KICK is certainly a victim of "quantity over quality". Like it or not, FUTURE KICK aims low and more or less hits the target. The fact that the movie, at one point, features an actual montage of - wait for it - strippers and death scenes should give you an idea of what's in store.