THE BULLET MAN is the third film in director Shinya Tsukamoto's TETSUO trilogy, and it revolves around a man named Anthony who begins a grotesque transformation following the death of his son. That's pretty much all the information I got from this movie that wasn't cryptic or symbolic. For those unfamiliar with Tsukamoto's TETSUO films, they're all essentially Body Horror movies that share similar themes of a lead character undergoing a bizarre transformation that sees flesh gradually replaced with metal; men becoming machines, essentially. While I haven't seen the second film in the trilogy, BODY HAMMER, I've done enough reading up on it (thanks, Wikipedia) to know that both sequels are basically re-hashes of the original with little tweaks here and there to make each one stand out from the other. 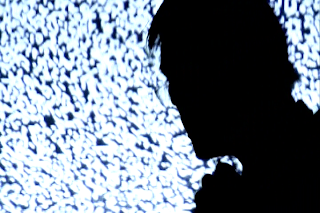 In BULLET MAN, Anthony's son is killed in a hit and run accident. While his wife openly grieves and wants to avenge their son's death, Anthony is a quiet griever who appears cold and numb in regards to the tragedy. Ironically, the man who apparently doesn't want to resort to violence literally begins to turn into a walking weapon. But this doesn't happen until someone breaks into his home and shoots him in the head. Instead of dying instantly like most people would, this actually marks the beginning of Anthony's transformation. His skin gradually begins to turn into a mound of misshapen black steel, as if the bullet carried a disease that subsequently spread throughout his entire body and produced metallic tumors. As the film progresses, Anthony receives clues and cryptic messages on his computer that point him in the direction of the man who killed his son. Conveniently enough, Anthony is literally turning into a walking firearm. 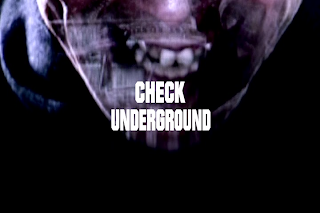 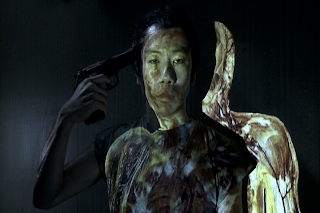 Initially, the film almost lost me with its dialogue and excessive shaky cam. To be fair, though, the dialogue was written in Japanese and delivered in English, and Tsukamoto (who also stars in the film as "The Guy") is a director who has a tendency to utilize assaulting visuals. BULLET MAN is an experimental film and an inherently divisive one at that, but, for me, as soon as that initial (and mostly uninteresting) hump of character development and set-up was out of the way, I found myself enthralled by the unrelenting imagery and sound that Tsukamoto brings to the table. If there's a film that perfectly captures the essence of industrial horror and the aesthetic of man colliding with machine, it's THE BULLET MAN (same goes for THE IRON MAN and, I'm sure BODY HAMMER). 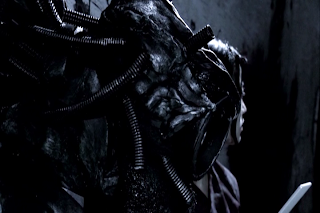 While the visuals are impressive, the sound design is perhaps the film's strongest area. When the titular Bullet Man emits any noise, it sounds like his voice is made of steel. That probably makes no sense whatsoever, but somehow this was achieved. As far as the visuals, the cinematography is great despite the epileptic camera work and solid gray and black color scheme. With BULLET MAN, you can also expect symbolism and allegory. I haven't read any other reviews of this film, and I don't know if this or any other of Tsukamoto's films have been dissected by someone who's far more qualified to do so, but, to me, the motives behind the killing of Anthony's son seemed irrelevant. The tragedic events in the film seemed like nothing more than a catalyst to awaken something dormant in Anthony - a part of his psyche and soul that needed to be tapped into in order for him to appreciate what he has. But of course this all just speculation and my own interpretation of an Arthouse Horror Film.

So yes, from a visual and aural standpoint, BULLET MAN was stellar in my book. The narrative though? Not so much. And just because it appealed to me in a big way as far as what I particularly look for in Sci-Fi movies and Body Horror, does that mean I'd go out of my way to recommend it? Probably not. As with any piece of art - regardless of how ugly or beautiful it is - it's subjective. For what it's worth, BULLET MAN bears similarities to David Cronenberg's THE FLY in terms of the obvious themes and also how drastic the lead character's transformation is, but this film is otherwise inaccessible to the casual horror fan.