An author named Hall Baltimore, who specializes in Witch fiction, arrives at a small, sleepy town as a part of his book tour. Disenchanted by headache-inducing Skype calls with his nagging wife and publisher, as well as the lack of interest from the town's citizens, Baltimore sets up shop in the town and attempts to write a new book inspired by a local mystery, legends of vampires, and a ghostly girl who glows in the dark and apparently wants her story told. Baltimore also consults with none other than Edgar Allan Poe in his dreams. Wut? 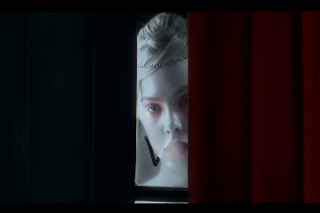 TWIXT is a film that was dormant for a couple of years for whatever reason, and out of nowhere it's now available on home video. Based on what little amount of footage I'd seen over the last couple of years, I've been very interested in checking it out. Oh, and not to mention that it's directed by the guy who made two of my favorite movies of all time and, at one point, was considered one of the best - if not the best - directors out there. Some would say that director Francis Ford Coppola has indeed fallen from grace and has joined the ranks of John Carpenter, Brian De Palma, Dario Argento, etc. as a filmmaker who has seemingly lost the ability to make a good movie and isn't the "master" that he once was. On one hand I can understand that claim. On the other I'd simply compare Coppola to one of my favorite actors of all-time: Robert De Niro. De Niro had one of the best runs in his day and has given some of the best performances ever put to film, but now he's at a place in his life and career where he doesn't need to do that anymore. De Niro has nothing to prove to anyone because he's been there and he's done that. Of course directors and actors are different beasts entirely despite being the two entities most responsible for carrying a film, but still. And I'm not saying Coppola should be automatically given a pass either; I'm just saying that I'm a bit more forgiving when it comes to his output compared to most directors who have lost their touch. 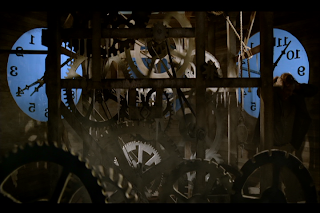 The longwinded paragraph that preceded this one is important in the context of my review. I went into this not expecting THE GODFATHER or THE CONVERSATION. Hell, I didn't even go into this expecting BRAM STOKER'S DRACULA. I just wanted it to deliver the crazy visuals I'd seen in whatever trailer I watched many moons ago, and deliver it did. This particular film was inspired by a dream that Coppola had, which is important to know considering how surreal, nightmarish, and - at times - incoherent this movie is. If I had to guess, I'd say this was an experiment of sorts for Coppola and an excuse to turn whatever he dreamt into a feature-length film. In that respect, Coppola succeeds. For the most part. 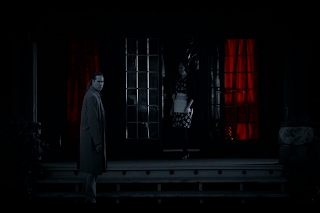 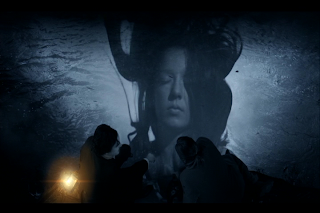 What initially came to mind when watching TWIXT was TWIN PEAKS. A lesser TWIN PEAKS, but TWIN PEAKS nonetheless, and this entirely has to do with how the small town in the film and its residents are portrayed. Veteran actor Bruce Dern plays the eccentric local sheriff who has a fascination with killing vampires and keeps the dead body of what he believes to be a bloodsucker in a walk-in freezer at the police station. There isn't a lot of focus on much of the town's other residents, but the general vibe, aesthetic, and suggested mythology is Lynchian - at least in my opinion anyway. 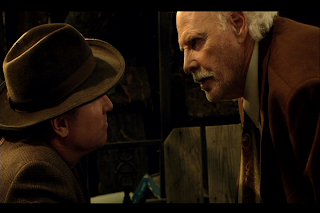 It isn't long before the film takes a strange turn and veers off into dream territory, and it's these recurring sequences of the film that truly stand out and make it special, despite some of the visual similarities to SIN CITY and the like. Coppola creates an interesting dream world set against a backdrop of tragedy, murder, cover-ups, the paranormal, and Baltimore's own issues and insecurities. Throughout the film, Baltimore comes to terms with his own problems and solves the town's biggest mystery through these wild dreams of his, and we as viewers are treated to some gorgeous visuals. I personally can't see the atmosphere and eye-candy of the film's more nightmarish moments not working for a lot of people. And the eerie score compliments the visuals quite nicely. The other stuff, though, like the comedic elements and the dialogue in general, will undoubtedly turn some people off. 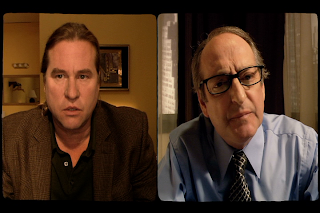 Ultimately, TWIXT is a love letter to Edgar Allan Poe and a film with awesome visuals and an inherently sloppy story. For what it's worth, I think this is a better "Poe movie" than THE RAVEN, but that's a discussion for another time. Personally, I thought most of the attempts at comedy were successful. I can't say the same for the dialogue and the acting though. The aforementioned ghostly young lady is played by Elle Fanning, who I've liked in what little I've seen her in so far. Her performance isn't so hot in this, but she has a great "sad" look for lack of a better term. As far as Val Kilmer... well, I think it's no secret that he's not the amazing actor he used to be, but I think he's fine in this. Not good, mind you, but serviceable. Kilmer had an opportunity to shine on more than one occasion in the film but seemingly didn't put forth much of an effort for whatever reason. My biggest gripe with the film is that it plants the seeds for an interesting story but doesn't really go anywhere with it. The ending is also rather abrupt and disappointing. But then again, most dreams are convoluted and end just as they're about to get interesting, right? Maybe Coppola was on to something here after all. Or maybe not. I'm just glad Francis Ford is alive and making movies. You should be too.