Left to care for her younger brother and drowning in medical bills, an unemployed young woman named Iris hits a financial rock-bottom and attempts to win a large sum of money by competing in a deadly game hosted by a sketchy (and apparently wealthy) man named Shepard Lambrick. At first it seems legit considering Iris's doctor set her up with Mr. Lambrick in the first place. And despite how he may come across, Lambrick claims he acts on behalf of a foundation that has the power to not only clear her Iris's debt but to get her brother the bone marrow transplant he needs to survive as well. I'm sure Lambrick being very secretive about what the "game" consists of is an automatic red flag, but, as someone who's been desperate for money myself, caution is the last thing on your mind when you have an opportunity to make buku cash. 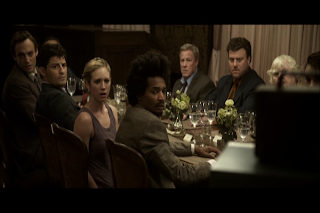 When Iris arrives at the Lambrick estate just a few hours after she receives his proposal, she's led to a room, where she's placed along with about ten other people who seem to be just as confused as her. Among them are an elderly woman, an Iraq War veteran, a recovering alcoholic, and a guy with a gambling problem just to name a few. Once the last person arrives, everyone's seated and the rules of the game are explained by Lambrick as his intimidating-looking butlers stand around the room like Secret Service. People are given the option to leave before the game starts, but everyone decides to stick around. However, it isn't long before shit gets realistic and all of the participants wish they never showed up in the first place. 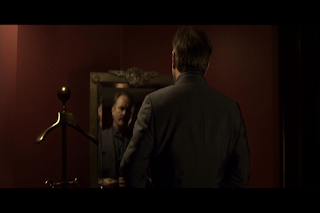 As the title suggests, the participants are put in a "would you rather" scenario, where they're individually given a choice to hurt someone else at the table or hurt themselves. As the game goes on, the level of danger increases, as does the potential to cause crippling damage to oneself or another participant. That's about all I'll say when it comes to the game, though, since the main thing that drives the film is waiting to see what comes next in terms of challenges. That said, there's not much to talk about considering most of the film consists of the characters participating in Lambrick's game. 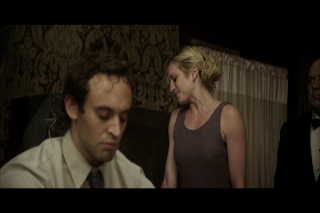 Pacing-wise, WOULD YOU RATHER isn't the most brisk movie you'll see, but it does move along at a decent pace thanks to some character development that coincides with the game. They're all essentially strangers at the start and we as viewers aren't given much in terms of investing in them. The only exception is Iris, who's established in an understandably quick and heavy-handed manner in order to set her up as the lead character. In a way, making Iris the lead character makes the film inherently predictable, but it's ultimately not about who wins the game rather than what that person has to do to make it happen. But anyway, as far as the characters, there's some good psychology in place in terms of how the good people are established versus the bad people. The film even goes so far as to present rivalries within the game despite the every-man-for-himself nature of it. The only person who seems to grasp the concept of disregarding teamwork is Sasha Grey's character, who's portrayed as the cold-hearted (and most dangerous) one of the bunch. 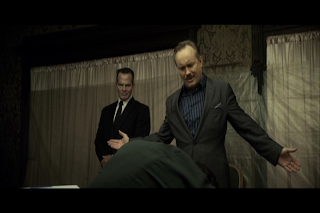 Shit gets pretty intense as the movie goes on. Comparisons could easily be made to the SAW franchise since those films deal with people who are competing against each other (or against the "host") in games where their lives are on the line. The are obvious differences, like the fact that the competitors in this film weren't abducted and taken somewhere against their will, but it's important to note that the pay-offs in this film aren't gory set-pieces like in the SAW movies. We do get some brutal violence in this movie, but the effectiveness has more to do with context rather than visuals and creativity.

WOULD YOU RATHER is one of those one-and-done kinda movies. It's inherently not very re-watchable because it relies so heavily on reveals throughout. Once you know what's coming next, it takes the excitement out of it, and all you're left with is... well, not a whole lot. The only reason anyone would theoretically go back to this film is to show it to other people, but Jeffrey Combs's performance could potentially make replays worthwhile. Combs essentially carries most of the movie with his performance, which makes sense since he apparently has a stage background and WOULD YOU RATHER unfolds like a twisted stage play with its confined setting and collection of characters. Not great but certainly worth a watch.