A red leprechaun named Farr Darrig and his entourage of pint-sized monsters are summoned from their fantasy world to the land of the living to wreak havoc on a group of models who are competing against each other on a reality show a la AMERICA'S NEXT TOP MODEL. But as far as who summoned them and why remains to be seen - well, at least in the eyes of the confused leprechaun anyway. We as viewers sort of know which of the characters is dabbling in supernatural spells and whatnot, but Farr Darrig - a fairy with a conscience - is oblivious to his summoner's motives and is forced to reluctantly carry out his cruel deeds to the unsuspecting models. 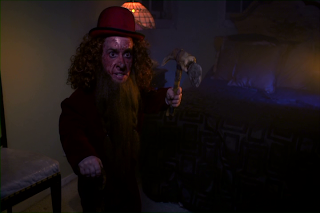 So we have a house full of models. A red leprechaun, a banshee, a cyclops, and a troll. Playboy playmates Nikki Leigh and Anna Sophia Berglund. Fetish model Masuimi Max. Throw those things together and it's seemingly a recipe for awesome, right? Despite never being a huge fan of director Charles Band's fixation with little people, I have to admit that I had a lot of fun with this movie. Charles Band has always been hit or miss with me, which is inherent due to how prolific he is, but when he does hit the mark, I have a tendency to be very forgiving of his films. Band and his Full Moon Entertainment both hold a special place in my heart (surely the same can be said for horror fans who grew up during the VHS era in general), but it's not to say that I have a high tolerance for everything he puts out. In the case of UNLUCKY CHARMS, it doesn't overstay its welcome, it never aspires to be anything more than what it is, and it has more soul than most summer blockbusters. 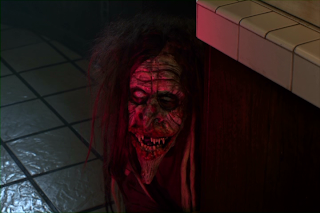 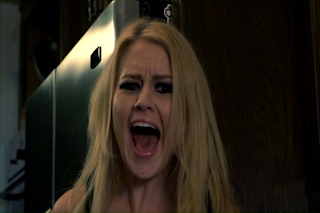 The only legitimate complaint I have about this film are the awful makeup effects, which are featured prominently from the opening scenes onward. Farr Darrig - who's based on an actual character in Irish folklore - just might be the worst leprechaun I've ever seen. Seriously, Hornswoggle from the WWE is a more convincing leprechaun than the pint-sized anti-hero in this film. It literally looks like Charles Band, or whoever was in charge of props and costumes, acquired the worst wig and fake beard they could find for actor Nathan Phillips. Not only that, but you can see where the beard is glued on to his face. Also, I'm not sure what his scabby-looking makeup was all about; Farr Darrig looked like he had a severe case of Herpes or something. As far as the other monsters, one of the actors had a rubber mask on but didn't even bother to put dark makeup around his eyes so it blended in with the mask. In other words, it just looked like a little person wearing a Halloween mask. I know Charles Band is a man who values quantity over quality, but that doesn't mean he can't find a competent makeup artist who can do a decent job in a fast-paced environment. 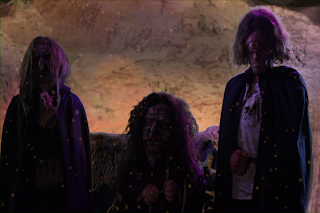 Aside from the fact that's it's... uh... short, what made UNLUCKY CHARMS a success for me was the dialogue and the characters. As far as the characters, there are three judges and five models. It's obvious that this movie taking a dig at reality television shows that focus on aspiring models, and the characters are a reflection of the type of people you'd see on those shows. For example, there's the token flamboyant homosexual character who's able to say whatever he wants and is able get away with it. That character (played here by Seth Peterson) had the potential to be irritating, but he ended up being one of the more entertaining characters and had some of the funniest lines. I also appreciate the variety of the models, in both appearance and personality. We have the competitive and back-stabbing one (Alex Rose Wiesel), the voluptuous dumb blonde (Berglund), the "plus-sized" one (Tiffany Thornton), the tattooed "alternative" model (Max), and the one who's self-conscious about her weight (Leigh). 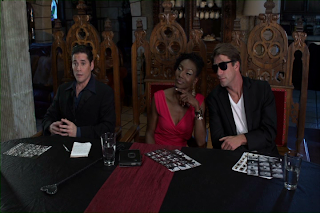 At it's core, UNLUCKY CHARMS is basically a re-hash of PUPPET MASTER, or any of Band's similarly-themed horror movies for that matter, in that you have a bunch of people in a house being preyed on by tiny terrors who are being controlled by someone for evil purposes, only for said tiny terrors to realize what's going on and subsequently "go into business for themselves". So yeah, this movie isn't really breaking any new ground, but it's not often you'll find a movie with a red leprechaun using magic and a glowing shillelagh to dispatch a bunch of sexy models. Ultimately, it's your typical Full Moon fare: lots of gratuitous nudity, hit-or-miss comedy, waist-high killers, and ominous synth music. I wish there was more of a mystery element as far as who summoned the monsters, but, when Masuimi Max and Anna Sophia Berglund are topless, it doesn't really matter.