In a futuristic world, a tyrant named Draculon gains the upper hand on society in a war between humans and an army of cyborgs, human turncoats, and zombie-vampire things. A fallen soldier wakes up in a Cyberpunk world littered with propaganda posters - resurrected as the bumbling Manborg - and teams up with a group of rebels to take down Draculon and his army. Comprising Manborg's group of allies are a freedom-fighting Martial Artist (and Liu Kang lookalike) #1 Man, a rambunctious, trigger-happy punk named Justice, and a knife-throwing New Wave Warrior named Mina. 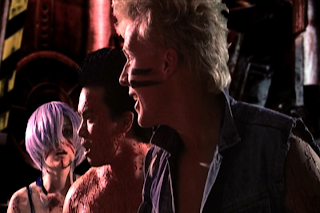 MANBORG is made by the team responsible for the neo-Grindhouse flick FATHER'S DAY. Judging by the output of this group of filmmakers and actors (collectively known as "Astron 6"), it's safe to say that they're big fans of 70s Exploitation and 80s Action. Following the release of GRINDHOUSE, a lot of up-and-coming filmmakers came out of the woodwork to follow in the footsteps of Robert Rodriguez (PLANET TERROR) and Quentin Tarantino (DEATH PROOF), and thus a number of homages to the low-budget genre films of yesteryear were born. The results have ranged from pathetic to great. Some would argue that the high point thus far has been Jason Eisener's HOBO WITH A SHOTGUN (also a Canadian production), which I would probably agree with (it far surpasses Rodriguez's own MACHETE in my opinion). While not quite on the level of HOBO for a number of reasons, I was pleasantly surprised by MANBORG nonetheless. 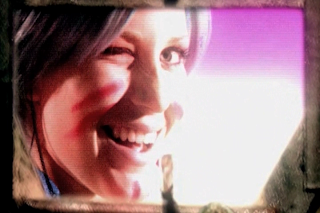 This film's influences are all over the place, some of which probably weren't even intended. Because of the Nazi undertones combined with a Dystopian backdrop, I couldn't help but think of CAPTAIN POWER AND THE SOLDIERS OF THE FUTURE. As far as the visuals and overall style, I don't even know where to start. It's like if Jim VanBebber (circa DEADBEAT AT DAWN) tried to make TRON with no money. The design of Draculon and his minions resemble Dr. Satan from HOUSE OF 1000 CORPSES or, more recently, the creatures from FRANKENSTEIN'S ARMY, albeit not as ambitious or excessive. The design of Manborg himself is pretty much a straight-up copy of the hero from ELIMINATORS. The three main antagonists, Draculon, The Baron, and Shadow-Mega are basically Destro, Cobra Commander, and Baroness from G.I. JOE. Visually, it's as if this exists in the same world as the original Mortal Kombat game (with the Blood Code turned on of course). Oh, and did I mention that this was only made for $1000 (Canadian)? 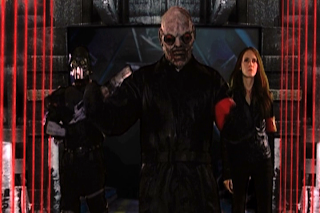 The raw, low-budget appearance of MANBORG might be hard for a lot of people to overlook, which is understandable. But, for me, it was easy to get beyond that once I understood what the filmmakers were going for. It also took no effort on my part to appreciate this movie beyond its surface level once I saw how much the filmmakers were throwing at the wall. MANBORG totally hits the spot for me, and I'm sure it will for most of you if you're into 80s genre movies that had a a Punk edge to them, whether it be the films of Troma or the ridiculous, low-budget Post-Apocalypse/Dystopian films from back in the day. 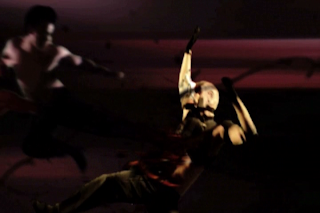 Considering the budget, MANBORG is pretty amazing. The action and cartoonish violence are plentiful, and it's a lot of fun overall. There may not have been a lot of money behind this, but I personally think it looks way better than it has any business looking. Mind you, a couple of the main people behind the scenes of MANBORG do Special Effects work on high-profile films, so there's obviously a lot more skill going into this than one would assume. If the Astron 6 crew continue to show this much heart, creativity, humor, and enthusiasm with future projects, I'm more than excited for anything they put out from this point forward.