GIVEAWAY: Admission for Two to see ALL IS LOST

Time for another giveaway, Death Rattlers! This time, you can win two free tickets to see ALL IS LOST - a survival Thriller starring Robert Redford, produced by Zachary Quinto (STAR TREK, AMERICAN HORROR STORY), and written & directed by J.C. Chandler, who also made one of my favorite films of 2011, MARGIN CALL.

To enter, simply leave a comment with your e-mail address and a personal story of survival. Your story doesn't necessarily have to be about surviving in the wilderness or being stranded out in the middle of the ocean... it can be a life story. Surely we've all overcome obstacles at some point in our lives and came out the other side a better person, so maybe you could share a story about that. Or, maybe you came face to face with a Chupacabra and lived to tell about it? Did you enter a grueling Kumite Karate tournament and come out the victor? Whatever the case, share a story, leave your e-mail address, and be entered to win two free tickets to ALL IS LOST. For more info on the film, check out the APP and read the description below. 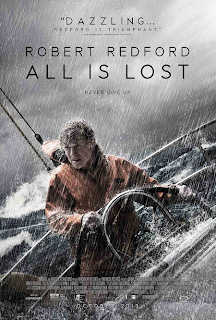 Academy Award® winner Robert Redford stars in All Is Lost, an open-water thriller about one man’s battle for survival against the elements after his sailboat is destroyed at sea. But with the sun unrelenting, sharks circling and his meager supplies dwindling, the ever-resourceful sailor soon finds himself staring his mortality in the face.
Written and directed by Academy Award nominee J.C. Chandor (Margin Call) with a musical score by Alex Ebert (Edward Sharpe and the Magnetic Zeros), All Is Lost is a gripping, visceral and powerfully moving tribute to ingenuity and resilience.
All Is Lost opens in NY and LA October 18, nationwide October 25th.
“OFF THE SCALE BRILLIANT”
- Emma Pritchard Jones. THE HUFFINGTON POST
"ROBERT REDFORD DELIVERS A TOUR DE FORCE PERFORMANCE”
- Pete Hammond. DEADLINE