Yeah, so I was in the mood for a light, Halloweeny movie, and this is what I settled on. R.L. Stine's HAUNTING HOUR (the series) is not something I'm familiar with, but I recognized this particular movie from my many shameful trips to Wal Mart. DON'T THINK ABOUT IT is one of those movies that forever has a spot in Wal Mart's cheap bin, so I've at least glanced at this movie on many occasions, along with a lot of the GOOSEBUMPS double-feature discs as far as horror movies aimed at a younger audience. I didn't impulse buy this (thankfully), but I saw it during a recent visit to the video store and figured I'd check it out. At the very least, Tobin Bell from the SAW movies is in this. 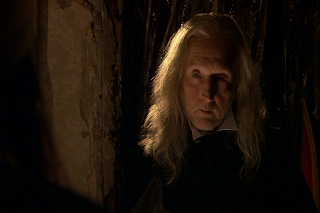 Seeing as this is rated-PG and seemingly aimed at a pre-teen audience, I was curious to see how far it would go with its horror visuals and whatnot. I'm not a parent, nor am I some old creep who seeks out teen horror movies on a regular basis, so DON'T THINK ABOUT IT is a film that takes me out of my element in some ways. For one, I have no idea who the young actors in this are. I'm sure some of them are/were popular in their circles, but they're completely alien to me. That said, there's not a lot of context for me to draw from when it comes to this, so I viewed this purely as an easily-digestible standalone film and through the eyes of an adult with no expectations other than to be entertained. 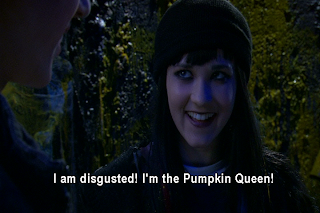 Right away we're introduced to the Kellers - an upper middle-class family who lives in the suburbs. The parents seem pretty cool, fair, and supportive, but yet their daughter Cassie is a rebellious Goth. I guess she's just going through that weird phase in her life where she wants to find her own identity through experimentation. I've been there before. Plus, when you're dealing with a young person who lacks confidence and isn't sure about what they want, rebellious behavior comes with the territory. It's not so much that they hate the people around them; they just need their space. And yes, I'm examining the psychology of a teenage Goth chick in a PG movie, so perhaps I should move on. Rounding out the Kellers is Cassie's only sibling, which would be her obnoxious little sissy of a brother, who I wanted to smother to death with a pillow. 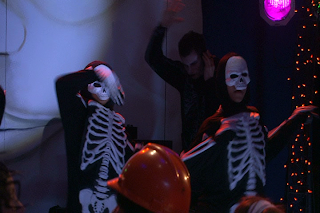 DON'T THINK ABOUT IT is set on and around Halloween, which is the only reason I watched it. The film basically follows Cassie as she acquires a book from a Halloween-themed antique store (owned by Tobin Bell's character, who's in the movie for a total of, like, five minutes) and accidentally unleashes a monster once reading said book aloud (the first page of the book is a warning against reading the book aloud). Long story short, the monster abducts Cassie's little brother and her rival from school (the stereotypical stuck-up, popular chick), so she teams up with the boy she has a crush on (the boyfriend of the popular chick), and together they attempt to raid the creature's lair and rescue its potential dinner. Apologies for excessive use of parentheses. 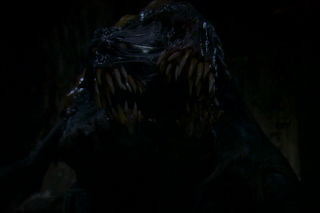 So, I had a few issues with this movie, mostly as it pertains to Cassie. For one, there's a scene where she chats up one of her classmates about Edgar Allan Poe and basically geeks out. I wasn't sure if this was a sincere attempt at portraying Cassie as a smart horror fan, or if it's just making fun of "horror nerds". I really couldn't tell, and I think it could go either way depending on who watches it. As a "horror nerd", I found it to be slightly insulting. My other issue with Cassie is that she's simply not very likable. Earlier I mentioned Cassie as being someone who's unsure of who she is and what she wants, but that only goes so far before she crosses the line into "bitch" territory. At one point, she gets revenge on her rival by pulling a prank and embarrassing her in front of the entire school. Granted this incident is just a reaction to Cassie being bullied, but, ultimately, it shows that she's not much different than her cruel peers. This seems to be sending the wrong message to the film's demographic, and it makes the film's heroine look like a douchebag. 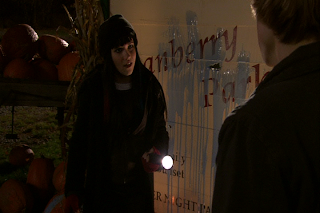 When it was all said and done, I was kinda bored by this movie and underwhelmed by it, mainly because I wasn't really feeling the "Halloween vibe". There's a Halloween dance, trick-or-treaters, lots of costumes, and lots of pumpkins and jack-o-lanterns shoe-horned into as many shots as possible, but it still didn't really feel like a Halloween movie for some reason. Visually, yes. But that's about where it ends for me. On a positive note, I was surprised by some of the horror visuals. It goes without saying that this is a tame, bloodless film, but the creature (referred to as "the Evil Thing") looked great, all things considered. The design and look of the creature is just about right for the Jr. High crowd, but it might be a little too intense for young children. It's obviously animatronic because of how robotic and jerky its movements are, but it's completely practical, which is a plus. There's also some decent horror atmosphere despite the lightheartedness of the film, thanks to some good lightning and serviceable set dressing and whatnot.

A warning, though: should you ever find yourself watching this movie, do yourself a favor and turn it off right when you hear a voice saying "Happy Halloween" at the end. If not, you'll immediately be thrust into a music video featuring actress Emily Osment singing the film's theme song, which kinda ruined the experience for me. Speaking of which, the music in this is AWFUL. It's the most generic pop-punk you can think of. I'm not gonna lie, there's some pop-punk I still listen to (I'm talking post blink-182 pop-punk; O.G. pop-punk like Buzzcocks will forever have street cred), but the shit in this makes Good Charlotte sound like Dream Theater. Ugh.