If I was one of those people who substituted names of films with witty quotes for the titles of my blog posts, I could have some fun with this one. "Who Let the Dogs Out", perhaps? Or I could just make an obscure reference that only fans of Dillinger Escape Plan or Mike Patton would pick up on, like "When Good Dogs Do Bad Things". "Barking Up the Wrong Tree", maybe? The possibilities are numerous when it comes to a movie about killer dogs. But they'd all pale in comparison to the film's tagline: "Play Dead". Simple, effective, and bonus points for having a double meaning. Fortunately for whoever's reading this, I'm not a witty person, so I can at least promise a pun-free review. 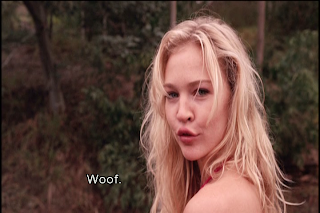 THE BREED is about a group of friends (two of whom are seemingly wealthy brothers and another of whom is The Mighty Michelle Rodriguez) who set up shop at a lakehouse for a few days of partying, only to find out the hard way that the surrounding area is infested with killer pooches. When we're introduced to them (the friends, not the dogs), they're on their own personal prop jet and spewing expositional dialogue at each other. What I gathered is that one of them is a medical student, so it came as no surprise that this ended up paying off in the film somehow. Anyway, what I found interesting about this group, once they got settled into the lakehouse, was that the pretty-boy douchebag character is the odd man out, which is strange when you consider the horror movie stereotypes. The douchebag typically has the girlfriend who's the complete opposite of him in terms of personality, but not in this case. So yeah, there's that. 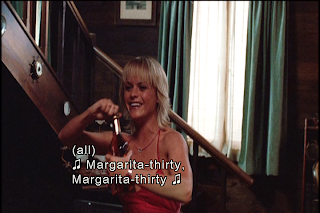 If there's one thing I took away from this movie, it's that Michelle Rodriguez actually looks good when she smiles. Who'da thunk? Also, Taryn Manning seems like a cool chick in real life. Not that you'd gather that from watching this movie, but her personality sort of comes out through her performance. As for the rest of the gang, I don't recognize any of them, but there's tons of chemistry between the collective group of actors. As the movie goes on, it's suggested there's some tension between certain members of the group, which eventually rears its head during some of the more tense moments later in the film once they find themselves under attack. 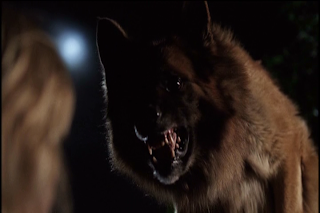 Early in the film, one of the characters is bitten by a dog and is subsequently infected with rabies. I'm not familiar with the symptoms of rabies, so I'm not sure how accurate this movie is when the aforementioned character's behavior begins to drastically change within a few hours. You'd think this person got bitten by a zombie judging by how much it changes their personality. But then it's eventually revealed that the dogs on the island are all carriers of some sort of super rabies. There's a lot more to it than that as far as the dogs are concerned and why they're so aggressive (and intelligent), but I won't get into that. Ultimately, THE BREED basically turns into WHO CAN KILL A CHILD? meets CUJO, albeit not as tense or well-made as either of those movies. 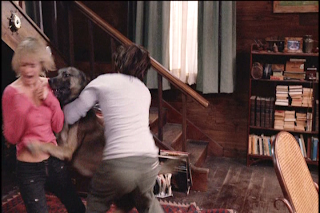 At first I wondered how believable a bunch of dogs would be as a threat to the young and perfectly able-bodied people in this movie. But, when you think about it, anything can be scary. Domestic cats can be scary. Birds can be scary. It just depends on how you shoot them. Speaking of which, even the nicest dogs can appear monstrous if you shoot them properly, give their scenes some context, and of course do some fancy editing work in post-production. Personally, I love watching dogs i movies - especially horror. The whole process of shooting around dogs and having their trainer right off camera giving them commands is really interesting to me. That said, the dogs in this are fucking rock stars - obviously well-trained and fun to watch. There are also some great shots of the animals and humans being physical with each other, be it someone getting attacked or a dog getting swatted with a baseball bat. 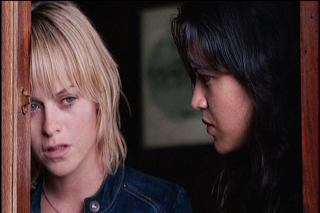 Overall, THE BREED isn't as effective a thriller as it could've been. It's perfectly fine, but it's certainly not gonna go down as one of the all-time great Animal Attack movies. It is remarkable, however, for the great stunt work and the performances of the dogs. The use of CGI is seemingly relegated to cleaning up certain shots or adding things to shots that they simply couldn't achieve in a practical manner (a dog getting shot with an arrow for example). I give director Nicholas Mastandrea for refraining from his use of CGI and making this movie as old-school as possible. For that alone, I'd recommend people give this a look.