Led by the eccentric Alby the Cruel (played by Anthony Kiedis's dad!), a group of terrorists hijack a bus full of American tourists in the Philippines. Not appearing to be all that concerned about it, the American government sends out a couple of anti-terrorist agents to reclaim the hostages and stop the terrorists dead in their tracks. Comprising the anti-terrorist team are Spike Shinobi ("Captain of the Dart Team", lollipop enthusiast), Steve Gordon (Spike's "American counterpart", womanizer), and Jennifer Barnes (Communications and Control, eye candy). Meandering ensues. 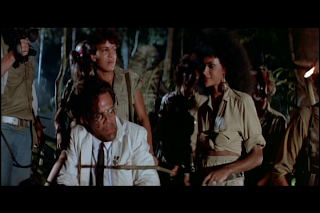 You'd think that the terrorists would be ninjas considering this movie is called 9 DEATHS OF THE NINJA, but it's not the case. The title has the word "Ninja" in it because its lead actor, Shô Kosugi, was basically the king of ninja movies at one point, and the only reason he's not the king anymore is because ninja movies aren't as prevalent as they once were. But then again, I guess he's still the king by default. In any event, when I think of ninja movies, I - and I'm sure most people - think of Shô Kosugi. In this film, he plays someone who went through ninja training and failed because he's essentially too nice and has a tendency to show mercy. Sadly, the only ninja action we get from Shô is through a flashback sequence that shows his training; he's in civilian clothes throughout the film but incorporates ninja techniques and ninja weaponry into his terrorist-hunting. Oh, and there's also a group of ninjas, who are seemingly unrelated to the storyline, that pop up in the last ten minutes. 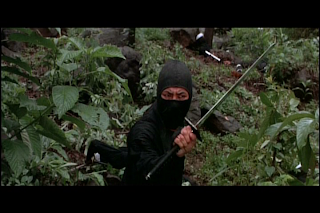 After we're introduced to the protagonists via an anti-terrorist training set-piece, the film cuts to what is easily one of the most bizarre opening credits sequences I've ever seen, which consists of a shirtless Shô Kosugi standing in the corner of a white, smoke-filled room with a sword while three mulleted women in leotards do ballet in the foreground. Needless to say, this movie had my full attention at this point. 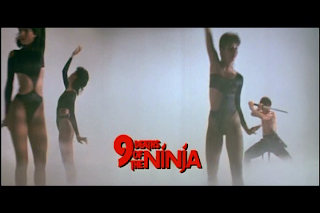 Unfortunately, 9 DEATHS OF THE NINJA ends up being a boring film full of missed opportunities, which is a shame since this is one of the Kosugi joints I've been wanting to see for a while. I honestly don't even know where to start, and I'd hate to say that pretty much everything about this movie sucks despite the fact that I believe it to be a true statement, so I'll at least try to explain why I think it drops the ball on numerous occasions. But first I'll run down some of the few positives that this atrocious film brings to the table. If there's one thing the filmmakers did right, it's get as much out of shooting in the Philippines as they could. The outdoor settings and landscapes in particular are beautiful. Also, 9 DEATHS marks the only appearance of Aiko Cownden - a stunning, exotic beauty who unfortunately never made anything else. 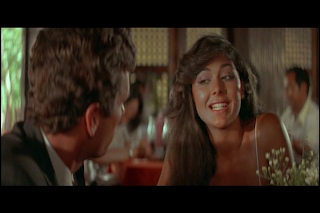 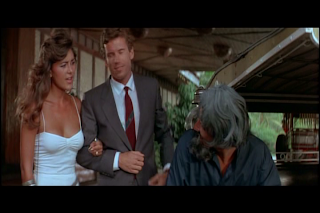 Yep, that's pretty much it. Oh, and this happened... 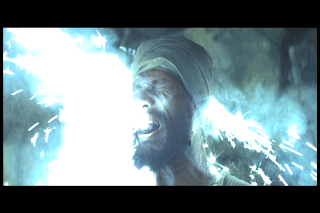 And now for the negatives. Basically, it all comes down to 9 DEATHS being inexcusably boring. Plain and simple. First of all, there's barely a score for some reason, so there are a lot of times where you'll find Shô Kosugi or another character walking around the city in awkward silence. And, as a whole, it feels lazy in pretty much every way. There's never a sense of urgency to the action scenes, and, while the action set-pieces are somewhat plentiful, they're all presented in quick bursts and come to a screeching, anti-climactic halt each time. I mean, seriously, how could you fuck up a gang of Filipino midgets? 9 DEATHS figured out a way. 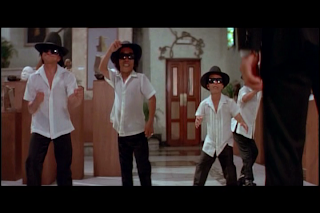 On top of everything I just mentioned, the characters suck. The protagonists are supposed to be these bad-asses who work for the government, but they come across more like bumbling gumshoes. Plus, Brent Huff (who I'm not a fan of in the first place) and Shô Kosugi have zero chemistry, and any attempts at making them an effective odd couple were failed. And the terrorists. The terrorists are pretty goddamn awful, and, by that, I mean watching them gave me a headache. Their leader, Alby the Cruel, is like a combination of Dr. Strangelove, Bobcat Goldthwait (circa POLICE ACADEMY), Werner Herzog, and Jar Jar Binks - sounds potentially entertaining, but I assure you it's far from the case. Ugh. 9 DEATHS OF THE NINJA made me want to put a stick of dynamite in my mouth and light the fuse. It's essentially like an Andy Sidaris movie minus the fun (and minus the excessive female nudity).