NINJA DEATH is the first film in a trilogy, which I was aware of going into it. But what I didn't know is that all three films are connect together to tell a single narrative. In other words, this particular film doesn't wrap up with any sort of closure; instead, it ends on a cliffhanger designed to get you to watch the next movie and continue the story. I don't know much about the background of this film, and even IMDB has very little info on it, so I'm not sure if it was ever released as one really long film and eventually split up into three parts, or if they filmed a bunch of shit all at once with the intention of releasing it in three chapters. Whatever the case, I can't say I give a shit enough to watch the rest of the trilogy, so what I'm essentially reviewing here is the first act of an epic ninja movie. 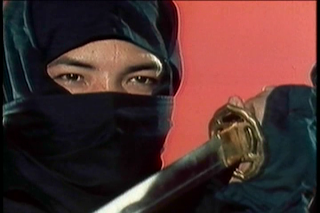 Lead character Tiger runs a brothel, but problems arise when a rival brothel opens nearby. Not only that, but the other brothel is being run by those dirty Japanese! Tiger panics and seeks the help of a martial arts master who's simply referred to as "Master" throughout the film. Master basically beats Tiger's ass and goes on to teach him discipline and fighting techniques. Tiger didn't necessarly want to be trained, but Master forced it upon him, basically because he (Master) sensed danger when he was informed of the Japanese presence. From there, we're introduced to the film's antagonists - Grandmaster and his henchman "Devil Mask". I was never quite sure what Grandmaster's ultimate intentions were, but surely they're evil and dastardly. Once the introductions are out of the way, what ensues is an extremely convoluted and incoherent story. 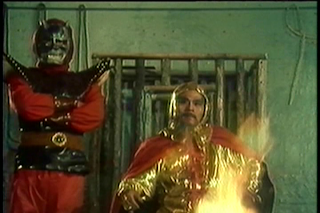 NINJA DEATH is a film padded with confusing flashback scenes and a training montage so long that the song on the soundtrack stopped, started over, and played again. Apparently there are people out there who are big fans of not just this film but of the entire NINJA DEATH trilogy. To be fair, in the right setting and in the right frame of mind, this could potentially be awesome. I obviously can't speak for the other two movies at this point, but I'm willing to bet they're just as bizarre as this one. Personally, having watched it by myself, this was a fucking chore to get through. In the end, though, I found this to be a lot more disappointing than "bad". NINJA DEATH starts out on a fun note but frustratingly declines into utter nonsense. 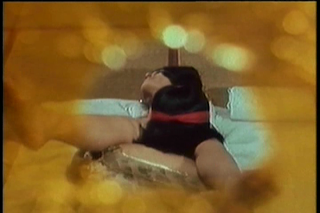 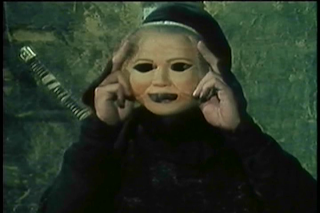 A highlight of NINJA DEATH is definitely its opening credits sequence (which was apparently recycled for the other two movies in the trilogy), which is basically a showcase of the characters we'd eventually be introduced to. It starts out with two ninjas - a blue one and a black one - who apparently don't know each other and seemingly just happen to be in the same red-walled room doing flips and minding their own business. All of a sudden they see each other from across the room and subsequently clash. And then it cuts to some oiled-up shirtless guy (later revealed to be Tiger) throwing up the DDP Diamond Cutter symbol and flexing his pecs. Out of nowhere, he's ambushed by the same two ninjas who were fighting each other, and from there it basically turns into a ninja battle royal as more of them join in - including a gold shiny ninja (Grandmaster), a teleporting female ninja, and a red ninja with a demon mask (Devil Mask). Seriously, that could've been the whole movie right there and I would've been fine with it. 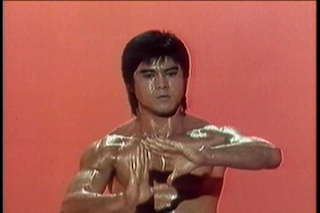 One thing about NINJA DEATH that I did enjoy was the humor. The initial brothel scenes are pretty hilarious and feature a lot more colorful language than I'm accustomed to hearing in a martial arts flick. For example, there's a great scene where Tiger briefs one of his prostitutes on proper orgasm etiquette. Pretty much any scene involving the prostitutes in general are fun, and the English dubbing throughout is easy to make fun of, especially when some of the characters inexplicably start speaking in British accents towards the end. Another highlight is the character of Devil Mask. He's basically Kyo from THE OCTAGON meets Frankenstein's Monster - a mindless killing machine who ultimately ends up being a tragic monster of sorts, and a true bad-ass of a ninja despite the fact that he's at the mercy of a magical flute that Grandmaster plays to scramble his brain. 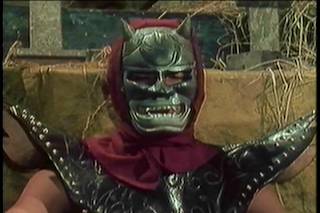 NINJA DEATH certainly has its moments and, as I said earlier, could be enjoyable if one were to watch it in the right frame of mind, but I just couldn't get beyond how much of a trainwreck it is and how difficult it was to follow the story. By the time it was all said and done, even as a completist who has to watch everything, I could've cared less about how the rest of the story would play out in the subsequent films, but I think NINJA DEATH is bizarre enough for me to recommend it to anyone beyond ninja completists. Just be prepared for a frustrating amount of padding, a story that makes little (if any) sense, tons of homoeroticism (which isn't necessarily a bad thing), reptile cruelty, and unlikable characters pretty much across the board. On the bright side, NINJA DEATH has a lot more stunt dummies being launched/kicked across the scenery than any 83-minute movie has any right to feature.