I haven't seen FUTURE-KILL since the 80s and I'm not sure if I even watched it all the way through. But man, I thought the artwork for this was the coolest thing I'd ever seen as a kid. At the time, I had no idea who H.R. Giger was, let alone that he was the artist responsible for such an evocative piece. As I got older and started reading Fangoria, I learned about H.R. Giger and became fascinated with his style of art. So yeah, this silly Sci-Fi slasher was my introduction to the late Hans Rudolf Giger, one of the most unique artists of our generation. And, like pretty much every other genre film of the 80s, it isn't nearly as cool as the artwork. 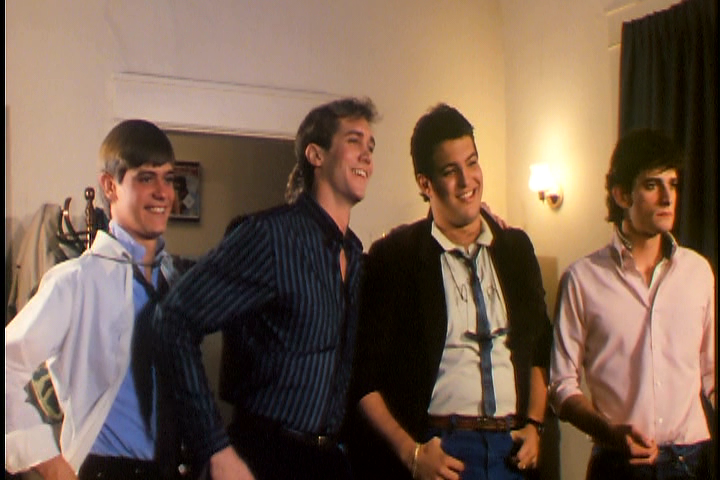 I recall somewhere FUTURE-KILL being referred to as "post-apocalypse". It certainly has a post-apocalypse aesthetic to it, but it seems more like some typical 80s sex comedy that just so happens to be set in a city that contains a post-apocalypse-ish neighborhood, if that makes any sense. The protagonists in the film are your run-of-the-mill 80s college frat boys who cross paths with a group of New Wave Warriors who call themselves "Mutants". To be more specific, the Mutants (not actual mutants) are members of an underground movement with a political agenda. They protest the manufacturing of nuclear weapons and champion themselves as a "non-violent" group, but yet there are crimes tied to them, like arson and even murder. 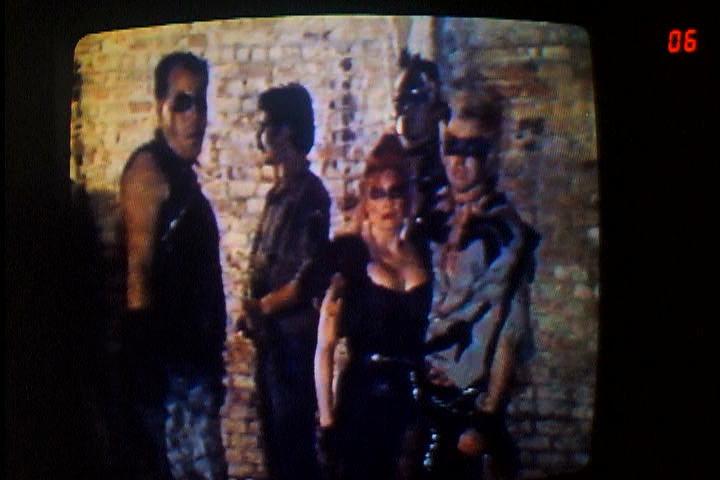 As far as the frat boys, they're punished for playing a cruel prank on the president of a rival fraternity, so they're sent to the shittiest part of town and are given the task of kidnapping one of the Mutants. Despite posing as New Wave "freaks" and going undercover, the mission goes horribly wrong when some of them are killed by a character named Splatter, who's basically a rogue Mutant - the loose cannon of the group who goes into business for himself and even betrays one of his own fellow protestors. The film subsequently turns into a weird Sci-Fi slasher, with Splatter hunting the remaining yuppies and attempting to eliminate them. 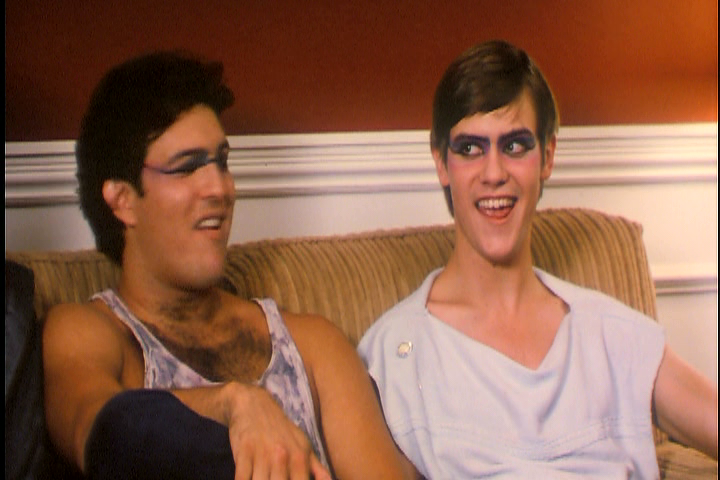 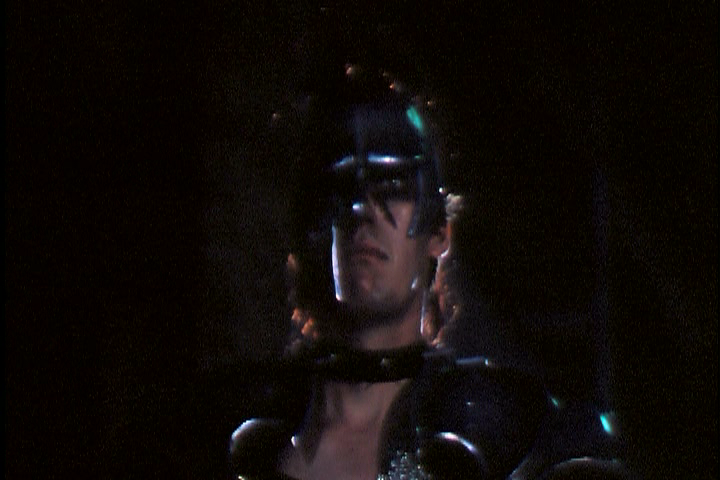 The character of Splatter (played by Edwin Neal of TEXAS CHAIN SAW MASSACRE fame) basically looks like a clawed, punk rock version of ROBOCOP. He's apparently bitter because of an accident that caused him to acquire an artificial hand and a mask to cover his scarred face. That said, I guess someone behind the scenes was a fan of TEXAS CHAIN SAW MASSACRE because FUTURE-KILL also features another TCM alum, Marilyn Burns, as one of the Mutants. Had I went into this completely blind, I wouldn't have even known it was Edwin Neal playing Splatter unless someone told me. As far as Marilyn Burns, she looks and sounds like she smoked eighty-thousand cigarettes since TEXAS CHAIN SAW. Yeah, she hasn't aged gracefully. I still love the shit out of her though. 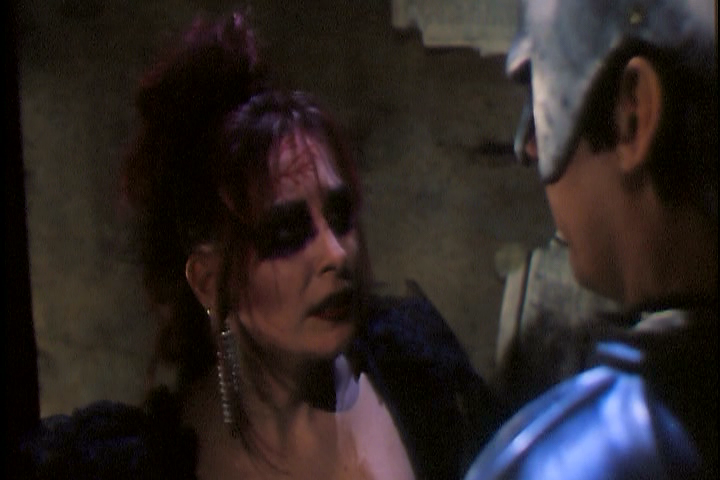 FUTURE-KILL is an easy movie to make fun of for a number of reasons (bad fashion, worse dialogue, worser acting), but I personally chose to laugh with it. It doesn't have the most compelling story, but visually it's right up my alley. I love the ridiculous punk/new wave-inspired fashion trends of the mid to late 80s, and this movie is rife with big hair, garish dye jobs, and war paint. 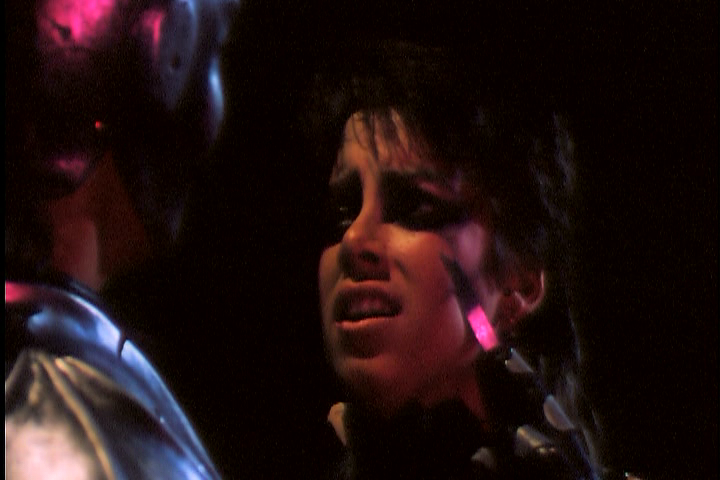 The slasher element of FUTURE-KILL is a bit disappointing, but then again it wouldn't be fair to rate this against the other slashers of its era. It's more of a Sci-Fi Action movie than anything. Still, though, it could have been a lot more over-the-top and absurd than it ended up being. If I had to guess, I'd say that budgetary restraints prevented the filmmakers from making this a full-blown slasher full of gory death scenes in the vein of a FRIDAY THE 13TH movie. It's also strange to see a group of men as the characters in peril. However, I use the word "men" loosely when referring to the yuppies in this movie. The movie as a whole is kinda boring aside from some humorous moments here and there involving bored hookers and whatnot. For me, it's all about the visuals. Costumes and fashion aside, the film is also stylish from a technical standpoint - to a degree. FUTURE-KILL also has some noteworthy production value for some of the street and alleyway scenes as well, and of course all the moody synth music your ears can handle. In a day and age when filmmakers are embracing the 80s and making retro-style movies, it's cool to go back and watch something like FUTURE-KILL and see a snapshot of what they're emulating. Blink and you'll miss a cameo from  young John Hawkes, who'd go on to be deservedly nominated for an Oscar in 2011 for his performance in WINTER'S BONE.