This is another review of one of the many films that the Movie and Music Network has to offer. To watch this movie for free, check it out HERE. And if you plan on signing up for the site (which you should!), be sure to click my banner on the top of the sidebar or click HERE to sign up with my special promo code. Either way, be sure to at least take a gander at their site - there are tons of horror and exploitation movies available to stream for a low monthly price.

As with your traditional slasher, SLAUGHTERHOUSE opens with a couple of good-looking 20-somethings being dispatched to the big pig-pen in the sky in what appears to be a territorial killing when they stray from the path and set foot where they don't belong. However, the aptly titled film quickly goes in a rather unconventional direction during the subsequent opening credits as we see actual footage of pigs being prepped and eventually butchered as a playful jazzy number accompanies this confrontational montage.

As SLAUGHTERHOUSE progresses, it plays out like the inbred cousin of TEXAS CHAINSAW MASSACRE 2 and MOTEL HELL for obvious reasons. We're introduced to one of the antagonists, Lester Bacon - a stubborn old butcher whose refusal to accept a pay-off causes the County to foreclose his property and give him and his monstrous, dim-witted son Buddy the boot. In the midst of all this, a group of college kids are trying to make some kind of horror movie, which adds a "teen slasher" element to contrast the adult characters like the local sheriff and other authority figures and business types who pose a threat to the Bacons. 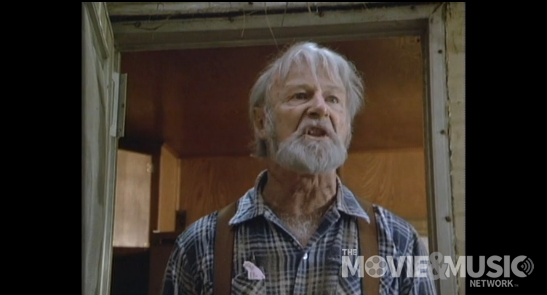 Again, lots of similarities to TEXAS CHAINSAW lore. It feels a lot more like the sequel to TEXAS CHAIN SAW MASSACRE because of its lighter tone, but, if this were set about 15 years earlier and the names of the characters were changed, this could easily have been a prequel to the original 1974 classic directed by Tobe Hooper. Lester, for example, in the wake being put out of business by a mechanized slaughterhouse, laments the old-fashioned slaughterhouses and the hands-on approach to butchering animals as if it were an unappreciated art form, which echoes the Hitchhiker's rambling diatribe in the original TCM. Also, Lester's son, Buddy, is essentially Leatherface minus the flesh fetish. On a side note, the film sort of alludes to Buddy being the product of an affair between his father and a pig, but the only evidence is that Buddy grunts and squeals as a means of communicating. 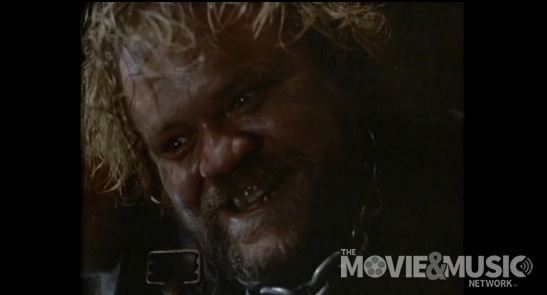 The body-count slasher elements are present, as in there's a select group of young people being picked off by the killer (Buddy), but it also plays out like a revenge movie of sorts as we get a lot of insight into the struggle of Lester and his wild offspring. They take their frustrations out on the people who matter, but they also turn their collective attention towards the regular townfolk, which is where the slasher element truly comes into play. Things come to a head between the Bacons and their potential victims when, in an attempt to film their horror movie, the protagonists infiltrate the territory of the killer and his deranged father. 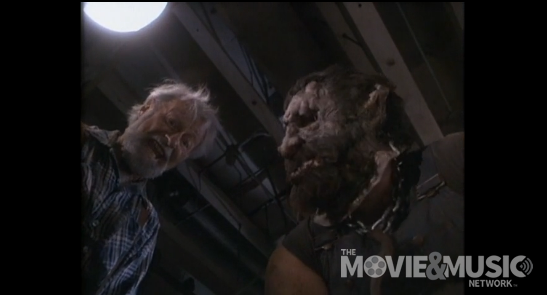 Personally, I found the bad guys to be considerably more interesting than everyone else, especially the bland Final Girl with the peculiar name of "Liz Borden". But I guess this shouldn't come as too much of a shock considering how much time the movie spends with the antagonists; instead of mysterious figures who periodically emerge to claim victims and retreat back into the shadows, the Bacons get a lot of screen time and are even sympathetic to a degree. And despite not saying a word, Joe B. Barton makes up for it with a great screen presence as Buddy. He's one of the more likable cold-blooded killers I've ever seen in a slasher movie.

Speaking of slashers, there's a high body count but this isn't a creative kill type of slasher movie with elaborate death scenes. The kills are somewhat basic but satisfying nonetheless in terms of getting the slasher pay-offs. People get bludgeoned to death, throats slashed, and ran over with cars, etc. So yeah, SLAUGHTERHOUSE isn't one of the all-time great slashers, and it's far too similar to some of the aforementioned movies to be groundbreaking, but it's very watchable, with the only major flaw (aside from a lack of originality) being an ending that falls a little flat.