For the next week I'll be reviewing all twenty-two episodes of the first season of SUPERNATURAL. As I mentioned in another post, I initially had no intentions of ever watching the show, but I found seasons one through five on sale for pretty cheap and bought them, so, of course, now I feel obligated to watch them all as soon as possible. 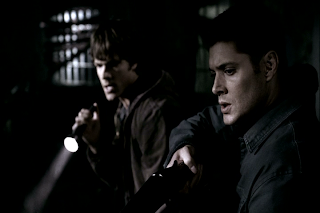 Before I get to the reviews, a precursor is in order. SUPERNATURAL is a television show on the CW network that debuted in late 2005 and is currently in its 6th season as of this writing. My policy has always been to keep reviews spoiler-free, but seeing as I'm covering a television show that's been around for six seasons, it would be a bit tricky and tedious to beat around the bush, especially when you consider the fact that the synopsis for the second season gives away the ending of the first season, and so on and so forth. That being said, these reviews won't cater to anyone who hasn't seen the show, but, at the same time, the show has been on television for a long-ass time, so if you've avoided the show thus far, there's probably a good reason for it. However, I will try my best not to mention any spoilers if I can help it.

The first season follows two estranged brothers, Sam (Jared Padelecki) and Dean Winchester (Jensen Ackles), who reunite to search for their missing father. It's established that, because of a supernatural and unexplained occurrence that claimed the life of Sam and Dean's mother when they were children, the Winchester clan have dedicated their lives to investigating the paranormal and hunting the demons that dwell amongst us, some more unnoticed than others. In the years leading up to the pilot episode, Sam has broken away from his family to focus on his college education and live independently, but of course this changes when he gets news that pops is missing. Throughout the first season, they attempt to track down their father and, in the process, end up in a Monster of the Week scenario on a weekly basis by battling various demons, ghosts, monsters, and evil entities because they feel it's their obligation to do so. 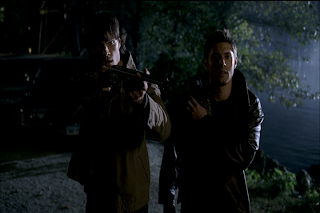 Unless otherwise noted, every episode is the same in structure and set-up: the brothers get a lead on a mysterious unexplained case in some random town, a road trip ensues, they investigate the area, they team up with a local (usually a physically-attractive female), and they clash with whatever it is they end up discovering, be it ghosts or monsters, etc., all while assuming false identities and easily obtaining information from the local authorities or organizations if need be. The suspension of disbelief is a necessity when watching SUPERNATURAL. In fact, it's best to just throw disbelief out the window, but I'll elaborate more on this throughout the rest of the week.

In the event that you check out my reviews and you haven't seen the show, just keep the previous paragraph in mind because I won't be getting too much into detail about each episode's plot. That's about it.