A college professor, played by Lauren Holly, accidentally unleashes a banshee through an ancient artifact she and her students discover hidden within the walls of their decrepit workspace. The banshee lets out a scream before seemingly disintegrating. The professor and her students survive the attack, but subsequently endure a number of intense hallucinations and suffer the side effects one would face when being exposed to such a deafening sound. Lauren Holly's character, thought circumstances I don't really need to elaborate on, traces the origins of the artifact to an a reclusive archaeologist played by Lance Henriksen, and spends a good amount of the film trying to track him down. All the while, the banshee, who's more or less an apparition, sporadically appears, terrorizing those who are exposed to its scream. 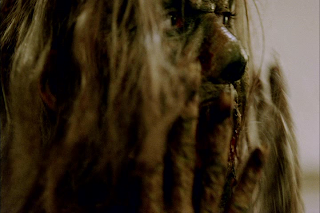 With the exception of a technical flaw in the form of a visible wire on a stuntman during the film's opening sequence, SCREAM OF THE BANSHEE starts out rather promising, showing indications of going in a supernatural slasher direction, and with a plot that moves quite nicely to boot. That is, until it collapses in the last thirty minutes and falls into the traps of a very conventional film in which the protagonists have to race against time to stop an unleashed monster and rectify a problem that they're responsible for. In the end, SCREAM OF THE BANSHEE is a film that lacks the teeth necessary to make it stand out amongst its peers, be it gore, scares, tension, atmosphere, dread, or even gratuitous nudity for fuck's sake. Adding insult to injury, some very unfortunate special effects towards the back end of the film expose its technical restraints and damn near ruin the film (watch out for the giant hand that comes out of the mirror). 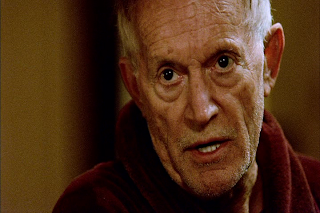 On the other hand, SCREAM OF THE BANSHEE has enough weird quirks that a lot of people may find amusing. The goofball character of the film, Otto, is straight out of an 80's slasher movie. The banshee looks like Mr. Boogedy. Eric F. Adam's character is obviously a flaming homosexual for no reason in particular. And, while it's not necessarily a quirk, Lance Henriksen is unbelievably creepy in this - not because of what he does or says, or because of Henriksen's performance, but because of certain traits the character possesses. For some reason Henriksen rocks a fat suit, wears an awful toupee, evidently paints his nails, and lives in a house full of mannequins. Why? No reason.