Feeling Generous? Lend a Shovel to the Creators of "86 Plots"

As most of you know, I don't really use The Death Rattle for the purpose of advertising unless I'm helping a friend out. A large percent of the e-mails I receive asking me to promote a website or a product end up getting deleted, but in this case, however, I decided to make an exception. Some of you may have gotten the exact same e-mail from a writer by the name of Colin Bryan, asking you to take a look at a Kickstarter page for a graphic novel he's working on called 86 PLOTS. For those of you who weren't contacted by him, Mr. Bryan and a team of writers and artists are trying to put together a graphic novel called 86 PLOTS, which consists of what looks to be a horror-related story in the vein of TEXAS CHAIN SAW MASSACRE. After checking out their Kickstarter page myself and previewing the first 21 pages, I was quite impressed and immediately knew that I wanted to be on board for promoting this project. 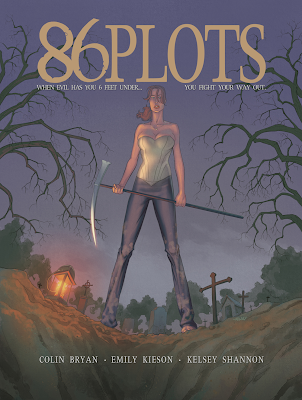 Instead of telling you all about it, click the links below to see for yourself and decide if you'd like to make a pledge on their Kickstarter page. If you aren't familiar with Kickstarter, it's an online site that specializes in helping people raise funds for various projects. If you make a pledge, it's simply that: a pledge, not a donation. Money will not be taken from you and considered a "donation" unless Colin and the team behind 86 PLOTS make their goal. The thing is, it won't be money wasted. Not only will you play a very important role in the creation of the graphic novel, but you'll be rewarded with prizes, depending on the amount of money you pledge - all of which are listed on the Kickstarter page. For example, if you pledge forty dollars, you'll get a signed copy of the graphic novel when it comes out; that's like the same price of what it will probably cost anyway!

An article on 86 PLOTS