Hello! This is the Doomed Show's 5 Rad and Like Totally Boss 80s Horror Chicks

Turns out both myself and Richard from Doomed Moviethon and Cinema Somnambulist are doing themes this month, with me doing Ladies' Month and Richard celebrating his birth year in film by covering movies from 1976, so we decided to do a little cross promotion. If you head over to Cinema Somnambulist RIGHT FUCKING NOW, you'll be able to see my top six list of genre films from my birth year, 1981. And instead of just asking Richard to do a post for The Death Rattle, his co-host of the awesome Hello! This is the Doomed Show podcast, Brad, decided to join in on the fun. The two of them put together a list of their five favorite 80's horror chicks. Without any further ado, enjoy the Double Duder action, and please check out their entertaining podcast. Click here to subscribe to the Doomed Show on iTunes. 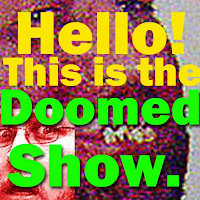 Richard: Aaron graciously asked Brad and me to come up with a list of something ladylike for a guest post during Ladies’ Month at The Death Rattle. We thought of final girls, villainesses, and quirky unsung chicks. Then we decided to do a list that was a combination of all three. 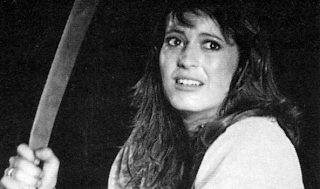 Robin Stille
Brad: Tall, leggy, and gorgeous. These are three words that I use to describe myself – oh and Robin Stille. Robin is literally the (excruciatingly non-naked) final girl next door in The Slumber Party Massacre. Sadly, she only appeared in two other genre films, Vampire Knights and Sorority Babes in the Slimeball Bowl-O-Rama, before rumored alcoholism and difficulty finding film roles caused her to take her own life at the tender age of 35.

Richard: It kills me that Stille didn't get more work and left us so young but she did leave me wanting more! She practically steals the film from her scream queen buds in Sorority Babes (another conspicuously non-nude role). 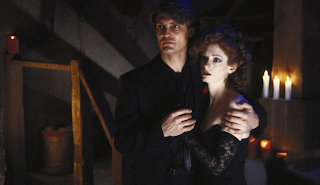 Lisa Pelikan
Richard: As a kid, I fell in love with the odd Lisa Pelikan when I caught Jennifer (1978) on late night TV in the 80s. However, I didn’t truly become a man (STOP SNICKERING!) until I beheld her in Ghoulies, one of the goofiest horror films of the 80s. This quirky redhead stole my heart once again as Rebecca, the hot girlfriend of Jonathan, the d-bag who summons all the mini-monsters. Lisa’s character is well written, sexy, and lovable, damn it! Pelikan continues to act in television but has yet to return to horror. 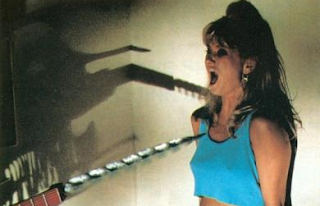 Heidi Kozak
Richard: Sally Burns is an amazing character in the incredibly fucked up and downright zany sequel that nobody wanted: Slumber Party Massacre II. Not only is she a totally badical drummer in a righteous all-girl band, she is also concerned with her skin. VERY CONCERNED. In a nightmarish and vomit-inducing sequence, Sally’s pore paranoia manifests itself into a giant pulsing pustule that erupts and splashes her friend Courtney. It is this moment that makes me tip my hat to the actress playing Sally: Heidi Kozak. Miss Kozak also played Sandra, one of Jason’s victims in Friday the 13th Part VII: The New Blood. It is in that film we get to see her pimple free bum and just about everything else. Unfortunately, Heidi’s last horror role is in the ultra-freaky Society (1989) where she plays Shauna, an over-the-top preppy cheerleader beyatch. 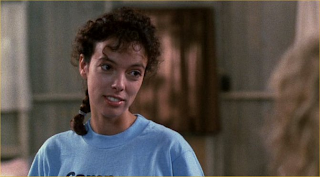 Pamela Springsteen
Richard: I knew absolutely nothing about the Sleepaway Camp sequels when I picked up the Sleepaway Camp Survival Kit. I sure as hell did not expect parts 2 and 3 to have such an amazing villainess. In the first two sequels, Pamela Springsteen plays Angela (that’s right, the man-girl of the first film all grown up), a psychotic camp counselor obsessed with summertime fun. She dispatches campers in all kinds of inventive ways while keeping her awesome can-do attitude throughout. Springsteen retired from the horror business and acting altogether in order to pursue a career in still photography. And seriously, is there anything more 80s than being Bruce Springsteen’s little sister? 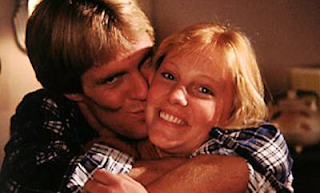 Amy Steel
Brad: I can't not pick Steel just because I know everyone else will pick her for their lists. Amy Steel abides. My favorite final girl in my favorite Friday The 13th film sadly only made one more horror appearance in 1986's April Fool’s Day. I love her, you love her, my grandmother loves her. Where did you go, Amy?

Richard: Very good choice, sir. Steel is a great final girl, for sure. I am definitely an Amy Steel admirer and for some reason, I dig April Fool’s Day more than Friday the 13th Part 2. It could just be that I need a break from the world of F13 for a little while.