When their parents temporarily leave to work for the circus in an attempt to make some money and hopefully save their marriage, sisters Sylvia and Jenny are left with a seemingly friendly woman in the neighborhood named Gertrude Baniszewski, who has a few daughters of her own. Gertrude's hard up for cash, so she offers to watch the girls in exchange for twenty dollars a week. Things start out fine enough for the girls as they get along with Gertrude's kids, but things take a turn when Sylvia accidentally outs the eldest daughter as being pregnant, which in turn causes the eldest Baniszewski sibling to cover it up and blame it on Sylvia's imagination. Frustrated by this, and also because she's stressing about finances, Gertrude takes it out on the girls; especially Sylvia, who accepts the punishment on behalf of her younger Polio-stricken sister. What starts out as a beating turns into Sylvia being locked in the basement as Gertrude snaps and even allows her children to repeatedly abuse and humiliate Sylvia for their own amusement. 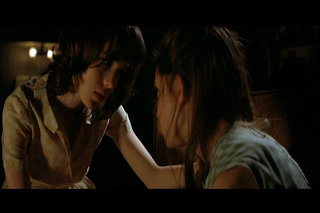 Have you seen (or read) Jack Ketchum's THE GIRL NEXT DOOR. Well, AN AMERICAN CRIME - a period film set in the 60's - is based on the true story that loosely inspired Ketchum's disturbing story of young girl who was locked up and tortured in the basement of a family who lived in her neighborhood. Based on actual testimonies and court transcripts from the case that saw single mother Gertrude Baniszewski convicted of first degree murder in 1966, AN AMERICAN CRIME premiered on the Showtime network and was nominated for various awards despite negative reviews. That being said, it goes without saying what the outcome of this story is.

Like Ketchum's GIRL NEXT DOOR (which I've both read and watched), AN AMERICAN CRIME is incredibly frustrating and a chore to get through, because you're basically just watching a single mother slowly losing her mind and a helpless young girl getting abused for about ninety minutes. That's pretty much it. On top of that, you have all of these supporting characters who you want to punch in the face for obvious reasons, and at the same time you want to knock some sense into the heads of certain characters who don't necessarily partake in the cruel proceedings but prove to be morons nonetheless when they refuse to go to the authorities. 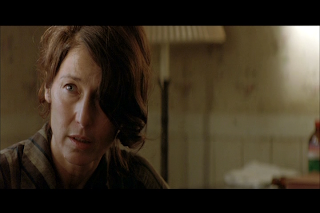 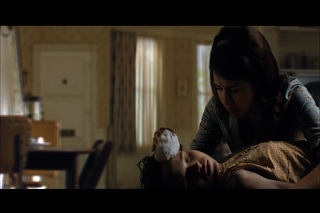 Prior to watching it, I had no idea what this movie was about, let alone that it was based on the same story that inspired Ketchum's GIRL NEXT DOOR, which I hated (both the book and the movie). Despite being made well aware of this as I watched the film and did some research less than twenty minutes into it, I bit the bullet and decided to watch it all the way through since I had already included this movie on a list of films that I want to cover. For what it's worth, I prefer this version of the story over Ketchum's - mainly because it's not as infuriating, but also because I feel it's a better-made film. Regardless, it's not a pleasant film, the true story, though tragic and incredibly sad, is tame compared to some of the shit you see in the news today, and it has zero re-watchability, unless of course you find entertainment in Ellen Page being tortured.