Remember that series of ZATOICHI reviews I had planned on doing like three or four months ago? Those of you who know me well enough are probably aware of the fact that I quickly lose interest in things, and such was the case with the ZATOICHI reviews; not because I didn't like the movies, but mainly because samurai films are just not my thing, and I typically don't feel comfortable reviewing movies that belong to genres I'm not overly familiar with. Before scrapping that idea, though, I had watched and took notes on the eleventh ZATOICHI film, and so I thought I'd go ahead and post a review of it. However, I will say that, while I didn't necessarily dislike this movie, it didn't really hold up in regards to how great the previous movies I had watched were, which sort of played a part in why I didn't continue watching the rest of them.

In case you didn't catch my previous ZATOICHI reviews, they're all pretty much the same as far as how they start out. Lead character, Zatoichi, is a masseuse, gambler, and master swordsman despite being blind. He roams around on his own throughout Japan and usually winds up in some sort of predicament and has to figure out a way to either get out of the situation or save the day, depending on the circumstances. ZATOICHI AND THE DOOMED MAN is no different. 'Ichi meets a goofy con artist after winning some money gambling, and the con artist offers to escort him to wherever he's going and hold on to the money for him. 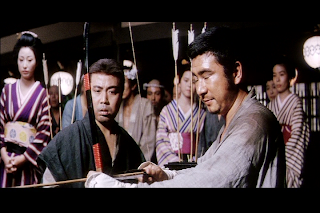 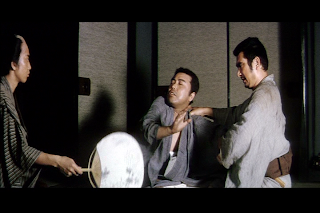 Even though 'Ichi's a profficient swordsman and more than capable of taking care of himself, an extra guy watching his back probably wouldn't hurt. Needless to say, the con man steals his money, but this doesn't necessarily act as the plot's driving force. Zatoichi somehow gets tangled up in some drama involving some powerful businessmen (the Yakuza, maybe?) trying to muscle some peasant out of his business and means of income. The con artist sub-plot merely provides for some comedic moments. Speaking of which, I'm not sure how I feel about "funny" Zatoichi. Personally, I love the drama and seriousness of the series thus far, as well as the crazy set-pieces and fight sequences that come with the territory. THE DOOMED MAN is a bit lighter than the previous entries in the series that I've seen, and it lacks a lot of the show-boaty stuff, if that makes any sense. 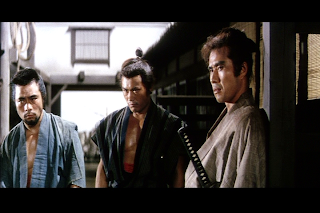 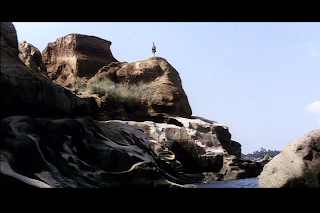 It's not to say, however, that I don't like THE DOOMED MAN. As I said, it pales in comparison to the previous ZATOICHI movies that I've had the pleasure of seeing (all three of them), but it's still worthwhile. You can pretty much always count on a phenomenal performance from lead actor Shintarô Katsu as Zatoichi, and in THE DOOMED MAN he doesn't disappoint. There are some noteworthy little moments in the film too, like 'Ichi hearing the ocean for the first time and some other moments that most would probably find touching. And, while I'm not very fond of the comedic elements, it doesn't mean the jokes fall flat or that the film's not funny, as there are some genuinely hilarious moments throughout. The relationship between Zatoichi and the con artist in general is quite amusing.