Poor HELLRAISER: REVELATIONS. This movie, which was one of the films that marked the return of Dimension Extreme, was met with much venom from the horror community before anyone even saw it, namely because of the fact that, for the first time since the first HELLRAISER movie in the late 80's, the character of Pinhead was played by someone other than Doug Bradley. I don't know the circumstances surrounding the re-casting of Pinhead, nor do I care, and I'd be lying if I said I wasn't one of the people who hated on this movie just on principle, but I decided to give this one a shot because my curiosity had gotten the better of me. Much to my surprise, it turned out to be not too bad. It's not great either, but it's certainly better than the last two or three HELLRAISER movies. Indeed, Doug Bradley as Pinhead is iconic, but Doug Bradley as Pinhead doesn't necessarily amount to a good movie. 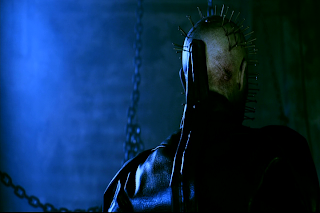 In REVELATIONS, two best friends go missing after a crazy trip to Mexico, leaving behind only a videotape of their drunken shenanigans. A year or so later, one of them suddenly turns up much to the shock of his family, but there's something a little "off" about him. Through the found footage and flashback scenes and whatnot, we get a better idea of what happened to the two friends in Mexico and why the went missing (hint: it has something to do with the Lament Configuration and opening the doorway to Hell), as well as brief glimpses of the brand new Pinhead. Needless to say, for reasons that are explained in the film, Pinhead and the Cenobites show up and all Hell breaks loose. 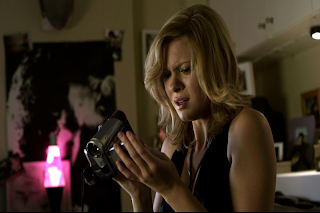 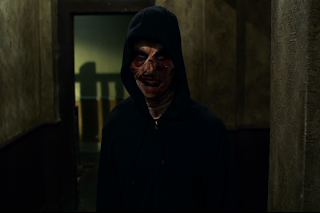 What's interesting about this movie is that it stays pretty close to the structure of the first two HELLRAISER movies, in that it goes back to the basics and doesn't really come up with some sort of complicated and creative way to feature Pinhead. I mean, after all, one of the main reasons we watch these movies is to see Pinhead and the rest of the Cenobites fuck some shit up, so it doesn't really bother me that this film took a somewhat familiar route as a means of getting there. Without spoiling anything and explaining why I think this, there are some noteworthy similarities between the two best friends, Nico and Steve, and Julie and Frank from the original HELLRAISER. At a certain point in the film, Steven is clearly the Julie to Nico's Frank (if that makes any sense), in that he becomes an enabler of sorts. While REVELATIONS falls short in certain areas, that aspect of the characters is quite interesting and well done.

Getting back to Pinhead, or rather the controversy surrounding Pinhead's re-casting, it's obviously a surprise that Doug Bradley had to step down for whatever reason, but at the end of the day it doesn't really bother me as much as it does the horror "fanboys" out there. Again, I just want to see the Cenobites tear a bunch of stupid people to shreds, and I'm a happy camper as long as that's delivered. But, if I do have a problem with Neo-Pinhead, it's that the actor who plays him - though good - has very strong facial features, whereas Doug Bradley had a very neutral look while underneath the make-up. It might be nit-picky on my part, but it just looks kinda weird to me. Aside from that, I thought Pinhead was fine, and I was quite intrigued by the addition of a new Cenobite who looked identical to Pinhead, except with nails piercing his skull (Nailhead?). 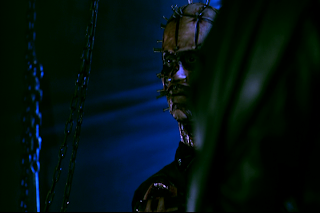 Depending on how you look at it, REVELATIONS is an interesting attempt at injecting some life back into the HELLRAISER series, or a decent film despite being another shameless cash-in on Dimension's part (although, considering they own the rights, I can't really fault them for trying to make some money). The highlights for me are the decent amount of gore, the quick pacing, and the overall look of the film. It is a weak film in some crucial areas, though, namely the script, the acting (specifically the scenery-chewer who plays the recurring HELLRAISER hobo character), certain things in the plot that just don't add up, and the film's climax feeling a little rushed. People are certainly entitled to say whatever they want about this movie, but one thing you can't take away from it is that it's not boring.