The father of a small-town family discovers a feral woman in the woods while hunting, and so he does what anyone in that situation would do by knocking her unconscious and subsequently tying her up in the basement. In all seriousness, the father, Chris Cleek, abducts the mysterious feral woman, holds her captive, and proudly displays her to the rest of the family as if it weren't a big deal. His intentions are to tame her and teach her manners, but his sadistic side gradually reveals itself, resulting in some rather disturbing scenes and a generally uncomfortable tone throughout the film. 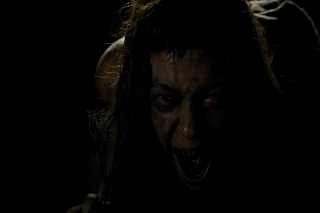 THE WOMAN takes place in modern times, but yet the family is very atomic-age in terms of their behavior, appearance, and how they're structured. Chris, for instance, is the bread-winner and dominant figure in the household. For the most part, he has gosh golly nice-guy mannerisms, but it's made clear that it's merely a facade for the fact that he's a monster. His wife, Belle, is very subservient, and their oldest children, Peggy and Brian, are polar opposites of each other; Peggy is a socially-retarded teenager, and Brian, well, he's just a creepy little bastard. The youngest child, Darlin', seems to be the only normal one in the bunch. When dad reveals the feral woman to the family for the first time, their reactions to the unexpected sight speaks volumes in regards to their personalities. Especially when it comes to Brian, whose eyes light up when he sees the eponymous "Woman". You just know something's gonna happen between the two of them at some point, and seeing as this is partly a product of author Jack Ketchum's imagination, the twisted possibilities are endless.

Since its debut, THE WOMAN has been met with a fair bit of criticism from people in and out of the horror community. At its world premiere at the Sundance Film Festival last year, an upset viewer made a scene at the screening, essentially referring to the movie as a misogynist piece of cinema with no redeeming value. His rant, of course, was captured on video, uploaded to the internet, and even featured on the DVD release. At face value, THE WOMAN is indeed misogynist, but I have to wonder if the aforementioned critic actually sat through the entire film, because in all actuality it's far from being an anti-woman film. If anything, THE WOMAN is ultimately about female empowerment. The elements of misogyny are there, but they're at the expense of the male characters who are made to look like monsters. 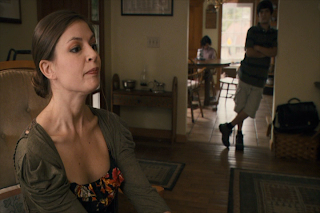 "The Woman" - a character that first appeared in 2009's OFFSPRING - is oppressed throughout most of the film; had she remained that way for the entire duration of the film, or fatally succumbed to her inhumane treatment, then maybe one could argue that director Lucky McKee produced a sick masturbatory fantasy of the torture-porn variety, but the fact that she - (and this is not a huge spoiler since it's fairly obvious what will inevitably happen; a spoiler would be telling you what happens to who and HOW it happens) - eventually gets loose and reacts to her surroundings in a way that an uncivilized feral woman would naturally see fit, it's representative of a liberation. A woman's liberation, if you will.

All pretentiousness aside, I found THE WOMAN to be an incredible film and arguably Lucky McKee's best directorial effort thus far. I've heard it referred to as "boring", and I won't argue that it meanders and it's a pretty uneventful film at times, but such is usually the case with a movie that's more character-driven than plot-driven. I'd even go so far as to say that calling THE WOMAN a "horror movie" would be unfair. It's more of a dysfunctional family drama in which said family just so happens to have a woman locked up in their basement - a woman that acts as a catalyst for crumbling of the family's foundations. The final moments of THE WOMAN, however, are undeniably horror. As far as the film's family aspect, the Cleek family are so dysfunctional that it borders on comedic more often than not; darkly comedic, but funny nonetheless. 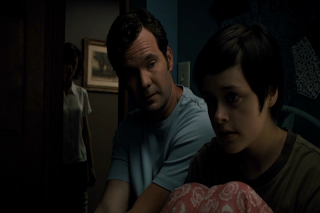 THE WOMAN is also impressive on a cinematic level. It's not a flashy movie by any means, but there's some impressive camera work and an excellent use of sound (or lack thereof) overall. The score by singer-songwriter and first-time composer Sean Spillane is great as well and one of the film's highlights for me. Most of the soundtrack consists of actual songs written and performed by Spillane (including some very odd choices as far as where they're placed in the film), but there are a few actual compositions per se, one of which is a haunting synth number layered with eerie sound effects. I could go on about the movie, but I think I've rambled long enough. When it was all said and done, THE WOMAN was pretty much what I expected in some respects, but as a whole it truly impressed me in a way that very few "horror" movies have done in the last few years. It's incredibly tense at times and just plain fucking weird for the most part. Best horror movie of 2011? Perhaps.