A young woman trapped underground, her brother who's trying to set her free, two cops, four friends on a road trip, a blue-collar type of guy and his dog, and what I can only describe as a working-class serial killer. The paths of these people (and dog) somehow cross in a forest littered with bear traps and old landmines, but not in ways that you'd expect once the stage is set in this darkly comedic Israeli horror movie. RABIES is kinda like a botched crime movie, except the crime here is the movie itself, and by no means is that an insult to the film on my part. You see, in certain horror movies, things are just supposed to happen and we as viewers aren't supposed to question them; sure, it's in our nature to question them anyway, but there's a formula that horror movies follow that we've come to accept for the most part, and it seems that everything has to fall into place for them to work. Well, RABIES is a horror movie where the design is constantly interrupted by its own characters, as if it was supposed to be your typical stalk n' slash type of movie until a mischievous puppeteer showed up, reorganized everything, and created a sense of disorder for his own amusement. 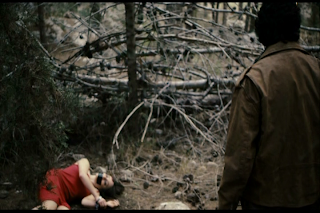 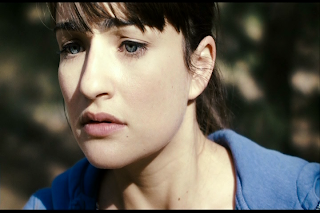 RABIES is a tricky movie to talk about without spoiling anything. There isn't some big revelation in the film or anything like that, but the manner in which the plot unfolds beyond a certain point is the surprise. I guess you could say that the turning point of the film comes early, and it's when the group of friends I mentioned earlier accidentally hit someone with their car. One of the clever things that the film does before giving you an idea of what it's all about is that, quite simply, it scares the shit out of you. There are at least two or three very effective jump scares in the first twenty minutes, and even if I told you where they were and when to expect them, I can pretty much guarantee that they'd still get you. And what's great about the jump scares is that they're not cheap; they're the result of misdirection and a great use of music and sound. Speaking of which, while the music in the film isn't particularly outstanding, it's used to great effect throughout - not just with the jump scares, but to create tension and also to play with the viewers' expectations.

Aside from the film itself and the design of the plot, even the characters are full of surprises because, again, they're written to go against the grain of the traditional horror movie. That's about all I can say as far as that's concerned. Also, despite being only ninety minutes long and featuring more than a handful of central characters, by the time RABIES was over I felt like I knew so much about all of them, and this goes back to the writing and how the filmmakers took the time to develop the characters despite all the insanity going on. As far as the cast, I thought they were all pretty good and, personally, it's kind of refreshing to see a horror movie of this quality starring a bunch of people I'm not familiar with. Despite the language barrier, I could feel their performances. The only person I had an issue with was actor Danny Geva, who played one of the cops. I felt he took it a little too over the top, but, for reasons that you'll see when watching the film, his character is not supposed to be a likable one, so I suppose he succeeded at what he was trying to do. 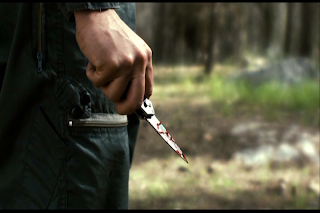 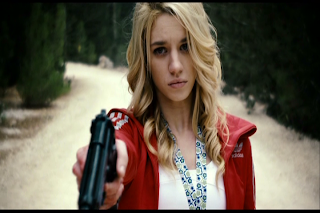 Even though RABIES technically debuted in North America last year, it only hit DVD and became widely available this year, and so I'm counting it as a movie from this year. That being said, the timing of RABIES makes me really excited as a horror fan, especially in a year when CABIN IN THE WOODS came out and blew peoples' minds by turning the horror genre on its ear in a fun way. Even to a lesser extent, the upcoming found-footage horror movie EVIDENCE, which I'll talk about once it's actually released, does something similar. People can moan and groan about remakes all they want, but films like RABIES make me relieved to know that there are filmmakers out there who are clever enough to take liberties with the horror genre and have fun with it. RABIES isn't a game-changer by any means, and quite frankly I probably won't watch it again for a while, but it's fun and is worth going out of your way to see, especially if you've found yourself bored with the horror genre as of late.