Directed by Leif Jonker. Starring no one you know. Not Rated. Body Count: Exact number unknown; 26 on-screen kills and a large group of vampires who get fried by the sun. Exploding Heads: 10.

DARKNESS: THE VAMPIRE VERSION (yes, that's what it's called) was recommended to me by a couple of members of the Death Rattle Facebook Group when I posted a link to an old review of Jim VanBebber's DEADBEAT AT DAWN. Both movies are very similar in a lot of ways despite not having anything to do with each other in terms of content. Both are independent movies made by amateur filmmakers and are similar in spirit. In this film's case, director Leif Jonker got a group of his friends together and hired a bunch of young non-actors who were looking to star in a movie, and they worked hard to complete an ambitious project. Like DEADBEAT, DARKNESS makes up for its lack of budget and resources with heart and enthusiasm. But that doesn't necessarily mean it's good. Or does it?! 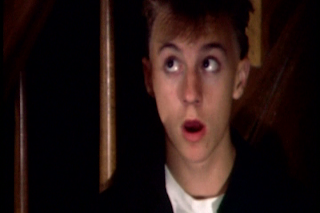 First I should clarify the whole "Vampire Version" thing. Leif Jonker originally shot a movie called DARKNESS in 1991 on a budget of approximately five-thousand dollars and later tweaked it into the Vampire Version. Both movies are basically the same thing, but the original version has narration from its lead character and some extra dialogue. Otherwise, it's the same footage, the same actors, and the original is still a vampire movie. With that out of the way, DARKNESS is basically a vampire apocalypse film, and it did something back then that movies, comics, and television shows like 28 DAYS LATER and THE WALKING DEAD are doing today, but obviously on a much lesser scale. However, the army of vampires in the film resemble zombies more than they do actual vampires. 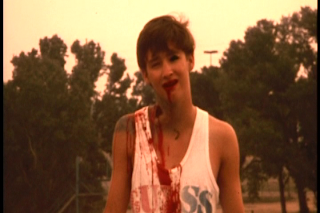 The vampire apocalypse in the film begins suddenly when the lead vampire attacks a few people and it triggers a chain reaction of outbreaks. A group of survivors (all teenagers) band together as they're led by a guy who looks like a young Trey Parker but sounds like The Undertaker when he talks. Speaking of which, it seems like this movie exists in a world where there are only teens. There are no adults in sight, and the ones we do see are dead. There are a couple of "adult" roles, but they're played by people who can't be older than 18 or 19, which is both funny and awesome at the same time. The lead vampire looks like he could be the younger brother of Kiefer Sutherland's character from THE LOST BOYS, and the extras look like they were on their way to a Pantera concert but got in a car accident. 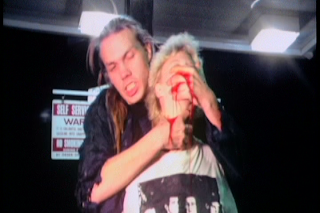 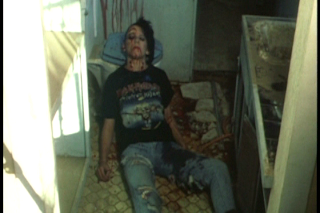 DARKNESS is wonderfully dated. It's so fucking late 80's/early 90's it hurts. I noticed a couple of REAL THING-era Mike Patton haircuts (long on top and shaved on the sides), some great mullets, and there are Iron Maiden t-shirts galore. The film as a whole is like HEAVY METAL PARKING LOT meets THE WALKING DEAD. This is a great time capsule if anything. The vampire thing is pretty inconsistent, though, and I'm not sure why the director just didn't go a different route and make it a zombie movie. The lead vampire is probably the only character who resembles a traditional vampire. He sleeps in the dirt, which is a nice touch, and he only comes out when the sun sets, but the other vampires are out during the day. There are constantly countdowns and title cards throughout the film that give the viewer an idea of what time it's supposed to be and how much longer it is before dusk and dawn, but yet we see the vampires out when there's daylight. If Jonker was trying to do some kinda day-for-night thing, he didn't do a convincing job.

Another inconsistency takes place during what's known as "The Meltdown", which is a notorious sequence in the film that showcases many of the impressive gore effects. It's basically a bunch of exploding heads and melting faces backed by a symphony of screaming. It's suggested that the "Meltdown" is taking place and vampires are exploding because they're being exposed to sunlight, but it doesn't appear to be much brighter than it was prior to this sequence when they're chasing the protagonists next to a busy freeway occupied by motorists who are appraently oblivious to the fact that there's a vampire outbreak. The inconsistencies with the vampires aren't necessarily a criticism so much as they're an observation and something that could potentially be confusing for some people. DARKNESS is apparently known (or at least it's self-advertised as such) for having the most exploding heads in a single film, but, as you can see in the credits section of this review, I kept a tally and only counted ten exploding heads. (It's a tough job, but somebody's gotta do it.) 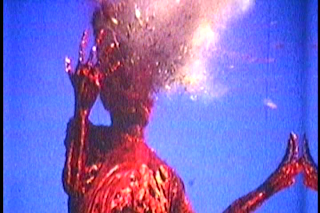 If I were to rate this movie based on gore and ambition, it would get a 9 or a 10. The gore and makeup effects obviously aren't great by mainstream standards, but they're impressive for an indie movie are are up there with some of the best DIY effects of all time next to Peter Jackson's BAD TASTE. With that being said, it felt to me like the gore was just an added bonus, and the plot didn't necessarily come across as being there for the sake of getting from one gory set-piece to the next. As a whole, for comparison's sake, I prefer DEADBEAT AT DAWN because of how ambitious it is and how seriously it's presented in spite of its own ridiculousness, but, given its resources, I think Leif Jonker achieved much more with DARKNESS in terms of what he was trying to do. Yes, the acting is very amateur and Jonker isn't the best storyteller in the world, but it's remarkable when you take everything into consideration.