Unlike every other Death Rattle Double Feature I've done thus far, this one wasn't premeditated. It actually stemmed from a viewing of MEDIUM RAW: NIGHT OF THE WOLF, which I was planning on reviewing solo. As I watched it, I noticed that it was very similar to a French horror movie I saw a few years ago called DEEP IN THE WOODS, which I reviewed on my old blog when I did a themed month dedicated to Fairytalesploitation. Both of the films I'm reviewing this week are slasher movies that aren't necessarily based on Little Red Riding Hood but are greatly inspired by the classic fairytale and feature some very obvious homages to it, and both also feature killers in crazy-looking wolf costumes.

I knew nothing about MEDIUM RAW: NIGHT OF THE WOLF prior to seeing it and was simply attracted to it because of its interesting title. Turns out it's a Canadian production and some of the people involved with it are also part of the DARK RISING series, which apparently is a thing in Canada and features involvement from certain native pro-wrestlers, like Christian from WWE and Angelina Love from TNA. My only familiarity with DARK RISING at this point is the first feature-length film, which is sort of a comedic monster movie in the vein of JACK BROOKS with a time-travel twist. While I wasn't a huge fan of DARK RISING, I really got the sense that the people involved tried their hardest and were passionate about it. Judging by the some of the same key people turning up in this movie, it's apparent that there's a network of young actors and filmmakers from Canada who enjoy working together and producing horror-based films, which is admirable. 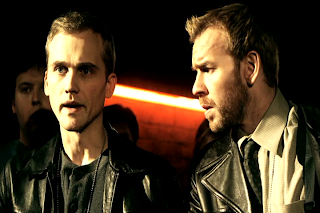 Most of MEDIUM RAW is set in an asylum and takes place in the wake of an elusive child-murderer named Harold Grierson being captured. Grierson has apparently been active for decades, kidnapping children and leaving behind the same signature which reads: "Are you the Woodcutter?" One of the film's lead characters, Johnny Morgan, is a detective who has a personal investment in Grierson's case. When he was a kid, his sister was kidnapped by Grierson, which drove him to become a cop and dedicate his life to solving the crime. Without getting into too much details, Morgan finds himself at the asylum on the night of a power outage with an assortment of other characters: his partner (played by pro-wrestler Christian), his ex-girlfriend Jamie, who works at the asylum, Grierson's lawyer, who looks like a blonde, BAYWATCH version of Gillian Anderson, and a few other people, including some old lady and her granddaughter, who happens to be wearing in a red hoodie. 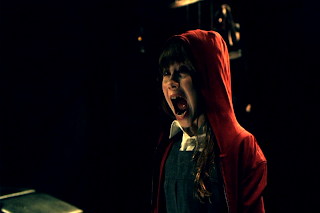 As the power to the asylum goes out and the back-up generator kicks in, the security system malfunctions and allows the numerous inmates to be freed from their cells. Bedlam ensues and the protagonists find themselves trapped and struggling to survive as someone dressed in Grierson's wolf costume (which should be locked up in an evidence room somewhere) goes on a murderous rampage. It should be said, though, that most of the inmates are harmless and are just weirdos who wanna do their own thing. One guy is apparently locked up for having an extreme foot fetish and there are others who have mental disorders of some sort, but there are a few inmates who are clearly dangerous. One of them is a jacked-up monster (played by another pro-wreslter, the late Andrew "Test" Martin) who gets uncontrollably angry when he sees the color red, and another is a cannibal and is by far the most disturbing character in the movie. 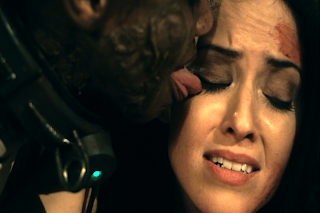 MEDIUM RAW kinda feels like an extended season finale of a horror-based television show like SUPERNATURAL or GRIMM or something along those lines, and I say this because of the characters, the random young actors and pretty faces, and the mythology that's sort of set up. I also say that because of the obvious fairytale references, which is something that the shows I previously mentioned have done interesting things with in the past. The fairytale references are cool, and I have a thing for dark fairytale interpretations in films or television, but they don't really make a lot of sense in MEDIUM RAW and are seemingly just there for added effect. In other words, it feels like the film isn't so much built around any fairytales as it is a simple slasher premise with a bunch of contrived references sprinkled throughout. 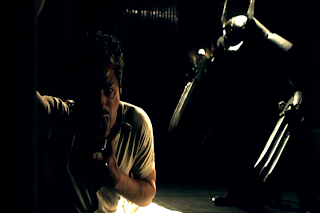 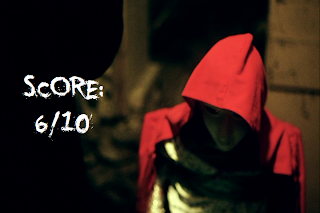 Things don't get particularly interesting until the power in the asylum goes out, but that doesn't happen until almost an hour into the movie. Before that is tons of set-up, some of which isn't needed. The film has a habit of introducing something, setting it up, and going nowhere with it or paying it off in an anti-climactic manner, which is unfortunately a trend that continues well into the power outage. We do get some good pay-offs during the power outage in terms of the film's slasher element, but in general it's underwhelming in a lot of ways. There should be psychos running around the asylum and it's not the case at all. I mean, they're all finally free and have an opportunity to escape, but instead they either hang around long enough to get killed by the "Big Bad Wolf" or just sit in their cells. On the other hand, I also appreciate the diversity of the characters (both protagonists and inmates alike) and how ambitious the filmmakers were in that respect. On the plus side, the wolf costume looks awesome and the film in general looks fantastic. But, like I said, it feels like a television season finale that's presented out of context.

As I said earlier, DEEP IN THE WOODS is a movie I first saw years ago and was a big fan of at the time for whatever reason. It's about a troupe of actors in their early twenties who are hired by a reclusive man to entertain his son, Nicholas, on his birthday. To call Nicholas eccentric would be a huge understatement. He's a mute and he does the most random shit that defies mental illness. He seems more like a robot who keeps malfunctioning. Things get super weird for the actors on their first night at the secluded home of the older man and his son, but they stay anyway despite the numerous red flags. They received news of a serial rapist on the loose, and it's not long before they're all preyed on by someone who's wearing the wolf costume that they used for their performance of Little Red Riding Hood. Whether or not the wolf and the rapist are the same person isn't made clear at first, so initially there's the potential of the characters being threatened by two different people. 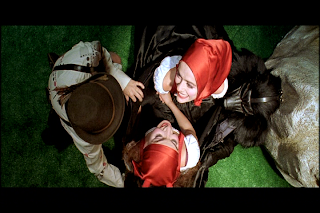 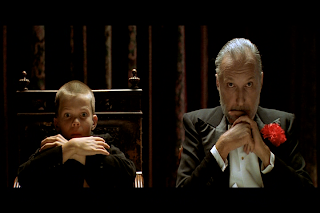 Early on, as evidenced through a flashback scene of a woman being strangled by a black-gloved killer and because of the style of the film itself, it seems that DEEP IN THE WOODS is inspired by Gialli. This is something I noticed on my initial viewing years ago and it's something that's still clear to me this time around. The film isn't a full-blown Giallo homage or anything, but there are a lot of similarities in style and how certain scenes are filmed. This is the case at first anyway. Before long it turns into just a regular slasher, albeit a very stylish one. 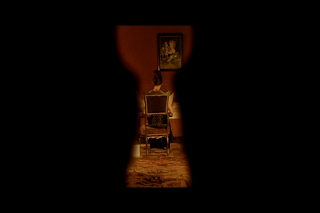 The set-up for DEEP IN THE WOODS is pretty simple and it plays out as a very conventional slasher film. The characters are put into a situation where they're out of their comfort zone, some creepy and suspicious people come into the picture and disappear for a portion of the film, and it turns into a "Ten Little Indians" kinda thing where the characters are menaced and are gradually eliminated from the picture. It should be said that the lead characters who we're theoretically supposed to be rooting for are a bunch of morons and deserve what's coming to them, but one could also argue that they're just acting like young people who don't know any better. Whatever the case, they're awful houseguests. It seems like they're just looking for trouble throughout the film and are begging for something terrible to happen to them. You'd figure they would be exhausted on their first night after traveling what seems like a long distance all day and performing for their hosts, but, in keeping with the Little Red Riding Hood theme, they end up doing stupid shit like wandering around the woods at night and putting themselves in harm's way. 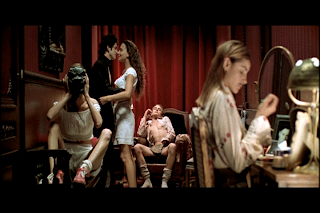 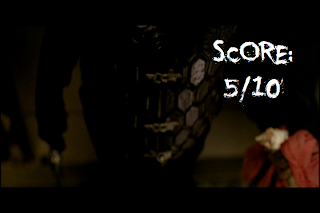 The kills are forgettable and fairly simple, and the characters aren't easy to invest in because of how dumb they are, but the style of the film makes it worthwhile, and it's an interesting take on the Little Red Riding Hood story overall. The wolf costume is also pretty awesome and it might be one of my favorite slasher get-ups now that I think about it. Another thing I'll give the movie credit for is how it portrays the Final Girl as a possible suspect, which is something that I don't recall ever seeing in a slasher movie. DEEP IN THE WOODS, as I mentioned earlier, is very stylish, but it's also extremely boring and not nearly as interesting on a re-watch. That said, I'd recommend giving it a shot if you haven't seen it before. Maybe rent it or stream it if those options are available to you, but, as I found out, it's not a very re-watchable movie.