Gary Busey has a reputation of being a loudmouth and a strange dude, so it's fitting that, in CARNY, he plays a clown who sits in a dunk tank and spends his nights insulting people as one of the many interesting characters who travels from town to town with a circus. His best friend Patch is the guy who hustles people and lures in "marks", but he's also the person who handles a lot of the daily business operations behind the scenes. 18 year-old Donna, who's fed up with her jock boyfriend and small-town life, eventually comes into the picture and decides to join Frankie and the rest of the crew as part of the traveling circus. As Donna tries to prove herself by learning the ropes and showing she has what it takes to be a carny, tension mounts between Frankie and Patch, and some corrupt authority figures threaten the existence of the group of circus performers. 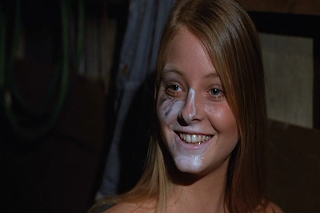 What I just described could be interpreted as this being a save-the-rec-center kind of movie with a bunch of silly, likable characters, but CARNY is actually a serious film that almost plays out like a blue collar, Americana version of FREAKS combined with a Road Movie. And I don't mean FREAKS in the sense that it's a horror film that puts an emphasis on a lot of the sideshow performers, but rather that it pulls the curtain back to reveal a dark side of the circus. For people that go to them, the circus means bright lights, rides, and games, but this movie exposes the side of the circus that you typically don't see: the rigged games, the hustling, so on and so forth. But, on the other hand, you also get to see the camaraderie between the circus performers and how they all work together to go from town to town and make enough money to keep their operation going. For some of these people, the circus is all they have, and the film does a good job of making that a point. 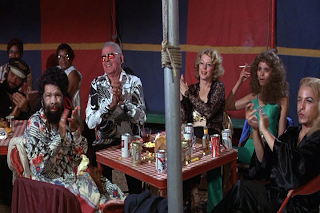 It's not to say, though, that CARNY is just some big expose on the circus and nothing more. At times it's about the circus itself, but for the most part the circus is merely a backdrop for the character relationships, and it eventually turns into somewhat of a gritty drama before coming full circle and ending on a fairly lighthearted note. As I sort of mentioned earlier, there's also a balance between the hustling aspect and the carnies trying to run a legit business. 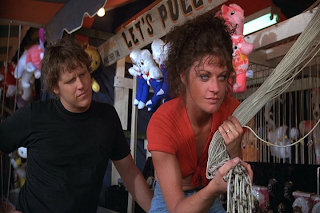 CARNY, for some reason, has remained a fairly obscure film for a number of years. It never got a proper DVD release, but now it's available through Warner Archives. That being said, I had never even heard of it until last year or the year before when Brian from Rupert Pupkin Speaks mentioned it in one of his posts. Other than maybe rights issues, I can't see why this would have been buried in obscurity for so long; it's an interesting oddity of a film with a great cast. Gary Busey is his usual unhinged self in this, but he's also very charismatic and a natural alpha male, which makes him the perfect casting choice for a clown whose job is to basically make people angry but, most importantly, keep their attention. Jodie Foster, by this point, already had a breakthrough role years earlier in TAXI DRIVER, but she still looks really young (and cute) in this and she plays an essential character. 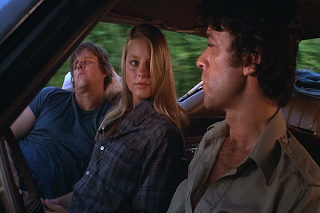 As a whole, I don't think CARNY is a great film, but it has moments that I love. For one, I love the circus and sideshow setting; not just the look and the great aesthetic that it provides, but because of the inherent camaraderie and family atmosphere amongst the characters. There's also a great part in the film where the circus closes one night because of a storm, so the performers and workers throw a big party in one of the tents. The character interactions during those scenes pretty much sum up what I love about seeing camaraderie amongst large groups of people in films, whether it be circus performers, blue collar workers trying to make ends meet, soldiers who fight together in war, so on and so forth. Ultimately, it's the slow pace of the film, the overall familiarity of the plot's structure, and the annoying music that drags CARNY down a point or two for me, but I'd still recommend it as a curiosity viewing and I think it's something worth having in your collection if it sounds like it would be up your alley.