It seems that a new generation of genre filmmakers is upon us, and I'm not talking about "The Splat Pack", but rather the offspring of some of our most beloved genre directors, more specifically the sons of George Romero, David Cronenberg, and George Cosmatos. In a way I sort of feel bad for them because they could potentially be overshadowed by the legacies of their fathers for years to come. Part of me thinks that they should be judged on their own merits and not how good their fathers were (and, arguably, still are), but by dabbling in what your father has already done and trying to carry the torch, you're immediately setting yourself up for comparisons. Fortunately for Panos Cosmatos, he seems to be on an entirely different level of filmmaking than his father, as evidenced by his directorial debut and the first movie I'll be reviewing in this Double Feature. I thought it would be cool to not necessarily compare and contrast the films of George and Panos, but to showcase what each brings to the table.

BEYOND THE BLACK RAINBOW is one that I'd been highly anticipating regardless of who directed it. The initial stills that surfaced online a while back looked stunning and evoked mental images of SUSPIRIA in outer space. Strangely, even though it's set in the 80's (and not in outer space), the film takes place in an extremely futuristic-looking facility that houses at least one human test subject and a skeleton crew of employees. It's suggested that there's a lot going on within the walls of this monolithic facility, but all we really see are a teenage girl named Elena, who's seemingly being held there against her will and monitored by a mysterious and rather eccentric character named Barry. 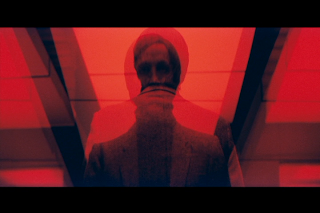 As a nod to a trend that was popular in the 80's (which may or may not have been coincidental), Elena has telepathy. She's kept in a fancy-looking room while Barry watches and communicates with her, but what he's trying to achieve in his apparent testings are beyond me; judging by how evidently style-over-substance this movie is, it's probably something that only director Panos Cosmatos can answer. For the most part, Elena doesn't really do anything except look sad and occasionally have an epileptic episode where her telepathy acts up. There are some developments regarding her character's history, but the answers are vague at best. That being said, I don't know much about the actress who played Elena, but I assume this was an easy gig for her considering she doesn't say anything and doesn't particularly emote anything except for sadness. 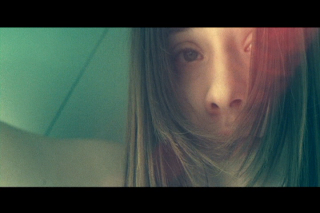 The film eventually takes a big turn as far as the plot and how a certain character evolves, but for me to sit here and try to find meaning in the film is sort of missing the point. BEYOND THE BLACK RAINBOW, like AMER from a couple of years ago, is an homage of sorts to a specific period of cinema and an exercise in visuals and sound. If you look at it from that perspective, BEYOND THE BLACK RAINBOW is phenomenal and contains some of the most amazing visuals you will ever see in a film. My only gripes with the visuals, though, is that they aren't completely justified and are just there for the sake of crazy visuals, and, at times, the editing and camera shots are distractingly similar to that of other filmmakers. 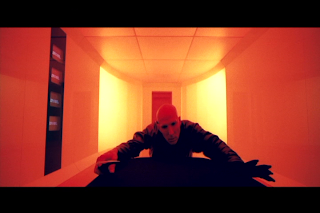 Aside from the visuals, the soundscape is also quite good and perfectly compliments the imagery. The score is heavy on the synths and sounds like it's lifted straight from an 80's movie. Speaking of which, Panos really nails the cinematic mood and look of the late 70's and early 80's, be it through certain props and the general aesthetic, to the artificial vintage look of the film that a lot of Neo-Exploitation movies adopted post-GRINDHOUSE. At one point there's an extended acid trip sequence that doesn't really make sense as to why it's in the movie, but, like everything else, it looks awesome and even features what appears to be rotoscoping. On a side note that goes back to the visuals anyway, it looks like an obsessive compulsive germophobe would be right at home in this movie; everything looks incredibly clean and meticulously positioned in a way that's hard to put into words. 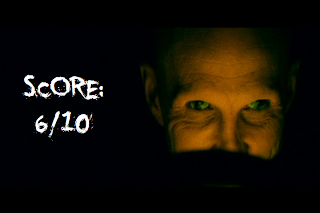 At the end of the day, BEYOND THE BLACK RAINBOW is an easy movie to make fun of and spoof despite it bringing a lot to the table visually and sonically. It's an "experience" and it's first and foremost an art film, so it's inherently bizarre, pretentious, and not very accessible to most people. Like all art films, this is a divisive one and it's only as good as you want it to be; you'll either get something out of this movie or you won't. Plain and simple. As for me, I do appreciate the visuals, but other than that I got nothing out of it and it left me feeling unsatisfied by the time it was over. To me, it was trying to evoke a certain mood and state of mental awareness that I couldn't get on board with. If the film's goal was to make me sleepy, then it succeeded. But, as someone who doesn't partake in the use of hallucinogenic drugs, I feel that, as a viewer, I'm automatically isolated by this extremely psychedelic film and am not in a position to "get it". Even though AMER was just as pretentious, I appreciated it much more because it gave me something I could latch onto (that being the fact that it pays tribute to a genre I love), whereas BEYOND THE BLACK RAINBOW did very little for me. Regardless, Panos Cosmatos creates a fascinating world in this film and I certainly wouldn't discourage anyone from seeing it for the simple fact that art is subjective.

As for the elder Cosmatos, I had a hard time deciding what movie of his to cover. As evidened by BEYOND THE BLACK RAINBOW, Panos and George are drastically different in terms of filmmaking, and while George made some great movies, I wouldn't go so far as to call him an auteur. To me, George seemed like a reliable director-for-hire who could get the job done. His output was also varied in terms of genres and styles, so it became a matter of availability as far as picking a movie of his to review rather than what I feel perfectly represents him as a director. I originally intended to go with OF UNKNOWN ORIGIN, but I went with LEVIATHAN instead, which sees Buckaroo Banzai himself, Peter Weller, leading an underwater expedition team as they mine for silver and eventually encounter a deadly creature that wants to kill the shit out of them. 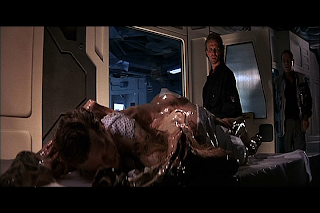 LEVIATHAN, which is basically an underwater version of ALIEN, is a movie that I actually saw in the theater at a young age and haven't revisited until now. I had a hard time taking notes on this movie and I still don't really know what to say about it. As I said, it bares many similarities to ALIEN and other movies of that sort. You have a very blue-collar group of characters who have stupid nicknames and are clearly varied in terms of backgrounds and personalities. Peter Weller plays the captain of the underwater base and is in charge of the ragtag group of miners. It's established that they've all been underwater for quite a while and that they're only a few days away from completing their mission when the movie starts. Throughout the film, Weller communicates with Meg Foster's character via satellite, and she's representative of the greedy corporate entity that hovers over the working-class group of people who get their hands dirty and do all the work. 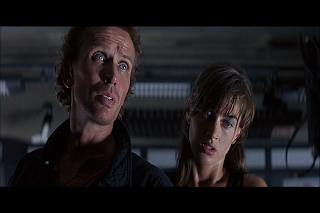 Amongst the cast, we have Ernie Hudson, who plays one of the more reliable and trustworthy characters, and Daniel Stern, who plays an obnoxious douchebag with very little redeeming qualities, if any. Stern plays the type of character who you can't wait to see die a horrible death and eliminated from the picture as quickly as possible. Amanda Pays provides some nice eye candy. Aside from them, there are a few other actors who most of you will probably recognize, but no one worth going out of my way to talk about. The group of characters were one of the weakest things about the film in my opinion, because there were times where I could have cared less who lived or died once the shit hit the fan. Speaking of fans being hitted by shit, LEVIATHAN is also comparable to John Carpenter's THE THING, in that we get some very similar moments of Body Horror that stem from sort of virus or parasite. 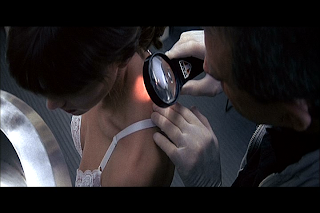 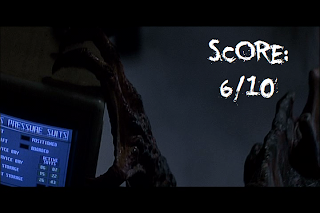 LEVIATHAN is a perfectly decent horror movie, but it's also one of those "Why bother?" kinda movies. Why watch a copy when you can just go back and watch the real thing instead? Aside from the underwater setting and Peter Weller in the lead role, this film doesn't bring much to the table that ALIEN and THE THING and other similar survival-horror movies of that era haven't already done. For some people, I can see Peter Weller being a draw back then and even now. I consider myself a fan of his and he's definitely one of the things that keeps this movie afloat (no pun intended). But, in terms of what it tries to do as a horror movie, it's decent and, to be fair, it provides an alternative setting for a familiar scenario, but it's far from exceptional and it's pretty boring at times. At least the underwater scenes look good and the interior sets are impressive, and the film is indeed gross in spots because of the Body Horror. The creature effects, however, are underwhelming, especially when the monster is essentially exposed towards the end as opposed to only seeing glimpses of it here and there. LEVIATHAN is worth checking out, but don't expect anything special. Perhaps I should've picked COBRA to review instead.