After dying in a car accident and ending up in a version of Hell that looks like a sewer, a young college student named Sam suddenly awakens in a hospital with a weird symbol tattooed on his arm. By his side are some familiar faces who he recognizes from the afterlife. Turns out these mysterious people escaped from Hell and brought Sam back with them, and now a group of gun-slinging bounty hunters known as Reapers are after them with the intention of killing them all and sending them back to Satan. As Sam and the escaped souls are on the run, he discovers that his girlfriend Hanna - who he was on his way to see when he died - has mysteriously vanished. While the Reapers relentlessly pursue Sam and the other escapees, Sam tries to solve the mystery of Hanna's disappearance and makes some disturbing discoveries in the process. 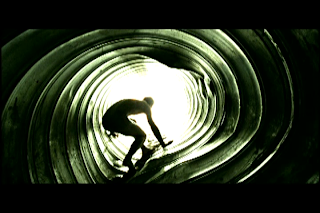 THE OTHER SIDE is directed by Gregg Bishop, whose only other feature-length directorial effort to date is DANCE OF THE DEAD, which was a well-received zombie movie that involved a group of high school students on prom night. While I was never as huge a fan of DANCE OF THE DEAD as much as other people, I appreciate what Gregg Bishop did with it, and it showed he had a lot of promise as a horror director. Around the time of the release of DANCE, I stumbled upon THE OTHER SIDE at a video store and was attracted to its artwork, which featured three shadowy characters carrying weapons and a tagline that simply read: "Fear the Reapers". 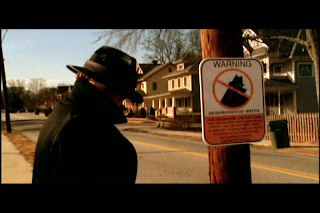 Most people would probably look at Bishop's filmography and see THE OTHER SIDE as just a stepping stone for him to make DANCE OF THE DEAD. I've seen both about three times each, and I have to say that I prefer THE OTHER SIDE, but mostly because the theme of death in film appeals to me more than zombies. Plus, the Reaper characters are cool as shit. Both movies, however, show that Bishop was a very ambitious filmmaker who didn't necessarily set out to reinvent the wheel but could take conventional horror material and put his own little spin on them. Too bad he hasn't done anything since DANCE aside from a short film.

THE OTHER SIDE starts out with a bang and maintains a fast pace well into the second act. Once the story and characters are established, there's a massacre of sorts that takes place in the hospital where Sam is resurrected. The Reapers bust in with their guns blazing (or sais twirling in the Female Reaper's case), and it isn't long before bodies are left laying. It's revealed early on that there's a whole community of people who escaped from Hell, so it becomes apparent that the Reapers have their work cut out for them. I found it strange that there are so many of these escaped souls on the run but yet they don't exatly do a good job of hiding; the tattoos (or brands) that they apparently receive while in Hell are visible on their bodies, and they congregate in open areas. Another continuity problem is that the Reapers are supposedly not allowed to kill "the living" (which is a rule they do comply with at later points in the film), but you wouldn't be able to tell this by watching the aforementioned hospital massacre, in which they brutally kill many hospital employees. The escaped souls could have been disguised as hospital workers, but this is never made clear. 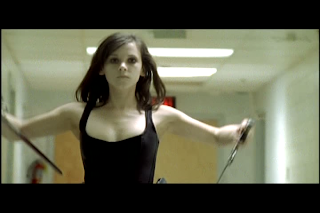 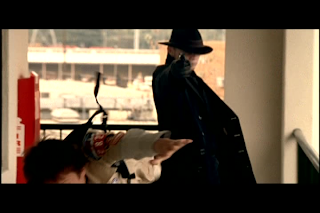 Getting back to the Reapers, I love the rules and little quirks that are established for these characters. They drive around in a Hearse (naturally) and initially arm themselves to the teeth with stolen guns once they arrive in the land of the living to claim the escaped souls. They all have different, unique looks as well, which is really cool. If one of the Reapers dies in battle, its soul instantly jumps into another body and thus another Reaper is born. At one point, they actually drive around with corpses piled in the back of their Hearse, so another fresh body will be right there and ready to jump into combat if one of them is killed. They're vicious too; none of them ever say a word, thankfully, and they're absolutely relentless when it comes to getting the job done. Needless to say, the Reapers are the highlight of this movie for me. 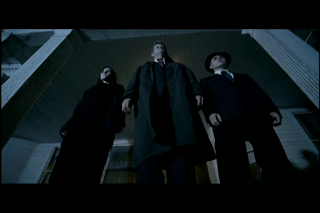 As for Sam and the escaped souls that he travels with, there are only three of them for the most part. Others come and go, but Sam and two other people are the central characters. There's a goofy comic relief character and another who's the more serious and determined of the group. It's basically your standard odd couple relationship. As the movie progresses, each of the protagonists spills their guts and confesses what they've done to end up in Hell. Sam is of course driven to find his missing girlfriend, and the others help because they see it as a way to redeem themselves. As far as the whole disappearance sub-plot, it's confusing and slightly convoluted, but it's sort of necessary for the pacing of the film. 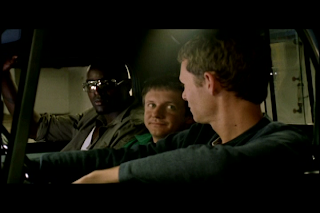 THE OTHER SIDE runs out of steam towards the end as some of the action and violence dies down so the actual story can unfold. It's certainly not the greatest movie ever made, nor does it try to be. THE OTHER SIDE is a flawed film in certain aspects and it does have a tendency to be boring in between some of the action scenes and shootouts, but when you take into consideration the fact that it was made for less than twenty-thousand dollars and is as ambitious and creative as it is, you have to admit that this film is a huge accomplishment. With me, it's not even a case of having some sort of sympathetic affection for this movie because it's low budget and has a lot of heart behind it; I genuinely like it because of how it plays with life, death, and the afterlife and presents it in the context of an action/horror movie (and also because the Reapers are awesome).