It's the year 2074 and two megacorporations are in the middle of a war to determine who gets to control the manufcaturing of cyborgs. On one side is Pinwheel, who have built self-destructive robots with the intention of using them against their rival, Kobayashi. One of Pinwheel's most promising projects is a female robot named Cash, who's being trained in hand-to-hand combat. Like the other creations of Pinwheel, Cash resembles a human and behaves accordingly with a mind that allows her to act on her own free will, albeit on a cyber-leash of sorts. She's also special in that she's not considered to be as disposable as the other robots that Pinwheel has produced. Cash is pretty oblivious to the shady business going on behind the scenes because of how much she's sheltered. That is, until a hacker named Mercy informs her that she's literally a ticking time-bomb who only exists to be used as a weapon against Kobayashi. 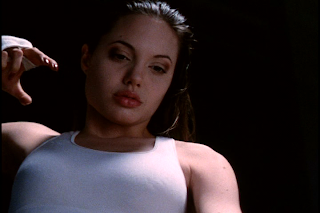 Cash and her love interest - a human named Colton - subsequently break out of Pinwheel's headquarters and make a run for it, but things take a turn when Cash's self-destrutive mechanism is activated by Pinwheel, reducing her lifespan to 48 hours. Thrown into the mix is a bounty hunter named Danny Bench, who's hired to track down and destroy the runaway cyborg and her human companion, which doesn't make a lot of sense since she's gonna die anyway. Keeping in mind that the bounty hunter is played by Billy Drago, it goes without saying that he's super creepy and sleazy as fuck. 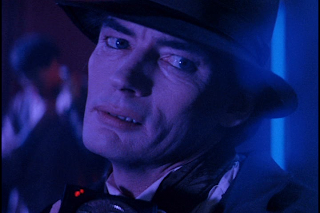 CYBORG 2 is a Sci-Fi Action movie that's sort of anchored by a love story. Oh, and it doesn't really have anything to do with the original CYBORG aside from some footage of Van Damme that they edited into this movie during a dream sequence. But anyway, Colton was Cash's combat instructor and an employee of Pinwheel, but it's made very clear early on that Colton wants to break the rules and pursue a romantic relationship with Cash, which adds an emotional element to the story. As cheesy as the love story angle is, it's fairly effective for what it is and it serves its purpose. There are some genuinely sweet moments toward the end as the relationship between Cash and Colton progresses and something is revealed in regards to Mercy and his background. Again, cheesy, but it's something, right? The film drags quite a bit once Drago comes into the picture, especially when the two leads go from being on the run to a standstill of sorts. The momentum is slowed down considerably, and, as a whole, the film is somewhat boring. 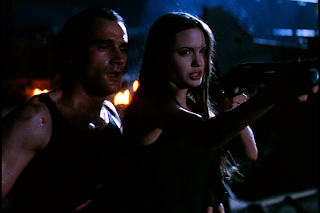 As far as the cast, Angeline Jolie hams it up, Elias Koteas is decent, and Jack Palance is surprisingly great at times; not that I expected Palance to be terrible, but it could have easily gone either way with him when you consider the fact that he's kind of slumming it in this movie. There are some really great moments with Palance towards the end of the film where he steps away from his role as the observer and reflects on his life, which goes back to what I said earlier about a certain revelation that's made in regards to his character. Billy Drago is Billy Drago: creepy and gross. I was surprised to see Sven Thorsen in this considering I had literally just watched him in the CAPTAIN POWER AND THE SOLDIERS OF THE FUTURE TV movie right before this. There's also an Asian guy who has fangs for some reason; the teeth serve no purpose, have no pay-off, and the dude can barely talk with those fake-ass teeth in his mouth. It's like he's wearing those cheap, plastic Dracula teeth you can get at Wal Mart for a dollar around Halloween season. 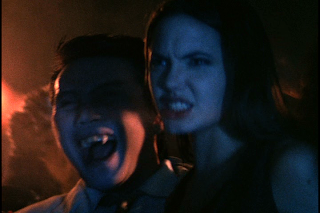 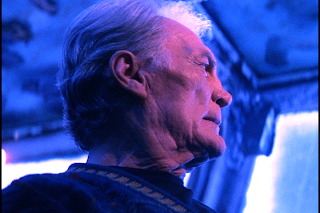 I don't know anything about the production of the film, but it's obviously safe to assume that there wasn't much of a budget, and I got the feeling from watching it that it was sort of rushed and that perhaps the director didn't really guide his actors very well. Again, these are not facts by any means and merely just an observation and assumptions on my part, but the film reeks of being directed by someone whose heart wasn't in it. That's totally understandable, though; CYBORG 2 is a cash-in and not a film with any sort of pretentiousness to it. And, despite it's flaws, it's still somewhat enjoyable for what it is. Ultimately, though, it's not a film that gives me a lot to work with as a reviewer. The action is "meh", the one-liners suck, the futuristic visuals are lackluster, and the stakes don't feel very high despite three obstacles that are established (Cash's self-destruct mechanism, Billy Drago's character, and a female assassin who works for Kobayashi). But, if CYBORG 2 sounds like something you'd enjoy, warts and all, I do think it's worth a watch, if anything just to see Angelina Jolie in a low-budget Sci-Fi/Action film.