Up in them thar hills be Motel Hello, ran by smoked meat enthusiast Vincent Smith and his sister Ida. It's established in the opening minutes of this film that Vincent sets traps on a nearby road that causes motorists to crash. He then takes the unfortunate motorists and buries them up to their necks in a garden of human heads and keeps them alive by feeding them and using hypnosis. As a precaution, Vincent removes their throats, which results in a constant gurgling noise coming from the garden. For whatever reason, Vincent decides to save a female motorist named Terry and nurses her back to health with the assistance of Ida, but it's only a matter of time before Terry learns the shocking truth about Farmer Vincents Fritters. 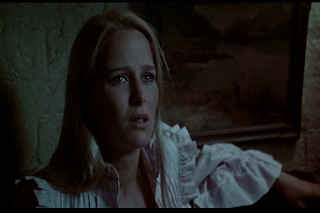 MOTEL HELL is a film that's been calling out to me for many years. Its image of a person holding a chainsaw while wearing an oversized pig head is amongst my favorites when it comes to horror movies, so it was destined that I finally check into the Motel sooner or later. I can't say that I'm crazy about Backwoods Horror movies, but I've heard MOTEL HELL referred to as one of the best examples (or at least a favorite) of the sub-genre by some reliable sources. Well, now that I've seen it, I don't know that I'd call it one of the best Redneck/Backwoods Horror movies I've ever seen, but it's certainly one of the more bizarre examples I've had the pleasure of witnessing. 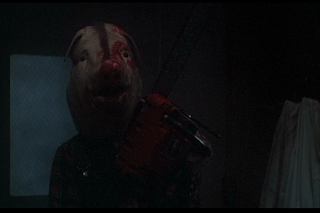 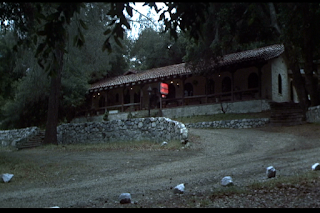 The setting for MOTELL HELL is rural as fuck. Rounding out the central characters is Vincent and Ida's brother Bruce. Not only is Bruce the Sheriff, but he's seemingly the only cop in town. Whatever the case, it's the perfect location for someone like Vincent to run his smoked meat operation considering his secret ingredient is human flesh. Speaking of which, one of the many things that makes this film stand out from its backwoods brethren is how it portrays cannibalism. In some ways, MOTEL HELL is, in a lot of ways, very similar to TEXAS CHAINSAW MASSACRE 2, but mostly in that it's a black comedy under the guise of a slasher movie and there's a culinary element to the proceedings. Aside from that, the cannibalism element of MOTEL HELL is seen as not a big deal to the people partaking in it. Vincent and Ida sincerely believe that what they're doing is no more wrong than raising pigs to be slaughtered, and therein lies one of the film's obvious social commentaries. 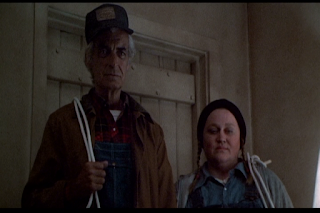 MOTEL HELL uses context and psychology to suggest that we're all a bunch of hypocrites for viewing the Smiths as antagonists when, really, they're no different than the farmers and butchers all across the world who raise animals for the purpose of consumption. At the end of the day, just because humans are more civilized than animals (although that's arguable in this day and age), does that automatically make it OK to turn a blind eye to animal cruelty? And no, this isn't me getting on a soapbox and being preachy. I eat healthy when I can and I enjoy Vegan cuisine, but I also eat meat. Being lower middle-class for a lot of my life has brought me to a place in my life where I have to take what I can get. In other words, I love animals, but I will never turn down free bacon. That being said, I appreciate how deceivingly intelligent this film is and the message that it's trying to convey. For those of you who don't listen to Grindcore, there's a band out there called Cattle Decapitation, and they're militant Vegans. The theme of a majority of their music revolves around taking the actions of those who slaughter animals and turning the tables on them; I don't know for sure, but I have a feeling the aforementioned image of chainsaw-wielding man-pig is symbolic of the animal getting its revenge on the carnivorous human. 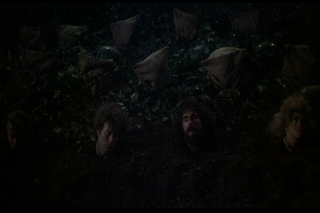 And I haven't even gotten into religion yet, which is something else that's commented on throughout the film (and not in a positive way either), but my Vibrating Bed of Pretentiousness has done its job and now I'm out of quarters. I will say, though, that Wolfman Jack shows up as a televangelist, so I guess that's pretty cool.

This is one of the rare examples of me learning to appreciate a film so much more by writing about it. As I mentioned, MOTEL HELL is a lot smarter than it looks. Also, its comedic elements are effectively dark. and the central characters are quite interesting. If we're looking at it on the surface level, though, MOTEL HELL is kinda boring, it's a tad too long, and it's not as violent or gory as its reputation and images would suggest. There's also not much of a plot; the first two acts are a repetitive cycle of motorists and customers passing through and getting caught in Vincent's web. The highlights as far as the victims are easily a kinky couple who check into the motel and are into BDSM. The pace picks up in the final act when Vincent (sort of) gets his comeuppance, but there's still not enough, for me, to propel MOTEL HELL into the "great" category of horror movies. Overall, it's an interesting little horror film with the look and feel of a 70s movie but the absurdity of an 80s movie.