If you're a cinephile and the opening of THE ABOMINABLE DR. PHIBES doesn't grab your attention, I question your legitimacy as a person with any taste whatsoever. A black-cloaked figure goes to town on a neon-lit organ as a platform raises him up from an underground lair. The cloaked figure than steps out on to the floor of his elaborate ballroom and proceeds to conduct a band of eerie-looking automatons. Subsequently, an ethereal, elaborately-dressed woman gracefully floats into the room a joins this mysterious figure in what appears to be a ceremonious dance. It's awesome, it's amazing, and it's darkly romantic. 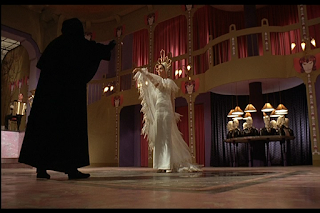 The fella in the black cloak is the eponymous (and abominable) Dr. Phibes, who was horribly disfigured from a car accident, and the woman is his mute assistant Vulnavia (Virginia North). Phibes is a tragic figure, an anti-hero, and a methodical killer who sets his sights on a group of doctors throughout the film. His motive is revenge, and the reasons behind his lust for vengeance aren't initially spelled out for you; they're gradually revealed as the movie progresses thanks to the involvement of Scotland Yard and the inherent exposition that comes with the territory of a police procedural. Meanwhile, Phibes lurks, plots, executes, plays the organ, and dances some more, all with his loyal and lovely accomplice at his side. 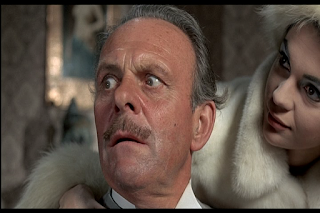 We don't really need to dissect the plot or the characters here, but one thing worth noting is Phibes's modus operandi. Whether he succeeds at exacting his revenge or not, Phibes aims to base his murders on the ten Biblical Plagues of Egypt. Ultimately, the film takes liberties with the mythology of the Plagues, but at least we get some cool set-pieces and death scenes out of it. And yes, I realize I just spoiled the fact that Phibes achieves his goal, but to what degree? Opposing him are the police and the film's protagonist, played by Joseph Cotten. Despite the fact that Phibes is a murderer, though, he's inherently likable because of the circumstances surrounding his situation. Quite often throughout the film, Phibes (who somehow speaks through a tube in the side of his neck) isolates himself from his sidekick and creepily mourns in privacy, resulting in some genuienly sorrowful moments. Plus, he's played by Vinnie Price, so you best bow down. 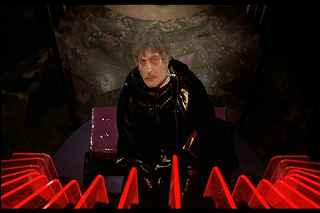 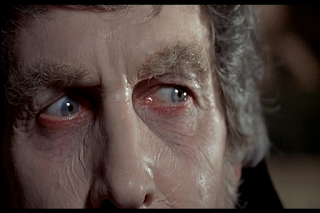 The film is considered a Horror-Comedy by some, and the film's comedic moments come during the police procedural scenes and the bickering amongst the Inspectors and whatnot. Personally, I've never been a huge fan of the older British Comedy style and timing, but it works here for me and doesn't become overwhelming or distracting at any point.

ABOMINABLE DR. PHIBES is truly unlike anything I've seen from its era, specifically UK-produced Horror. The film is set in the 1920s, so we're at least spared the obnoxious swingin' 70s culture, but, strangely, traces of the aesthetic rears its head in the form of out-of-place costumes and set decorations. Aside from its period setting, PHIBES stands out from many of its contemporaries because of its pacing and its overall style. The film doesn't fall into a lot of the traps and abide by the same rules of other Horror movies of its era. For the most part, it marches to its own beat, it's far from conventional in terms of its character psychology, and there just aren't many films like it. Sure, PHIBES has the conventions of Gothic Horror films like PHANTOM OF THE OPERA, but the style and setting of the film gives it its own flavor. To me, this resembled more of a Horror version of DANGER: DIABOLIK than anything else. Vincent Price gives an interesting performance as Phibes, no doubt understanding the camp nature of the film but never taking away from how sympathetic his character is written. Another big highlight is Virginia North. Her character, Vulnavia, is one of the coolest accomplices to murder and all-around sidekicks I've ever seen. She's incredibly loyal, stealth, eerily calm, and adorably cocky, as evidenced by how she stands off to the side and plays the violin as some of Phibes's victims slowly die. 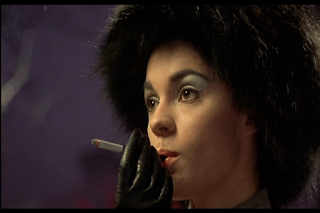 I can't stress the beauty of this film enough. It's no SUSPIRIA or BEYOND THE BLACK RAINBOW in terms of complex visuals or anything like that, but it's gorgeous in a way that it manages to maintain a solid Gothic Horror atmosphere while incorporating brightly-lit sets and vibrant colors. As for the music, it's either composer Basil Kirchin's sweeping, haunting, string-heavy score or an assortment of appropriately somber numbers from established artists, some of which were made after the 1920s (whoops!). Basically, despite its very minor flaws and historical oversights, ABOMINABLE DR. PHIBES is the sex.