This week's 13 Questions guest, Brian, is someone I've known through the blogging community for a few years now and he's someone who I've also gotten to know outside of the "blogosphere" through social media. He's a super cool dude and a human Encyclopedia of genre cinema, which comes through on his blog, Cool Ass Cinema, where he writes under the nom de plume Venoms5. He also runs a constantly-updated C.A.C. Facebook page that I highly recommend following if you're into rare behind-the-scenes photos and cool posters, amongst other things. 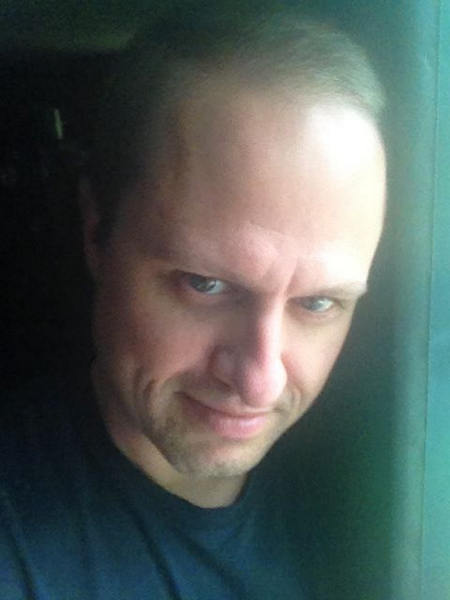 1. Who are you and where are you from?
Brian Bankston, and I'm from Newport News, VA. I've lived in North Carolina most of my life since moving here in the late 70s. I discovered kung fu movies at Drive-in's, horror on Shock Theater, and The Late Movie in the late 70s-early 80s, and haven't been the same since. This was back when you could scour the TV Guide and find all sorts of great stuff during the week, and especially on the weekends. Unfortunately, a lot of times there'd be a monster movie listed you'd want to see, but the channel wasn't available in your area, so you had to wait in the hopes it would show up on a local station. TV's still had knobs and antennas, and TV channels would sign off between 1am and 3am. It was a great time to be a little kid; especially one with a fascination for kung fu, monsters, and caterpillars. I had a preoccupation with caterpillars. I guess MOTHRA (1961) was to blame for that one. Being that I preferred Godzilla, if lizards were more accessible, I'd likely of collected them, too.

2. Where might people know you from?
Folks may, or may not know me as Venoms5, the proprietor of the Cool Ass Cinema site, and its corresponding Facebook page.

3. When it comes to what you do, who are your major influences?
As far as the writing goes, I'd have to say the late Chas Balun left a huge impression on me with his unusual, descriptive use of the English language in highlighting the nastier side of trash cinema. I always looked forward to reading his pieces (haha!) in Fangoria, Gorezone, and his own publications like Horror Holocaust, The Gore Score, and The Deep Red Horror Handbook. 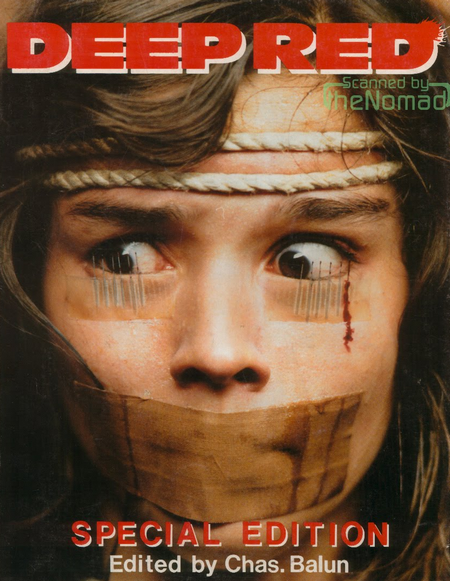 Reading those, and anything horror movie related (I never read a Stephen King book, but owned some of them) led to me having an interest in writing horror stories in school when I should have been listening to the teacher talk about his Civil War re-enactments, or whatever he was talking about that day.

I sometimes illustrated these stories, and that was from looking over my dad and uncles dozens of super hero pictures they drew when they were kids, as well as flipping through all those old comic books of theirs from the 50s and 60s.

My friend John Gainfort was instrumental in pushing me to lay claim to a small plot on the interwebs to indulge my hobby as opposed to mercilessly talking my friends heads off on subjects that may, or may not have interested them.

4. What four peoples' faces would you put on your own personal Mt. Rushmore?
Chang Cheh, for all those blood-soaked macho movies, and shaping my taste in Asian action films; Ishiro Honda for making my childhood much better than it might of been otherwise; Umberto Lenzi for introducing me to extreme horror in the mid 1980s -- and getting me in deep trouble with my grandparents; and The Incredible Sonny Chiba for his patented facial contortions and 'death stare' -- where you know any number of hooligans will have bones broken, limbs lost, or extremities extracted.

5. What's the last album you bought?
Manowar's 'Kings of Metal MMXIV', a remake of their 1988 album, 'Kings of Metal'. It was the first album I ever bought of those guys, and everything before and since. 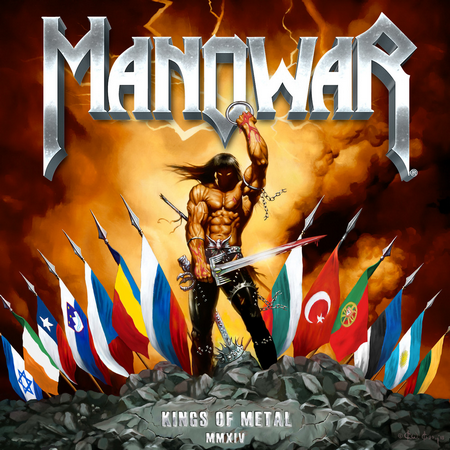 7. What's the last podcast you listened to?
The last full one I listened to was one of your TALES FROM THE DARKSIDE podcasts. Recently, I listened to a portion of one I sat in on just so I could cringe upon hearing my voice. It was a podcast about my favorite TV station growing up -- WGGT-TV48. A few of the individuals responsible for the channel were on there, and we got to talk about how they selected their films, all the horror movies they showed, and of course, Martial Arts Theater.

8. What's the last video game you played?
One of the last games I played was Red Dead Redemption, and that zombie version, Red Dead Nightmare. And it was a nightmare trying to get anywhere in that one. Oh, and the recent Twisted Metal on the PS3. I think I may have removed some hair over that one, but it was a great deal of fun playing that. The last game I completely finished was Dead Space -- a game that successfully supplants the original Resident Evil as scariest game I've ever seen.

9. What's the last book you read?
Gunnar Hansen's new book, TEXAS CHAINSAW CONFIDENTIAL: HOW WE MADE THE WORLD'S MOST NOTORIOUS HORROR MOVIE. It's one of those you just can't put down -- especially if you're a TCM fan. Leatherface is a damn witty writer. 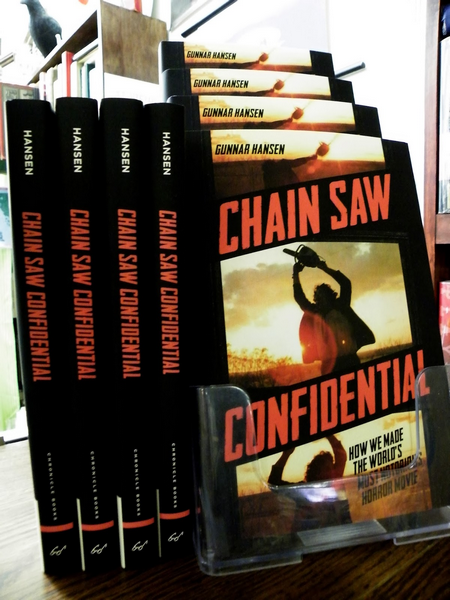 10. What are your favorite sports teams?
Other than MMA, I'm not much of a sports guy; but if this were the 80s, it would be Roller Derby. It's still around, but back then, it was on television virtually everyday. Being a huge wrestling fan back then, it was great to see skaters zipping around an oval rink and beating the hell out of one another for an hour. 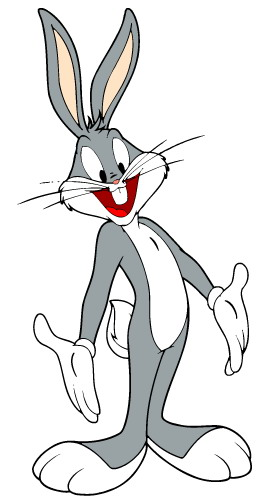 11. What cartoon or comic book character can you relate to the most?
Probably Bugs Bunny. I say that because I'm not only a smart ass, but there have been many times I should have taken that left turn at Albuquerque.

12. Create a playlist of ten songs that give people an idea of your musical taste.
In no particular order, and this list would change every 5 minutes:
1. Never Been To Spain -- Three Dog Night
2. Love's Theme -- Barry White
3. Faithfully -- Journey
4. Ennio Morricone -- Pick any Ennio. They're all great.
5. Savatage -- When the Crowds Are Gone
6. Pretty Maids -- Futureworld
7. Bonnie Tyler -- Total Eclipse of the Heart
8. Lionel Richie -- Still In Love
9. Manowar -- Battle Hymns
10. The Hues Corporation -- What the World Knows

13. If you could spend the day at an amusement park with one person from the entertainment industry, who would it be and why?
I was hoping this question would be 'Who would you hang out with at a bar all day' so I could answer Sid Haig. Since it's an amusement park, Cassandra Peterson, aka Elvira, Mistress of the Dark. I grew up on her show, Movie Macabre. It was where I first saw TOMBS OF THE BLIND DEAD, ATTACK OF THE KILLER TOMATOES, and crap like MONSTROID and BLOOD BATH (the Joel Reed one). Elvira made me quickly forget such childhood crushes as Erin Gray and Pamela Hensley from BUCK ROGERS IN THE 25TH CENTURY, and Jane Badler from the original V series. All those goofy gags she did, and she loves horror and monster movies. I'd probably ask her to marry me once the day was over, too. 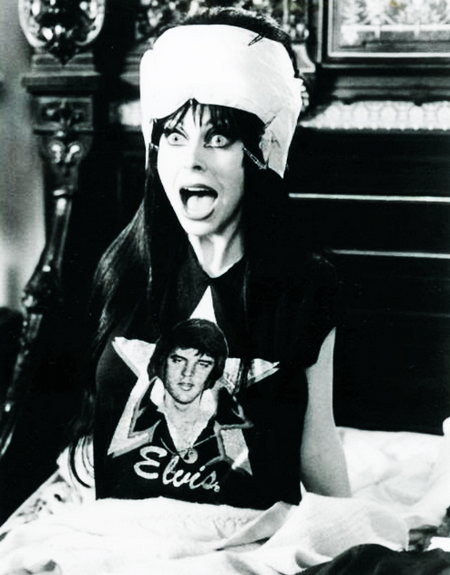